Greek Media: "Orthodoxy for the USA is like a Red Flag to a Bull"

Some who follow the media closely are positive that the anti-Church campaign in Greece is financed by the USA.


(Athens, May 22, 2015)  An anti-Church campaign is continuing in Greece. It flared up after the holy relics of Great Martyr Barbara had been brought to the country. Some who follow the media closely are positive that the campaign is financed by the USA.

“For the USA, Orthodoxy is like a red flag to a bull… This is because Orthodox peoples are friendly towards Russia. That is why in Greece in every way – through media and Non-Governmental Organizations controlled by the USA – godlessness is being promoted and the faith ridiculed. The huge influx of the faithful to the relics of St. Barbara has startled the West and caused the intensification of this propaganda,” experts of the Defencenet.gr Greek portal are convinced, reports AgionOros.

It should be noted that St. Barbara’s relics, which are permanently kept at the San Marco Basilica of Venice, were brought to Greece, and this caused a wave of negative publications in the liberal media. The event has already been called “unprecedented”.

“When we received the saint’s relics we could not imagine this enormous wave of pilgrimages to the shrine. Masses of people during the course of eight days… The fact that pilgrims are willing to queue for hours in order to venerate the precious relics of Greatmartyr Barbara arouses a bottomless depth of amazement and respect,” said Metropolitan Clement of Methoni. 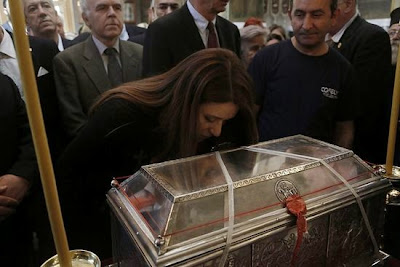 In his turn, Metropolitan Anthimos of Thessaloniki has commented on the anti-Church campaign in the Greek liberal media: “Some individuals are speaking with shallow, deceitful, unfounded fabrications, thus trying to create conditions for weakening of the Orthodox Church”.

In Metropolitan Anthimos’ view, the actions of the enemies of the Church intended for its division are hopeless: “Yes, our opinions on national interests often differ, but when representatives of Local Orthodox Churches gather together, they (whether they are Greeks, Russians, Ukrainians, other European citizens or Americans) find common language and bear witness to the Truth”.

In his speech the metropolitan responded to the critique of some Church’s enemies who are judging the clergy for wearing sumptuous church vestments: “All year round we wear a black cassock. However, according to St. Basil the Great, for the Divine Liturgy we must dress in the best ecclesiastical vestments that we have. All of us – bishops, priests, deacons, monks – wear black garments all the time as a reminder of the Passion of our Savior on the Cross. Some priests of the older generation even do not take off their cassocks at night and sleep in them. But when at the Liturgy we take the Body of Christ in our hands, shouldn’t we really clothe ourselves in other, better vestments?”