"Miracles come when they are needed, and it seems that the Holy Fire first came when it was needed most — during the time of the Islamic oppression of the Church, when the Christians suffering under the yoke of Muhammad most needed confirmation that their faith in the crucified and risen Christ was true." — Fr. Lawrence Farley

Today, May 2, 2019, the Holy Fire arrived at a wonderful parish I am closely connected to, by circumstance and by the heart. Alas, I could not travel to be with them to greet and receive the Holy Fire, brought all the way from Jerusalem, but it did spur me on to read up on the annual Miracle of the Holy Fire.

In doing so, I came across a typically wonderful article by Fr Lawrence Farley. It is his quote at the top of this post, and his observation is no less true today than it was when the Sword of Islam cut its wide and bloody swath across the Christian world, decimating churches and slaughtering and subjugating Christians across the Middle East, North Africa, and Central Asia, and even into Western Europe, the Balkans, Italy, and Russia.

Today, 80% of the countries where Christians suffer the worst persecution are Muslim majority and/or an Islamic dictatorship. Muslim persecution of Christians worldwide jumped almost 15% from 2017 to 2018, also according to Open Doors' World Watch List.

Christians in the West and in the USA and Canada are being increasingly pressured to acquiesce to the secular agenda. While open persecution of Christians in America has recently been highlighted by lawfare against Christian bakers and florists, outbursts of demonic hatred against Christians is encountered everywhere. Just recently, the peaceful Abbot Tryphon of Vashon Island was assaulted by a tormented soul who saw his cross and could not hold back his venom, and truly like a serpent, struck a potentially deadly sucker punch without any warning.

So, the Holy Fire remains with us, a visible annual miracle, a gift from God to bolster the faith of Christians the world over.

But for now, let us give thanks for this powerful miracle.

What Good is the Holy Fire? 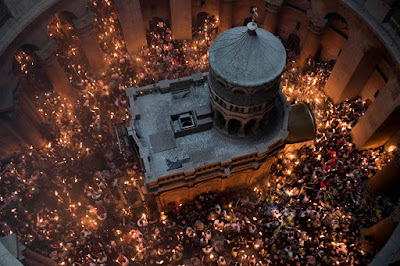 The so-called “Holy Fire” is the name given to the fire that appears on ends of the candles of the Patriarch of Jerusalem and others every Holy Saturday. The Patriarch, accompanied by a church crammed filled with others, awaits for the annual miracle every Holy Saturday. On that day the Patriarch strips himself of his holy robes and enters the Tomb of Christ with a bundle of unlit tapers, says certain prayers, and then awaits for his tapers to be miraculously lit from heaven. He is not disappointed: his tapers are miraculously lit every year and he emerges from the Tomb with the flame to the tumultuous shouting of everyone in the Church of the Holy Sepulchre.