NEW BOOK BY RAYMOND IBRAHIM: Defenders of the West: The Christian Heroes Who Stood Against Islam 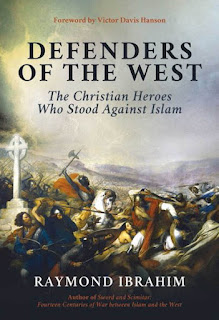 "Discover the real Count Dracula, Spain’s El Cid, England’s Richard Lionheart, and many other historical figures, whose true and original claim to fame revolved around their defiant stance against jihadist aggression. An instructive and inspiring read; whereas Sword and Scimitar revolved around decisive battles, Defenders of the West revolves around decisive men." (From the publisher's description.)

I saw the announcement of this title (just published in late July) while traveling earlier this year, and have just now purchased the Kindle edition and begun to read it. The publisher's blurb and the solid but reserved Foreword by Victor Davis Hanson don't even begin to do it justice.

Ibrahim's Introduction positively crackles with intelligence and energy, and advances with a certain intensity — even ferocity — his warnings about Islam, as well as his warnings concerning the ever weakening postmodern, post-Christian West, which in spite of its superiority in force over the Islamic world, nevertheless is feeble in its belief in and defense of its own heritage, purpose and future. This is a major book with many lessons for us, won at great cost by valiant figures of our culture's past.

The below review by Mark Tapson frames this important new work in vigorous and appropriate terms.

Order Raymond Ibrahim’s Defenders of the West: The Christian Heroes Who Stood Against Islam HERE.

Learn more about Raymond Ibrahim's writing and sign up for his regular posts HERE.

Defenders of the West

Raymond Ibrahim profiles eight heroes in the clash of civilizations. 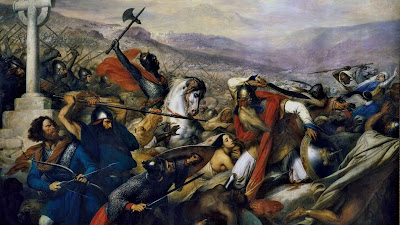 Historiography has been dominated in recent decades almost exclusively by leftists determined to take a wrecking ball to the glorious edifice of Western civilization in the name of social justice and multiculturalism. New York Times propagandist Nikole Hannah-Jones of the widely-debunked but nonetheless influential 1619 Project comes to mind. The coordinated mission of such activists has been to pervert and subvert the grand narrative of our culture into a sordid tale of oppression, exploitation, and white supremacy, and to brand all our flawed heroes as racists and knock them off their pedestals, both figuratively and literally.

This is one reason why the new book Defenders of the West: The Christian Heroes Who Stood Against Islam, by historian Raymond Ibrahim... is such a refreshing, even thrilling read. As if the title alone weren’t guaranteed to inflame Progressive sensibilities, the book is unabashedly dedicated to “all the Past, Present, and Future Defenders of that which is Good, Right, and True.” Standing up for the Good, the Right, and the True (capitalized, no less) in our postmodern, post-Christian era? That’s a bold, increasingly rare position for any historian and publisher (Bombardier Books, in this case) to take today.

Defenders is a sort of follow-up to Ibrahim’s essential 2018 book Sword and Scimitar: Fourteen Centuries of War between Islam and the West. That book centered on decisive battles in the clash of civilizations, while the newer one zeroes in on the profiles of eight decisive men in that ongoing conflict, between the 11th and 15th centuries, from Spain’s El Cid and England’s Richard Lionheart to lesser-known but no less heroic figures such as France’s Saint Louis and the “Albanian Braveheart” Skanderbeg.