Sword and Scimitar: 'Compelling Reminder of the Terrifying Dynamic which Continues to Drive the Islamic World'

An in-depth, "must read" review of Raymond Ibrahim's most recent masterwork.


Sword and Scimitar: “A Compelling Reminder of the Terrifying Dynamic which Continues to Drive the Islamic World”

Note: The following book review of Sword and Scimitar: Fourteen Centuries of War between Islam and the West was written by Terry Scambray and first appeared in the Sept. 2019 issue of the New Oxford Review:
___________________ 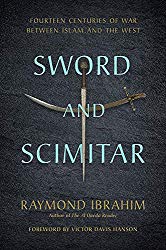 We judge individuals by what they say and what they do. We judge cults, religions and ideologies the same way; that is, by their doctrines and history.

Which is common sense, of course.

Apparently though, common sense is abandoned when it comes to ideologies like Marxism which has largely escaped such scrutiny by our schools and popular culture; and now the same cover up is happening with Islam.

But Raymond Ibrahim, fluent in Arabic, is an equal opportunity Middle East scholar committed to truth rather than conforming to dangerous fads.

Ibrahim gained attention with his revealing translations in his 2007 book, The Al Qaeda Reader, which showed the difference between what Osama bin Laden said in Arabic to Muslims and what he said for receptive, if not gullible, Western audiences.

Ibrahim’s second book, Crucified Again, showed the murder and destruction that Christians are enduring at the hands of Muslims throughout the world.

In Sword and Scimitar, Ibrahim begins by explaining Mohammed’s doctrine of jihad or “holy war”: “Whereas the rewards of the pre-Islamic tribal raid were limited to temporal spoils and came with the risk of death, the deified raid (jihad) offered rewards in the here and the hereafter – meaning it was essentially risk free – and thus led to a newborn fanaticism and determination.” In other words, robbery, murder and enslavement were sacralized and then transformed into a prodigious engine of Islamic conquest.

Conquest being the major feature of Islam’s 1,400 year history, Sword and Scimitar takes the reader on a tour – “a tour of force” – as represented by eight significant battles and an array of lesser clashes.

Skillfully relying on first person descriptions, Ibrahim’s narration of these battles is gripping and suspenseful while also evoking the pain and terror of warfare. Especially after the current revival of jihad, his recounting of these barbaric episodes and their consequences is not comforting.
Read more »
Posted by Zosimas at 9:37 PM

Video: Raymond Ibrahim - 'The Past and Present Persecution of Christians'

A brisk and essential presentation by my dear friend, the great Raymond Ibrahim, on the historical continuity of Islam's persecution of Christians, from the time of Muhammad to today.