Dr. Timothy R. Furnish: 'The Prince of Peace vs. the False Prophets of Islam'

"As certain Muslims honor the birthday of their main messianic figure, consider the superiority of Jesus."

A timely article from one of the most perceptive and knowledgeable Christian writers on Islam today, Timothy Furnish. In addition to being a regular contributor to The Stream, Tim posts on his blog, The Occidental Jihadist.

The Prince of Peace vs. the False Prophets of Islam


Yesterday was Maundy Thursday — the day on which Jesus instituted the Lord’s Supper. That evening, some 1990 years ago, Christ was arrested. Eventually He was crucified on Good Friday, which we remember today.

Yesterday was also, according to Twelver Shi`i Muslims, the birthday of their main messianic figure: Imam Muhammad al-Mahdi.


Piety Not Politics, For a Change


I am a Christian who’s been studying Islam for almost three decades. Often I write as an analyst of the Islamic world. That usually means focusing on the geopolitics of the Middle East, Islamic Africa and South Asia. But not today.

Considering the juxtaposition of Holy Week and Mahdist celebration, I want to look at the world’s second-largest religion primarily from a believer’s perspective.


Christian Views of Salvation in Other Religions


There have been three broad Christian approaches to whether salvation can be achieved in other religions. The oldest, exclusivism, said “no.” Pluralism, more recently, has said “yes.” Inclusivism, also modern, says “maybe/probably.”

"A video of the Islamic prayer released on Twitter showed one of the Muslims in the pulpit cantillating the Adhan [Islamic call to prayer] in Arabic... which unambiguously asserts that God’s revelation to Muhammad has supplanted and superseded God’s prior revelations to Moses in the Old Testament and to Jesus in the New Testament.”

With Pope Francis' ongoing initiative towards Islam, we can expect to see many more such instances of open apostasy in Roman Catholic churches.

Inviting Muslims to speak at or pray at Christian gatherings is one of the most blasphemous manifestations of the Same God Heresy. Bishops, priests and clergy who do so have openly sealed their apostasy, and should be excommunicated. And Orthodox Christian Churches, Seminaries and institutions who are in dialogue with Christian bodies who perform such scandalous acts should immediately break off their relations with them until they repent.

In related news, the Coronavirus is also being used as an opportunity to spread the virus of ecumenism in the Greek Orthodox Archdiocese:

Metropolitan Nathanael of Chicago of the Greek Orthodox Archdiocese of America of the Patriarchate of Constantinople led an ecumenical prayer service with the Catholic Cardinal and Evangelical Lutheran bishop of Chicago.

Previously, on March 14, he issued a directive ordering the immediate suspension of “all liturgical services in parishes of the Holy Metropolis of Chicago.” 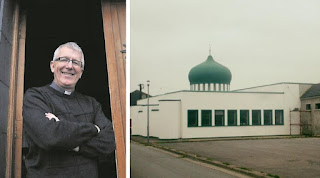 
COUNTY MAYO, Ireland (ChurchMilitant.com) Muslims, invited by a Catholic priest in Ireland to pray alongside him during the celebration of the Holy Eucharist, prayed the Adhan — the Islamic call to prayer that categorically proclaims Islam’s supremacy over its forebears — Judaism and Christianity.

Father Stephen Farragher, parish priest of St. Patrick’s Church in Ballyhaunis, County Mayo, invited two Muslims to “pray in solidarity” with him “the final blessing and prayer” at the 10 a.m. Friday Mass to be broadcast on radio, Midwest Radio Irelandreported.

Mohammed Cherbatji and Mohammed Rahmani joined Fr. Farragher to seek a blessing on all frontline health care workers and frontline workers during the pandemic and pray for the eradication of the Wuhan virus. The church was reportedly empty because of the Wuhan virus restrictions.

However, a video of the Islamic prayer released on Twitter showed one of the Muslims in the pulpit cantillating the Adhan in Arabic.

Church Militant contacted a scholar in Islamic jurisprudence and Arabic expert who confirmed that the prayer was not a blessing for health care workers but the “Islamic call to prayer, which conclusively and unambiguously asserts that God’s revelation to Muhammad has supplanted and superseded God’s prior revelations to Moses in the Old Testament and to Jesus in the New Testament.”