SIGN OF THE APOCALYPSE: Muslim 'Breaking of the Crosses' in Syracuse NY

This is surely another sign of our times, a sign of the impending apocalypse. The breaking of crosses and conversion of churches into mosques is widespread in Europe, but not yet so much in America. 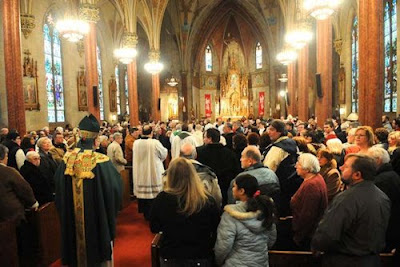 For Christians, it is a reminder of the warning of our Lord Jesus Christ: "When the Son of Man comes, will he find faith on the earth?" (Luke 18:8).

The number of crosses covered over — 10,000 — is a deeply symbolic, Biblical number, and was no doubt chosen by the Holy Trinity Church founders based on Revelation 5:11, where the seer John beholds the myriads of angels around the throne of God:

Then I looked, and I heard the voice of many angels around the throne, the living creatures, and the elders; and the number of them was ten thousand times ten thousand, and thousands of thousands...

This scene comes immediately after "the Lamb who was slain" (who is, of course, Jesus Christ) takes the scroll with the deepest mysteries of God, sealed front and back with seven seals, and is immediately praised:

Now when He had taken the scroll, the four living creatures and the twenty-four elders fell down before the Lamb, each having a harp, and golden bowls full of incense, which are the prayers of the saints. And they sang a new song, saying:

“You are worthy to take the scroll,
And to open its seals;
For You were slain,
And have redeemed us to God by Your blood
Out of every tribe and tongue and people and nation,
And have made us kings and priests to our God;
And we shall reign on the earth.” (Rev. 5:8-10)


Following this ecstatic worship of the Lamb by the four living creatures, the twenty-four elders, and the prayers of the saints, the "ten-thousand times ten-thousand" worship Him too:

“Worthy is the Lamb who was slain
To receive power and riches and wisdom,
And strength and honor and glory and blessing!”

“Blessing and honor and glory and power
Be to Him who sits on the throne,
And to the Lamb, forever and ever!”

Then the four living creatures said, “Amen!” And the twenty-four elders fell down and worshiped Him who lives forever and ever. (Rev. 5:12-14)

The whole point of chapter 5 of the Apocalypse is to show that the Lamb — Jesus Christ — is equal with God the Father, that He is worshipped just as the Father is, by all the hosts of heaven, all the saints, and by "every creature which is in heaven and on the earth and under the earth."

Such is the significance of the 10,000 crosses, and the name of the former parish, Holy Trinity. It was one of the most visible, richly symbolic representations of the Christian presence in Syracuse, and in New York State and the United States by extension.

Though it is certainly a temporal tragedy that such a symbolic church would be desecrated, let the significance of this serve to enkindle our zeal. The collapse of institutional Christianity is happening all around us, but Christ promised us that "Even the gates of hell shall not prevail against His Church."

As for observant Muslims, this will be seen as a victory over Christianity, and a powerful sign of Islam's new global resurgence, of Islam's eventual domination over the United States and the Western world, and especially, as an eschatological sign of the end times, when, Muslims believe,


Isa (the Muslim Jesus) will return and "fight the people for the cause of Islam. He will break the cross, kill the swine and abolish jizya” and establish the rule of Allah throughout the world (Hadith from Sunan Abu Dawud, Book of Battles, 37:4310).


Orthodox Christians! Let these dire signs rouse us to fervent faith and love for the Lord and His Church! As Blessed Hieromonk Seraphim of Platina wrote:

"Now one cannot be a half-hearted Christian, but only entirely or not at all."


Syracuse: Muslims cut down, paint over 10,000 crosses to convert church to mosque
Creeping Sharia — August 17, 2015 (Comments in italics below in original post.)

For background on this story, see also:


ISIS destroys Christian symbols in the Middle East. Boko Haram attacks churches and churchgoers in Africa. In the west, the process is more refined… for now.
via From church to mosque: Syracuse Islamic group cuts crosses, tries to connect to neighborhood | syracuse.com.

SYRACUSE, N.Y. — Two gray church spires grow out of a bumpy plain of city rooftops along Park Street. The skyline is the same as it has been for the better part of a century until you look closer at Holy Trinity Church: There are slim copper crescents where, for 100 years, there had been crosses.

The six crosses were removed and replaced at the end of June. Four of them were massive: 600 pounds of concrete each, and more than 4 feet tall. The step was the last, and most visible, in the building’s change from church to mosque.

The transformation has been a series of careful choices aimed at balancing the forces of two religions in a neighborhood that is shifting. The North Side, once full of Italian and German immigrants, is increasingly home to new Americans who are refugees from countries where Islam is the dominant religion.

The wood from the pews has been repurposed to fix the floor, which is where Muslims sit to pray. Painters worked to make the minbar, the pulpit where the imam stands, blend in with the stonework. The name of the mosque is Masjid Isa Ibn Maryam, which translates to Mosque of Jesus Son of Mary.

Is this the history we want to leave for future generations? It will be and it will get much worse if Muslim immigration is not halted and/or reversed very soon. More below the fold.


The cost to buy and transform the church was great: $300,000 and counting, said Yusuf Soule, the volunteer director of the North Side Learning Center, which bought the property and is overseeing the mosque construction.

But the physical work and fundraising has been the easy part of the transformation.

Soule stood inside the mosque, his nearly 7-foot frame diminished by the vastness of the space. The 50-foot ceilings seem higher than they were when there were church pews and an altar inside the building. Painters, paid and volunteer, were up on ladders for weeks, painting over some 10,000 crosses, Soule said.

The crosses were turned into other designs, or, in some cases, covered over by gray paint so they blended into the walls.

Covering those 10,000 crosses was a small feat when compared with what it took to remove the crosses from the church spires. That took months of back and forth with the city’s Landmark Preservation Board, submitting and resubmitting plans for removing the crosses and storing them onsite, which the board required.

On June 29, Paul Waelder rode a crane to the top of the church. Along with workers from Giarrosso Sheet Metal, Waelder spent two days 200 feet in the air, working first with concrete saws to remove the crosses. Then his son, David Waelder, an artist and metal worker, hammered the domes and crescents into place. The crescents are smaller, less than a foot, on top of thin metal spires. They cover up the lightning rods that were part of the crosses and had to be left to protect the building.

Paul Waelder said the high-profile job came with two stipulations: no talking to the press and no pictures or video of the cross removal.

Waelder understood. “They had a bull’s eye on their backs,” he said. “They are doing good things over there.”

So good they didn’t allow Waelder to talk to the press or allow anyone to take pictures of the crosses being taken down. Did they not want to catch Muslims cheering?

Watching the crosses come down off of Holy Trinity was hard for the people who found their spiritual home there, week after week, year after year.

Anne Angiolillo raised her 10 children spending every Sunday in the pews of Holy Trinity. She opposed taking down the crosses, and cried inside when it was done, she said.

Angiolillo moved from the neighborhood last year, but when she goes back and looks to the sky now, it seems empty. “They’re missing,” she said. “They really were a landmark.”

Even now, Soule was reluctant to have pictures taken of the massive crosses. After they were removed from the building, they were carefully wrapped in plastic and cloth. They look a bit like mummies. The two copper crosses, less than 100 pounds each, were easier to remove. They are not wrapped.

The city allowed Soule’s group to take the crosses down, but it also required them to keep the crosses at 501 Park St. Soule said the hope is that the crosses can be kept in a way that lets the public see them. But the final plan hasn’t been worked out.

Why would the city allow them to take down the crosses then keep them on site? Don’t hold your breath waiting for a plan.

Read it all to notice the inherent Islamophilia in the Muslims-good, Americans-bad puff piece by Marnie Eisenstadt.

Our previous coverage of the church-now-mosque and previous Eisenstadt Islamophilia here.