Metropolitan Tikhon: 'The way of the Church is the way of sacrifice and martyrdom'

"We are here, in North America, called to be apostles and martyrs for Christ." 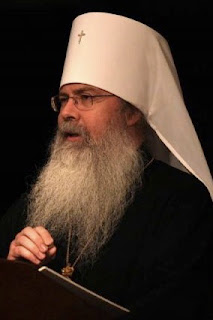 On July 20, the presiding hierarch of the Orthodox Church in America, His Beatitude Metropolitan Tikhon, delivered a significant address to the OCA's 18th All-American Council in Atlanta, Georgia.

What would he say to this important gathering? Especially in our days of such turmoil, "men’s hearts failing them from fear and the expectation of those things which are coming on the earth" (LK 21:26).

Thanks be to God, His Beatitude presented the message of the Cross and Resurrection. He wasted no time, but from the very beginning "launched out into the deep," renewing our calling as Orthodox Christians. In a manner of speaking, he "rebuked the raging sea," confronting it with calm strength founded upon the Rock. And from such a beginning, having secured his listeners' attention, he set forth his vision.

I recommend listening to the address while having the text before you, and following along. It is lengthy, about an hour and a quarter, but very worthwhile. Text, pdf and audio are available here.

Here are just a few key excerpts, followed by some remarks by Archimandrite Sergius, Abbot of St Tikhon of Zadonsk Monastery: 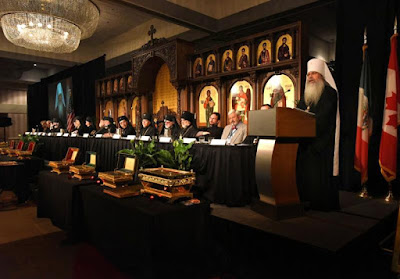 THE APOSTOLIC WORK OF THE CHURCH
ADDRESS OF THE METROPOLITAN TO THE ORTHODOX CHURCH IN AMERICA
EIGHTEENTH ALL-AMERICAN COUNCIL
ATLANTA, GEORGIA — July 20, 2015

Our goal is to seek God above all, and to let this desire illumine our work together, so that we might make our own the words of Saint Herman of Alaska:

“And I, a sinner, have tried to love God for more than forty years, and I cannot say that I perfectly love Him,” … “at least let us make a vow to ourselves, that from this day, from this hour, from this very moment, we shall strive above all else to love God and to fulfill His Holy Will!”


THE WAY OF MARTYRDOM

We gather in Council at a time when the world, as it is wont to be, is enshrouded in military conflict, economic hardship, civil war and persecution. Even if we remain somewhat shielded from these global realities in our own North American context, we nevertheless feel the weight of these worldwide struggles even as we wrestle with our own challenges in the economic, political, spiritual and moral spheres.

What can we, as the Orthodox Church in America, offer in the face of these challenges? How can we, small and numerically insignificant, imagine contributing even a bit of light in the midst of such darkness?

The way of the Church is the way of sacrifice and martyrdom – this has been so since the foundation of the Church and it remains true for us today. But it is a sacrifice that begets life and a martyrdom that is victorious in Christ’s holy resurrection. 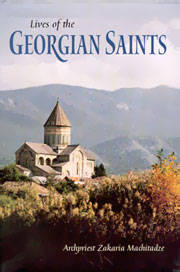 A few months ago, I made my official Irenic - peaceful - visit to the ancient Church of Georgia, a Church which has witnessed the martyric life of Christianity from its foundations even up to more recent times. Exactly four hundred years ago, in 1615, the Persian shah, Abbas I, led his great army in an attack on the country of Georgia. At one point during his campaign, he was drawn to a flaming column of light high up in the mountains of the Gareji region. He asked about it and was told that there was a great monastery located there. It was the night of Holy Pascha and the monks of the Davit-Gareji monastery were circling the Church three times with lighted candles in celebration of the Lord’s resurrection. When the Persians arrived at the monastery, the Abbot, Arsen, approached the leader and asked that the monks be given a bit more time to finish the service and for all the brothers to receive Holy Communion. The Persians allowed for this and the fathers partook of the Holy Gifts, encouraged one another, and then presented themselves clad in festive garments before the unbelievers, who straightaway beheaded the Abbot and massacred a total of 6,000 brothers.*  Those martyred brothers now “as a cloud of witnesses” intercede before the throne of God for the salvation of those in the Church of Georgia.


* This account of one of the many Muslim jihad campaigns against the Georgian Church, and the resulting "great cloud of witnesses" — martyrs — is included in The Lives of the Georgian Saints, St Herman Press, Platina CA, p 279.

My dear brothers and sisters in Christ – we cannot begin to speak about how to expand the mission, the theme of our Council this year, if we do not begin with the reality of martyrdom, which is the only authentic foundation for our Apostolic work.

Saint Tikhon of Moscow, the Enlightener of North America, understood this fully when he addressed a similar gathering to ours 106 years ago. He entitled his talk with the words which we have chosen as the theme of this week’s Council; and he did it with the full realization that the question “how to expand the mission” could only be answered with a full acceptance of the martyric life of the Church and a commitment to live that life where he was, where the Church was, and where the Church could be...

Just as the Georgian monks facing certain death on the feast of Holy Pascha, so Saint Tikhon clung to the joy and the hope of the resurrection which would be the foundation of his apostolic work, and this, without any foreknowledge of the Cross that would be his to bear as Patriarch of the Russian Church...


Is His Beatitude, through this recounting of the link between Patriarch Tikhon of Moscow's apostolic labors and his eventual martyrdom, preparing us for martyric trials ahead?  Surely we must let these words sink down into our ears — and prepare for trials — as we labor here in America.

And this from the address of Archimandrite Sergius, Abbot of St Tikhon's Monastery:

I ask you a simple question now. Do you enjoy and sense the peace, blessing and love that are given to you in the person of my Bishop and confessor, Metropolitan Tikhon? Do you sense that God is with us in a real way now in his leadership and his person?

I believe that the answer to the above is yes and I offer for your consideration that he is a direct product of St. Tikhon’s Monastery and that starting as a simple novice, history will show you that he is the first Metropolitan of this Orthodox Church in America that began as a lowly novice cleaning sinks, toilets, cooking, directing, and serving in whatever capacity he was asked … just as he serves in that same humble way now. I offer to you the product of a life of prayer, humility and of our Church’s Monastery, the Monastery of St. Tikhon of Zadonsk.

I was greatly encouraged and deeply consoled as well as inspired by the words of His Beatitude, Metropolitan Tikhon. His words and example should inspire and urge us all on to do what we can to advance the Orthodox Gospel of Jesus Christ here in the Americas. AXIOS and thanks be to God!