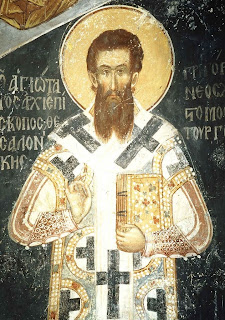 As we come to the end of the third week of Lent in the Orthodox Church, let us revisit the teachings of St Gregory Palamas (14th c.), commemorated last Sunday:

This impious people [the Muslim Turks] boast of their victory over the Rom (the Byzantines) attributing it to their love of God. This is because they do not understand that this world below dwells in sin, and that evil men possess the greater part of it… That is why, down to the time of Constantine… the idolators have almost always held power over the world...

As for Muhammad, we do not see that the Prophets bear witness of him, nor do we have the witness of him performing any miracles and noteworthy works.

It is true that Muhammad started from the east and came to the west, as the sun travels from east to west. Nevertheless he came with war, knives, pillaging, forced enslavement, murders, and acts that are not from the good God but instigated by the chief manslayer, the devil.

Islam teaches that the Church expunged the scriptural references to Muhammad. When challenged with this claim, St. Gregory responds quite vigorously:

Our Book has never deleted anything. To do so is to contend with grave and fearful curses [Rev. 22:18,19]…

Now there are some heretics who agree with you on certain subjects, but never have they brought forward this deletion of the name of Muhammad in the Gospel of Christ. Now if the Prophets had something good to say about Muhammad, they certainly would not have neglected to do so. We do read, however, that many false christs and false prophets will come to deceive many [Mt. 24:24, Mk. 13:22]. Wherefore, He [Christ] said to take heed and not be deceived [Lk. 21:8]. [15]

When pressed as to why he would not accept Muhammad, since Muslims claim to accept and properly venerate Isa (the Islamic name for Jesus), Gregory replied just as strongly:

Another disciple writes, ‘Even if an angel from heaven preach any other gospel to you than that which we have preached to you, let him be accursed’ [Gal. 1:8]. The Evangelist says, ‘Every spirit that does not confess that Jesus Christ has come in the flesh is not of God’ [1 Jn. 4:3]. How shall we accept a book (Koran) that says there shall come one (Muhammad) from God, who is not actually the Lord, when the Evangelist declares, that one is not from God, if he does not confess that Jesus, Who has come in the flesh, is the Lord? This is not possible to do—no it is not.


Much more here: St Gregory Palamas — Confessor and Defender of Orthodoxy against Islam