New Book: 'Can Islam Transform the West?: The Evidence Considered'

An essential new book from scholar and instructor William DiPuccio, "examining actual instances in which Islamists are changing, or might be changing, Western culture in regards to free speech, religious hatred and violence, antisemitism, education, and entanglements with Islamic extremism." 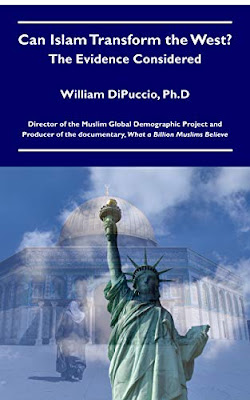 I was one of the first to purchase this new work, and eagerly look forward to reading it in the days ahead.

Bill D. (who occasionally contributes to this blog, and also helps run an Orthodox Christian study group on Islam) is a rare gift to the counter-jihad movement. Sober, precise and understated in his writing style, he allows the facts and documentation to make his case for him, without polemics or hyperbole. The result is always convincing and compelling.


There are already two reviews over at Amazon if you're inclined to see what reactions other folks have before making your purchase.

Islam has become a sensitive, political topic in America. The issue is highly polarized, pitting critics of Islam against its apologists and those who feel Islam is being unfairly maligned. This book poses the question, Can Islam Transform the West? Or, more specifically, can Islamists transform the West?

The author undertakes an even-handed, nuanced analysis by considering important differences among Muslims, looking carefully at the statistical data on Muslim beliefs and practices from numerous polls, and analyzing the ingredients which would be required to bring about cultural and political change. Unlike some presentations on this topic Dr. DiPuccio avoids hype, exaggeration, inflammatory language, and highly emotional appeals.

The book concludes by examining actual instances in which Islamists are changing, or might be changing, Western culture in regards to free speech, religious hatred and violence, antisemitism, education, and entanglements with Islamic extremism.

With 70 illustrations (including tables and graphs), and over 180 linked citations, Can Islam Transform the West? is written to raise awareness by presenting the facts and allowing readers to make up their own minds.

William DiPuccio has a Ph.D. in Religious Studies and produces articles, educational materials, and documentaries on Islam. He is the Director of the Muslim Global Demographic Project and Producer of the documentary, What a Billion Muslims Believe (YouTube).

"The invaders goaded the people to the bridge, ordering them to cross it and spit on the holy icons. Those who betrayed the Christian Faith and mocked the icons were spared their lives, while the Orthodox confessors were beheaded."

This is one of the most compelling mass-martyrdom accounts in Christian history. Of course, the "Turkmen" referred to are the Muslim Turks, who during the thirteenth century were waging jihad to expand the dar al-Islam.

Notice the practice of beheading by the Muslims, used by the Islamic State today, following the example of Muhammad, who personally beheaded between 600 and 900 Jewish men and boys from the Quraiza tribe at Medina. (See The Life of Muhammad, by Ibn Ishaq, trans. A. Guillaume, New York, 1980, pp 463-464).

The Hundred Thousand Holy Martyrs of Tbilisi are commemorated by the Orthodox Church on October 31 (which is today, on the 'Old Calendar').


In 1227 Sultan Jalal al-Din of Khwarazm and his army of Turkmen attacked Georgia. On the first day of the battle the Georgian army valorously warded off the invaders as they were approaching Tbilisi. That night, however, a group of Persians who were living in Tbilisi secretly opened the gates and summoned the enemy army into the city.

According to one manuscript in which this most terrible day in Georgian history was described: "Words are powerless to convey the destruction that the enemy wrought: tearing infants from their mothers' breasts, they beat their heads against the bridge, watching as their eyes dropped from their skulls...."

A river of blood flowed through the city. The Turkmen castrated young children, raped women, and stabbed mothers to death over their children's lifeless bodies. The whole city shuddered at the sound of wailing and lamentation. The river and streets of the city were filled with death.


The sultan ordered that the cupola of Sioni Cathedral be taken down and replaced by his vile throne. And at his command the icons of the Theotokos and our Savior were carried out of Sioni Cathedral and placed at the center of the bridge across the Mtkvari River. The invaders goaded the people to the bridge, ordering them to cross it and spit on the holy icons. Those who betrayed the Christian Faith and mocked the icons were spared their lives, while the Orthodox confessors were beheaded.

0 ye thousands of stars, the chosen people guarding the Georgian Church with your golden wings, intercede for us always before the face of God!

A superbly produced video documentary of St John of Damascus, with in-depth presentations of his denunciation of the heresy of Islam, his systematic exposition of the Orthodox Christian Faith, and his defense of the holy icons against the ruthless persecution of the iconooclasts (literally, "icon smashers").

This is yet another excellent video from Trisagion Films, which has rapidly established itself as one of the premier Orthodox Christian platforms on the internet.

The writers frame the narration using the old Chinese curse, "May you live in interesting times," noting at the conclusion that John not only lived through such "interesting times," but himself made major contributions to the defense and advancement of the Orthodox Christian Gospel during a time when the Church faced grave challenges from within and without.

Holy St John, pray to God for us!

VIDEO: Why it is of the Utmost Importance to denounce and expose the 'Same God Heresy'

At the root of today's confusion over Islam is the widespread acceptance of the 'Same God Heresy'.

"When the Church is being betrayed and the faithful led astray, it is no time for compliments and polite 'dialogues', nor for placing sympathy above truth."

Consider this brief video, and the exhortations from Church Fathers on standing for the Truth and not remaining silent when Christ is being blasphemed:


Lastly, consider this excerpt from the Epilogue to my book, Facing Islam:

WHEN I WAS A YOUNG CONVERT new to Orthodoxy, the late Archbishop Michael (Shaheen) of the Antiochian Archdiocese came to our parish. In delivering the homily, he stated unequivocally that (and I paraphrase),

“We must embrace the Muslims, the Hindus, the Buddhists, for we all worship the same God; we just worship in different ways, and are merely traveling different paths to the same destination.”

In doing so, he was blatantly standing against Jesus Christ, the Apostles, the Fathers of the Church, the Seven Ecumenical Councils, the Confessors and Martyrs and all true Orthodox believers of every age.