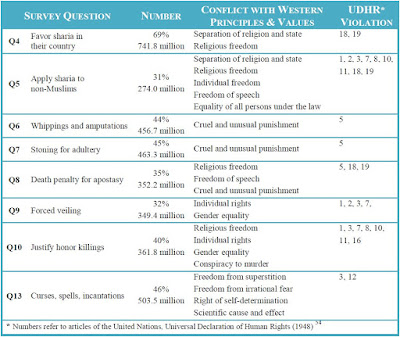 About one-third to one-half of Muslims (274.0 million - 503.5 million) in Muslim majority countries uphold beliefs and practices that are contrary to many Western values and international human rights.

This conclusion is part of my recently published study, "Muslim Beliefs & Practices: A Global Demographic Assessment."* The surveys used to compile the study were conducted by Pew Research (2008 - 2012) and covered 1.1 billion Muslims---two-thirds of the Muslim world. North America and Western Europe were not included.

The study found that though 69% (742 million) of Muslims want to live under sharia, those who support the harsh "hudud" punishments (stoning for adultery, amputation for theft, death for apostasy, etc.) ranged from 35% - 45%. Since these punishments are derived directly from the Quran, hadith, and sunna, support for them undoubtedly comes from Muslims who promote the traditional interpretation of those texts. 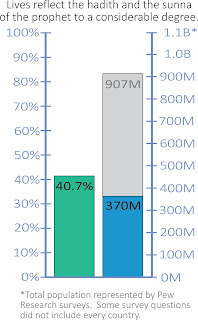 This group, consisting of 41% (369.7 million) of the survey population, believes that their lives faithfully reflect the hadith and the sunna of Muhammad. Statistically, they are not only more likely to promote the hudud punishments, but also to believe that both Islam and sharia have only one interpretation, that sharia should be the law of their country, and that proselytizing is a religious duty.

But more importantly, those who identify as devout Muslims overlap with 64% (581 million) of Muslims who believe that sharia is Allah’s revealed law, rather than a form of law developed by men and based on the word of Allah. For this reason they are more likely than other Muslims to reject the legitimacy of Western laws and government, along with the rights and values they protect.

It is highly implausible, if not naïve, to suggest that devout Muslims shed their deeply held beliefs in sharia when they immigrate to Western countries. Consequently, there is justifiable concern that immigrants from this group will have a strong impulse to resist and even change the host culture. In a 2016 French poll, 29% of Muslims said they rejected the country’s secular laws.

The full 29 page study graphs and analyzes 16 survey questions in detail, providing the historical, theological, political, and social background of Muslim beliefs and practices. It also includes an assessment of security, terrorism, and areas of potential conflict with Western culture.

'We are at a Lepanto Moment', says Roman Catholic priest at New Shrine for Persecuted Christians

“We are at a Lepanto moment in Western history,” said Father Benedict Kiely, founder of Nasarean.org... Lepanto refers to the 1571 naval battle that turned the tide for Christian forces resisting the onslaught of the Muslim invaders of the Ottoman Empire in the waters off southwestern Greece.

“We must pray with the same fervor that the Christians prayed then to save Western civilization, not just from the danger of radical Islamist extremism, but from radical, aggressive secular liberalism," added Fr Kiely.
_____________

This is a bold and, for Roman Catholicism in America, unexpected move, which we welcome for its ability to draw attention to persecuted Christians, as as well as to highlight Islam's strident antichrist theology which manifests in its doctrine of violent jihad against Christians.

With fearless Orthodox voices such as Archbishop Mark of Berlin, Fr Josiah Trenham (whose own church has been subjected to jihad threats), and of course New Martyr Fr Daniil Sysoev of Moscow (†2009), and others warning about Islam, we can hope that eventually a significant Orthodox Christian initiative will arise to provide a clear and vigorous theological and pastoral counter to the challenge of the global ascendency of a newly emboldened and muscular Islam.

See also: How the 1571 Battle of Lepanto saved Europe


The Catholic Church in New York has inaugurated the first Shrine in the world dedicated to prayer for persecuted Christians, with the blessing of the icon of Our Lady of Aradin, “Mother of the Persecuted Church,” at St. Michael’s parish Wednesday.

Cardinal Timothy Dolan, the archbishop of New York, said he hopes the shrine will be a place “to pray for all the displaced Christians of the Middle East,” and for the whole world.

“We are at a Lepanto moment in Western history,” said Father Benedict Kiely, founder of Nasarean.org, an organization dedicated to assisting “Christians suffering under the persecution of militant Islam throughout the world” and particularly in the Middle East.

The crumbling into apostasy and de facto dhimmi status of Western Christianity continues to gather momentum with yet another cathedral in the UK hosting an Islamic service.

Ramadan is the 'Month of Jihad' for Muslims, and as this news report below shows, Ramadan has become the 'Month of Apostasy' for more and more Christians.

"The cathedral announced it would “host its second Grand Iftar which, this year, will also mark the anniversary of the London Bridge attacks and will bring all communities together to celebrate Ramadan."

No prayers other than Christian prayers may be offered in an Orthodox church, and those officiated only by a consecrated Orthodox clergyman (or, if no clergy are available, by Orthodox laymen in a "Readers Service").

If an Islamic service of any kind, or a reading from the Koran, or Muslim prayers were somehow forcibly (or ignorantly, or in a modern-day spirit of multi-culti vapidity) conducted in an Orthodox church, that church would be considered defiled, a great blasphemy committed, an "abomination causing desolation" having occurred, and that church would need to be exorcised, cleansed, and completely re-consecrated before any Christian services could be held again in it. Its pastor or bishop should be severely disciplined and possibly defrocked if not excommunicated.

Why these strong words?

'First they came for Tommy Robinson...'

The UK arrested, charged, tried, convicted, and sentenced Tommy Robinson in one hour. The UK judge presiding slapped a gag order on the press. These are the actions of a totalitarian regime, one which, in this case, seems to have sold its soul to Islam.

I was immediately reminded of the poem, 'First they came...' Written by the German Lutheran pastor Martin Niemöller (†1984), the spare verse exposes the cowardice of German Christians and intellectuals during the rise of Adolf Hitler and the Nazis to power:


Since I blog about Islam (strike one), and am an Orthodox Christian (strike two), I expect in the not too distant future to find myself a target of the police and surveillance forces of the Dystopian States of America, I resolved not to remain silent about Tommy Robinson's case. Time to speak out.

Here in the USA, we have some vestigial recognition of Freedom of Speech (and Freedom of Religion), though it is under severe assault, and is being eradicated through generational displacement, as revealed by polls of college graduates over the last decade or more, who believe speech should be limited. 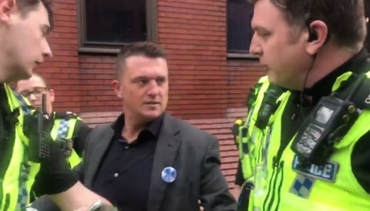 But in the UK, free speech is dead. The silencing of Tommy Robinson, whatever one thinks of his politics, persona, and approach, is its most recent and startling sign.

Several perceptive articles have drawn out the implications of the Soviet-style fast-track eradication of Robinson. Here are a few excerpts with links back to the original sites, all highly recommended:


The disappearance of Tommy Robinson: What his arrest tells us about UK’s slide toward totalitarianism


LeoHohmann.com - Mr Hohmann focuses on an article by Edward Cline at Rule of Reason (who cites the ever incisive and quotable Mark Steyn). An excerpt: