Raymond Ibrahim: 'The Dhimmi in the Mirror'


Raymond Ibrahim applies his penetrating insights into the historical continuity of Islamic persecution of Christians to the tragic case of the Coptic Pope Tawadros II's recent remarks.

It should be noted that Orthodox Christian patriarchs and bishops subjugated under Muslim rule in the Islamic world have also made similar such statements, and some have even gone much further, to the borders (and beyond?) of outright blasphemy, heresy, and apostasy:

His All Holiness Ecumenical Patriarch Bartholomew of Constantinople has written of a “dialogue of loving truth” with Islam, and of Orthodoxy having for centuries “coexisted peacefully” with Islam, and projects the chimera of an “interfaith commitment... still felt and lived by Greeks [and] Turks” as an example for all to follow (Encountering the Mystery, Ecumenical Patriarch Bartholomew, Doubleday, 2008, xxxvii, 196, 174).

Bartholomew has also called for the tearing down of “the wall of separation between East and West, between Muslims and Christians, between all religions of the world,” and has also asserted, “One who achieves the state of inner peace in relation to God is a true Muslim” (Encountering the Mystery, 205, 209).

Patriarch Parthenius of Alexandria, in the Orthodoxos Typos 854, May 1982, praised Islam and Muhammad thusly: "The Prophet Muhammad is an apostle, He is a man of God, who worked for the Kingdom of God... When I speak against Islam, then I am not found in agreement with God."

Metropolitan George Khodr of Lebanon has written: "I am completely sure that if you are a Christian and you know a lot about Islam and love what you know, your heart will embrace the Muslims around you and if you are educated, you will hold in esteem much from their religion and openly recognize the truth that is in their religion."

Christian bishops are called to "rightly divide the word of truth," not to praise a false religion, false god, and false prophet which vehemently denies Jesus Christ and violently persecutes and slaughters Christians. These false teachings are bound to at the least confuse the faithful, and at worst may lead them directly into apostasy and denying Jesus Christ.

Orthodox hierarchs, including, tragically, the "first among equals" (the Ecumenical Patriarch) who spew forth such bald faced praises of the "forerunner of the Antichrist" should be met by swift denials and cries of "ANAXIOS" from faithful Orthodox Christians who are not ashamed of the Lord Jesus Christ and care not about those who kill the body but cannot touch the soul.


The Dhimmi in the Mirror 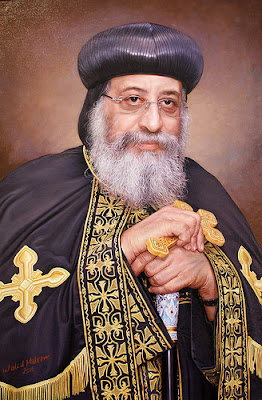 During a recent ceremony that was attended by more than 50 ambassadors and diplomats, many from Western nations, Egypt’s Coptic Orthodox Pope Tawadros II reportedly said “that Egypt had a long history and civilization and has been a model for coexistence between Christians and Muslims for 14 centuries,” to quote the online website, Egypt Independent (I cannot locate his original speech in Arabic to confirm his precise words).

This assertion raises a host of questions, from its veracity, to the reason it was uttered by the representative head of the nation’s indigenous Christians.

As to the claim itself—that “Egypt … has been a model of coexistence between Christians and Muslims for 14 centuries”—this is somewhat literally true: from Islam’s initial invasion of Egypt in the late 630s, to the present, Egypt has indeed been a “model”—a paradigm—of what happens to native Christians when Muslims conquer their territory. Even the word “coexist,” though connoting living peaceably with others, literally only means to live together (including its Arabic form, ta‘ayush).

At any rate, and as documented in my new book, Sword and Scimitar: Fourteen Centuries of War between Islam and the West, those 14 centuries saw a continuum of hostility ranging from wholesale persecution (in the worst of times) to mere discrimination (in the best of times) in Egypt. Much of this is confirmed by the History of the Coptic Patriarchs (which no doubt the latest Coptic patriarch is aware of). This multivolume account, compiled over the course of a millennium, covers the history of the Coptic Church under Islam till 1894.

Unmitigated Muslim persecution of Christians permeates its pages, including the burning and banning of churches and crosses; the fiscal extortion, slaughter, enslavement, mass rape, and forced conversion of Christians. Think what the Islamic State (“ISIS”) has been doing to Christians and others but on an exponential scale. Moreover, the persecutors weren’t “radicals” who have “nothing to do with Islam,” but leading heads of Islamic states, whether Arabs, Fatimids, Ayyubids, Mamluks, or Turks.
Read more »
Posted by Zosimas at 4:13 AM