A Koran reading in Westminster Abbey follows other recent incidents of Islam being proclaimed in Anglican cathedrals as the multifaceted apostasy of England and the COE continues to metastasize, like a spiritual cancer.

How many of the congregants took their faith in Jesus Christ seriously enough to get up and walk out of this blasphemous invasion of a Christian gathering by a hostile, antichrist spirit? I suspect the number is zero.

Protestant and Catholic England is doomed. Orthodox England is small, but holds out hope for faithful Christians.

Regarding this latest abomination, Bishop Gavin Ashenden, who resigned as Queen’s Chaplain after objecting to the reading of the Koran in Glasgow Cathedral in 2017, warns of the spiritual force of these blasphemies:


“Reading the Koran in cathedrals... validates Islam’s teaching that is predicated on the claim that the resurrection was a fraud and Jesus lied to his followers and the world.”

"By welcoming an uncritical reading of the Koran, Westminster Abbey asserts the legitimacy of Mohammad and in so doing repudiates Jesus. One has to wonder what their claim to be a Christian cathedral rests on at that point?"
— Bishop Gavin Ashenden 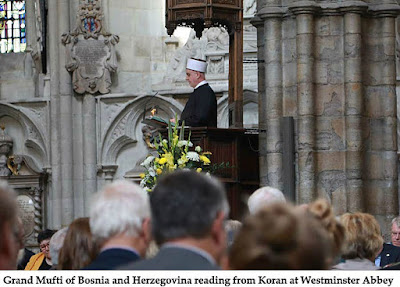 Britain’s royal cathedral—the nation’s coronation church since 1066—and the final resting place of 17 monarchs approved a Koranic reading from its lectern at a memorial service last Tuesday.

Husein Kavazović, the Grand Mufti of Bosnia and Herzegovina, read from Koran 16: 90-97 at a Service of Thanksgiving for the life of Paddy Ashdown—a British politician and former diplomat who served as leader of the Liberal Democrats.

Ashdown, who died on 22 December 2018, became a passionate advocate for the Muslims of Bosnia and Herzegovina during the wars that led to the break-up of Yugoslavia.

The Koranic reading was in Bosnian and preceded biblical readings from Isaiah 52: 7-12 and Paul’s second epistle to Timothy 4:1-7.

Expressing his consternation, Islamic jurist Yasser Hussein who spoke to Rebel Priest media, said that such an act could imply that the deceased may have secretly converted to Islam.

This early article, posted just eighteen months after the launch of the Facing Islam Blog in April 2011, holds up as a critically important document, reminding us of what one of the Orthodox Church's most significant figures and writers had to say about the false religion of Islam, and what more he might have said had his life not ended at so young an age (48) in 1982.

I had linked to this article in my recent posting of a new Russian documentary on the Life and Teachings of Father Seraphim, but this article stirred me so deeply as I re-read it, that I decided to re-post it as a reminder and encouragement to us all.

I have added a couple of insertions in brackets [...], and have improved the formatting for one paragraph, which benefits from being converted to a bulleted list. Otherwise, this is the original post, unaltered. 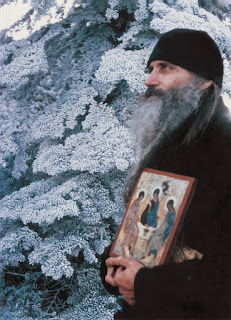 This excellent film has been out for a few years, but only recently was it given English subtitles by the Russian Faith website.
UPDATED 9/11/21: My original attempt to embed the video here failed when it was blocked by YouTube on copyright grounds, so I am simply posting the link to Russian Faith website for you to view it there.
There is still some worthy info below if you care to scroll down and explore.
My apologies for any inconvenience:
https://russian-faith.com/saints/american-monk-who-inspired-russians-video-documentary-fr-seraphim-rose-n2330

September 2 is the anniversary of the Repose of Blessed Hieromonk Seraphim Rose in 1982. Visit our Special Resource Page to learn more about this extraordinary figure in contemporary Orthodoxy.

I return to Father Seraphim Rose on this blog again and again because of his clear warnings against ecumenism and syncretism, against the tendency in our age for even well intentioned Orthodox Christians to compromise the True Faith in Jesus Christ in their confused efforts to appeal to other Christians or even to non-Christians.

Blessed Hieromonk Seraphim is widely venerated as a saint in traditional Orthodox nations such as Russia, Greece, Romania, and Serbia, and is considered by the Monks of Mount Athos as one of their own, as evidenced by photographs and icons of him seen by pilgrims to the monastic republic in northern Greece.

Pilgrims to Orthodox monasteries across North America will likewise notice photographs and the occasional icon of Father Seraphim at numerous monasteries, both men's and women's, under various jurisdictions, and there are a growing number of parishes which openly venerate Father Seraphim. Some, with direct ties to the St Herman of Alaska Monastery in Platina CA, which Father Seraphim co-founded, have secondary relics such as his vestments or other items which they make available for the faithful to venerate.

Fr. Seraphim Rose on Islam - Fr Seraphim didn't write much about Islam, or did he? A look at Fr Seraphim's teaching on the Monotheistic Religions, and how he might have approached the challenge of Islam.

This organic and heartfelt growth in the veneration of Hieromonk Seraphim of Platina, by monasteries, parishes and the faithful touched by his life and intercessions, points to his eventual glorification as a saint by the Orthodox Church... if the Lord doesn't return first.

Russians have long appreciated Fr. Seraphim Rose, the beloved Orthodox monk who started a monastery in northern California. This documentary was produced in Russian, and is available here for the first time with English subtitles.

He was a Protestant in California, an atheist genius at Berkeley, a practicing Buddhist, and finally — a Russian Orthodox Monk in the American wilderness. Fr. Seraphim Rose became a legend in Russia, where many now recognize him as a Saint.

This fascinating film was produced by NEOFIT.TV, a quality production company that creates numerous documentaries about Orthodox Christian saints, apostles, prophets, well known preachers, and Church history. Many excellent films are available on their website.