"The contrast between how Muhammad spread Islam and how Jesus sent his apostles out could not be more startling. Indeed, Jesus tells his followers, 'I send you out as sheep in the midst of wolves...' "

‘By their fruits you shall know them...'

“After the San Bernardino attacks, everybody was saying, ‘If only Americans knew more about Islam, they wouldn’t be so afraid.’ Actually, it’s the reverse.” — Bill Maher

‘I have been commanded to fight…’

The condemnations of Christianity in the Koran (cited in Part 2) have real-world implications, as can be seen in the 14 centuries of Islamic jihad and aggression, and in the modern global phenomenon of Muslim persecution of Christians. As Raymond Ibrahim painstakingly documents both in his book Crucified Again: Exposing Islam’s New War Against Christians, and in his monthly series Muslim Persecution of Christians, Islam’s jihad against Christianity spans centuries, geography, race and language, and takes exactly the same form, whether in Nigeria, Sudan or Egypt (Africa), or in Iraq, Syria, Iran or Lebanon (the Middle East), or in Pakistan, Afghanistan and all the other ‘stans (Central Asia), or in Southeast Asia, the Philippines, Indonesia, and so on.

Why is Muslim persecution of Christians so universal, and why has it been going on for 14 centuries?

It certainly can’t be a retaliation for the Crusades, as they post-date the creation of Islam by more than four centuries, and were themselves a response against relentless Islamic aggression.


Rather, the Muslim ummah was a completely new military force, which swept out of the Arabian peninsula in the mid-630s, conquering the Middle East and North Africa by the mid-7th century (and well into Central Asia in the East), followed by the Iberian peninsula (Spain), and even besieging Constantinople (for the first time) in the early 8th century. The below map shows the rapid expanse of Islam during the Arab jihad.
Read more »
Posted by Zosimas at 9:24 AM

New resource provides helpful visual for praying for persecuted Christians, with reverse side providing background info on dominant Islamic groups in each region. 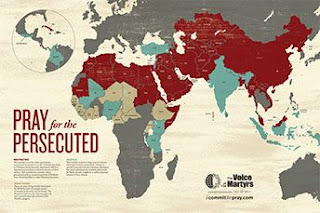 The Christian aid group Voice of the Martyrs (VOM) has published a new “Prayer Map” highlighting countries where Christians face violent persecution at the hands of Islamic extremists around the globe.

Though the primary purpose of the map is to encourage people to pray for persecuted Christians, it also seeks to educate citizens on the state of Christian persecution throughout the world, especially perpetrated by radical Islamists, as well as active engagement to assist persecuted brethren in need.

One side of the Map (pictured above right right) identifies countries where Christians are beaten, tortured, imprisoned and even killed because of their faith. The reverse side highlights nations where Christians face violent persecution by Islamic extremists, showing the dominant Islamist groups in each region.

The resource identifies the location of nine Islamic extremist groups that are actively attacking Christians, including ISIS, Al-Qaida, the Taliban, Boko Haram and Al-Shabaab, helping people get a sense of where the jihadists operate worldwide.