"The contrast between how Muhammad spread Islam and how Jesus sent his apostles out could not be more startling. Indeed, Jesus tells his followers, 'I send you out as sheep in the midst of wolves...' "

‘By their fruits you shall know them...'

“After the San Bernardino attacks, everybody was saying, ‘If only Americans knew more about Islam, they wouldn’t be so afraid.’ Actually, it’s the reverse.” — Bill Maher

‘I have been commanded to fight…’

The condemnations of Christianity in the Koran (cited in Part 2) have real-world implications, as can be seen in the 14 centuries of Islamic jihad and aggression, and in the modern global phenomenon of Muslim persecution of Christians. As Raymond Ibrahim painstakingly documents both in his book Crucified Again: Exposing Islam’s New War Against Christians, and in his monthly series Muslim Persecution of Christians, Islam’s jihad against Christianity spans centuries, geography, race and language, and takes exactly the same form, whether in Nigeria, Sudan or Egypt (Africa), or in Iraq, Syria, Iran or Lebanon (the Middle East), or in Pakistan, Afghanistan and all the other ‘stans (Central Asia), or in Southeast Asia, the Philippines, Indonesia, and so on.

Why is Muslim persecution of Christians so universal, and why has it been going on for 14 centuries?

It certainly can’t be a retaliation for the Crusades, as they post-date the creation of Islam by more than four centuries, and were themselves a response against relentless Islamic aggression.


Rather, the Muslim ummah was a completely new military force, which swept out of the Arabian peninsula in the mid-630s, conquering the Middle East and North Africa by the mid-7th century (and well into Central Asia in the East), followed by the Iberian peninsula (Spain), and even besieging Constantinople (for the first time) in the early 8th century. The below map shows the rapid expanse of Islam during the Arab jihad. 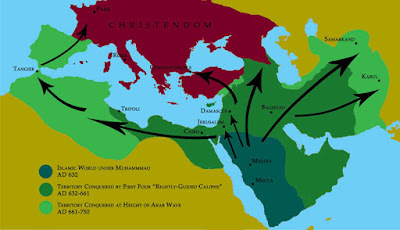 What can account for this sudden onslaught of Islamic warriors, beginning during Muhammad’s life, and increasing dramatically under the caliphs immediately after the traditional date of his death?
Certainly it must be the sense of Islam’s own “manifest destiny,” of overtaking all the world for Allah, at Allah’s specific command, and initiated by Muhammad himself.

Many do not realize that Muhammad began the global jihad by sending letters to the rulers of the kingdoms of his day, inviting them to embrace Islam, but warning them of dire consequences if they did not. This included even Emperor Heraclius of Christian Byzantium, and Chosroes of Persia, the superpowers of the 6th and early 7th centuries.

The justification behind the ever-expanding jihad is found in the Koran. Allah, who calls Christians “blasphemers” and curses them, in the Koran also commands Muslims to fight them until they submit:

The Messenger of Allah said: "I have been commanded to fight against people till they testify that there is no god but Allah, that Muhammad is the messenger of Allah, and they establish prayer and pay zakat." (Sahih Muslim 1:33)

"When you meet your enemies who are polytheists [which includes Christians, due to their worship of the Trinity], invite them to three courses of action. If they respond to any one of these, you also accept it and withhold yourself from doing them any harm. Invite them to (accept) Islam; if they respond to you, accept it from them and desist from fighting against them ... If they refuse to accept Islam, demand from them the Jizya. If they agree to pay, accept it from them and hold off your hands. If they refuse to pay the tax, seek Allah's help and fight them." (Sahih Muslim 19:4294)

Allah's Apostle said: “I have been ordered (by Allah) to fight against the people until they testify that none has the right to be worshipped but Allah and that Muhammad is Allah's Apostle, and offer the prayers perfectly and give the obligatory charity, so if they perform a that, then they save their lives and property from me except for Islamic laws and then their reckoning (accounts) will be done by Allah." (Sahih Bukhari 2:24)

The apologists for Islam, which tragically includes many Christians, cannot deny either Allah’s commands in the Koran, nor Muhammad’s example, nor how those commands and examples have been understood and zealously followed by Muslims for fourteen centuries. By its scriptures and by its fruits Islam is revealed to be anti-Christian, and Allah is revealed as commanding brutal opposition to followers of the Christian God, unless they convert to Islam or at the very least submit to its domination and pay the jizya.

‘What spirit you are of…’

The contrast between how Muhammad spread Islam and how Jesus sent his apostles out could not be more startling. Indeed, Jesus tells his followers, “I send you out as sheep in the midst of wolves...”

We’re all familiar with Jesus’ words in the Sermon on the Mount, where he teaches,

The suggestion that God is shown to be perfect through His forgiveness and care even for His enemies is brought out in Luke’s Gospel, where he relates the same teaching as, “Therefore be merciful, just as your Father also is merciful” (LK 6:36).

How interesting that Allah claims constantly in the Koran to be “The Beneficent, The Merciful,” yet his commands, his delight in punishing unbelievers, seem far removed from Jesus’ understanding of mercy.

Of course, we may fail (daily, hourly, in my case) in following Jesus’ commandments, yet this proves their divine origin. Put another way, it’s easy to curse and kill. That is baked into our fallen nature, so much so that the Old Covenant sought to channel and limit man’s anger and rage in executing justice; “an eye for an eye” limits retaliation, yet even here Jesus explicitly goes beyond human limits, using the Law as a pivot point from which to teach divine forgiveness and mercy.

Yes, there have been wars fought by Christians, wars between different Christian groups, and wars fought by Christians against believers of other religions, but there is no theocratic command or teaching on warfare in the New Testament. If anything, Jesus’ teaching on this is radically eschatological: “My kingdom is not of this world. If My kingdom were of this world, My servants would fight…” (JN 18:36).

The extreme dichotomy between Allah and the God of Christians can perhaps best be seen in how Christ and Muhammad each responded to those who rejected their message. After his hijra to Medina, Muhammad became a pirate raider and warlord, targeting caravans, cities and tribes, meting out punishment against his enemies with the sword, raping and looting as a matter of course, and leaving only destruction and misery in his wake. Islam begins its calendar not from the beginning of the revelations to Muhammad, but from his hijra, after which he grew into the warlord prophet and Islam became complete, finding its mission as the power of Allah on earth to force submission to his rule (and the rule of Muslims).

Yet Jesus rebukes even any hint of such a destroying spirit in His disciples, as seen in this passage:

Now when it came to pass, when the time had come for Him to be received up, that He steadfastly set His face to go to Jerusalem, and sent messengers before His face. And as they went, they entered a village of the Samaritans, to prepare for Him. But they did not receive Him, because His face was set for the journey to Jerusalem. And when His disciples James and John saw this, they said, “Lord, do you want us to command fire to come down from heaven to consume them, just as Elijah did?”

But He turned and rebuked them, and said, “You do not know what manner of spirit you are of. For the Son of Man did not come to destroy men’s lives, but to save them.” And they went to another village (Lk 9:51-56, emphasis added).

I would go so far as to say that Muhammad — and therefore Islam — is revealed to be of the spirit of the Destroyer, “in Hebrew Abaddon, in Greek Apollyon,” who is “the angel of the bottomless pit” referenced in the Apocalypse of John (Rev. 9:11). It is this “spirit” which is opposed to the Christian God, and which does all it can to degrade, usurp, assimilate and overthrow traditional Christianity.