"While relying on the figures of the Old and New Testaments—for the weight of antiquity and authority attached to their names—Islam completely recasts them in a manner that validates itself and invalidates Judaism and Christianity.  This would seem to burn rather than build bridges."

As we enter into the Nativity Fast and the Advent/Christmas season, it seems an especially proper time to post some recent articles of a theological nature. This new piece by Raymond Ibrahim surveys numerous examples of how Islam strives to appropriate Jesus Christ, Abraham, and a whole range of Old and New Testament figures, and even some Christian saints, but as Muslim heroes, distorting historical fact and mutilating their actual theological and spiritual message and import.

This is a well known tactic of Muslim 'dawah' which dates back to Muhammad himself, and must be exposed as one of the primary lies of the Same God Heresy which Islamic apologists and well intentioned but gullible Christians so often promote. 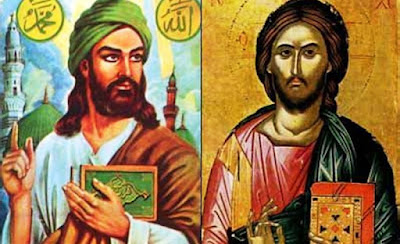 Not only does Islam claim Abraham, Moses, and Jesus; it apparently claims post biblical figures, such as Saint George, as well.  So states a recent article on My London, the real point of which is apparently to assert Christian and Muslim “commonalities.”  Thus, we learn that “on St George’s Day, which in Eastern Christianity is marked on May 6, Muslims in the area [of Nazareth] join Christians in their venerations of the saint.”

Judaism also finds its way into this article on religious syncretism: “According to some Sufi traditions, the [Hebrew] Prophet Elias, Al-Khidr [a character in the Koran], and Saint George are all the same person. They believe Elias reappears at different times in human history under different names to help stricken believers in times of crisis.”

The entire article is a testimony to the widely entrenched conviction that, because Judaism, Christianity, and Islam share many of the same characters, creating rapprochement between the three faiths is not just easy; it’s the most natural thing to do.

Left out of this calculus is the all-important fact that Islam does not treat biblical characters the way Christianity does.  Christians accept the Hebrew Bible, or “Old Testament,” as it is. They do not add, take away, or distort the accounts of the patriarchs that Jews also rely on.

Conversely, while also relying on the figures of the Old and New Testaments—for the weight of antiquity and authority attached to their names—Islam completely recasts them in a manner that validates itself and invalidates Judaism and Christianity.  This would seem to burn rather than build bridges.

Consider, for example, Islam’s treatment of Jesus (‘Isa in the Koran).  Not only does Islam vehemently deny Christ’s sonship to God, a new book on Islamic sources inadvertently underscores the fact that ‘Isa is the antithesis of Jesus—his doppelganger.