(VIDEO) Mark Durie - The Hidden History of the Qur’an

How the text of the Qur’an tells a ‘hidden’ story about its own origins.

In his recent book, The Qur’an and its Biblical Reflexes, and in this video (from the June 11, 2020 live webinar), Mark Durie explores how the text of the Qur’an tells a ‘hidden’ story about its own origins, one which is different from the conventional account.

The Qur’an is a difficult book to read and understand. Within the religion of Islam, its text has always been read, explained and understood through the lens of the biography of Muhammad, which was itself based on later, sources committed to writing more than a century after the Qur’an came into existence.

This is a story about a small religious community, not located in Mecca, but somewhere else, enjoying a more moderate climate suited to agriculture but vulnerable to earthquakes, which found itself facing an existential theological crisis. Tune into this webinar to hear Mark Durie tell the story of how this crisis was resolved, and the momentous consequences which continue to influence the lives of billions, right down to the present day.

Arabic-speaking Muslim converts to Christ warn that Roman Catholic support of the Abu Dhabi Declaration "is not based on the 'Islamic theological implications of the Arabic text', and this reflects an inability to see through the 'deception' and fall for the 'fake human rights rhetoric'."

In short, these brave converts to Christ are warning against the Same God Heresy.


Their point is well taken, and fully in keeping with the teaching of the New Testament, which warns against accepting a false gospel, a different Jesus, and a different spirit:

“I am astonished that you are so quickly deserting the one who called you by the grace of Christ and are turning to a different gospel—which is really no gospel at all. Evidently some people are throwing you into confusion and are trying to pervert the Gospel of Christ. But even if we or an angel from heaven should preach a gospel other than the one we preached to you, let him be anathema!” (Gal 1:6-8).

"As we said before, so say I now again: If any preach any other gospel unto you than that which you have received, let him be anathema" (Gal 1:8-9).

"Now the Spirit expressly says that in the latter times some will depart from the Faith, giving heed to deceiving spirits and doctrines of demons, speaking lies in hypocrisy" (1 Tim 4:1-2).


The indefatiguable Robert Spencer of Jihad Watch offers this warning in his post on the article:

“The chasm between Islam and Jahiliyyah [the society of unbelievers] is great, and a bridge is not to be built across it so that the people on the two sides may mix with each other, but only so that the people of Jahiliyyah may come over to Islam.” — Sayyid Qutb, Milestones, chapter 10. (Mother Mosque Foundation edition p. 140)

It is abundantly clear from this report that the Muslim framers of the bu Dhabi declaration were following Qutb’s guidance and crafting a document designed to lead Catholics to Islam. Meanwhile, the Catholic partners in the dialogue had no idea that this was happening, and assumed that their partners were operating in good faith as they were. Their naivete will cost the lives of the Christians murdered in the lands of Islam while no one speaks up for them, for fear of harming the dialogue, much less lifts a finger to defend them.

“Leave them; they are blind guides. And if a blind man leads a blind man, both will fall into a pit.” (Matthew 15:14)


ROME (ChurchMilitant.com) – A network of Muslim converts, who face the death penalty for apostasy from Islam, are denouncing the Abu Dhabi declaration as a “deception” for “subtle but significant differences” in the Arabic text of the document. 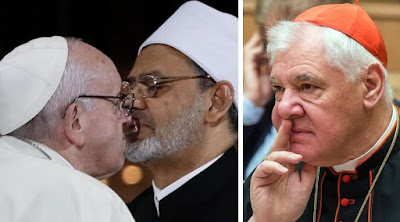 The ex-Muslims from the Arab world are also lamenting Cdl. Gerhard Müller’s naïveté after the orthodox prelate defended the covenant on Human Fraternity for World Peace and Living Together in the May-June issue of Communio.

Müller insists that the text focuses on “fundamental human rights” with “God as their originator and guarantor,” because “all people are born free and equal in dignity and rights” and “human rights are based on the dignity that God himself bestowed on every human being.”

In a preliminary analysis of the declaration shown to Church Militant on condition of anonymity, the Arab-speaking converts say that Cdl. Müller’s reading is not based on the “Islamic theological implications of the Arabic text,” and this reflects his inability to see through the “deception” and fall for the “fake human rights rhetoric.”