"Historic covenant with leaders of the world’s major faiths, [pushes] us much closer to a one-world religion, one of the major goals of the New World Order.


"...The signing of this covenant was done 'in front of a global audience of religious leaders from Christianity, Islam, Judaism and other faiths'."


This is a shocking followup report to this story by Leo Hohmann which I posted on 7/26/19. The sources adduced in this news report make it clear that this was a global event, attended and signed by world religious leaders, and kept out of the mainstream media, which makes this far more disturbing than had I had previously thought. This is ominous in the extreme, unleashing demonic forces of apostasy upon Christians around the world. I will try to find more info on the attendees, and especially if there were Orthodox bishops who signed this covenant of apostasy.

We live in dark times indeed. Be forewarned and watchful, as many false prophets and false, hireling shepherds have gone out into the world, deceiving the flock. Time again to re-post what I had warned in my book, Facing Islam (p.87):

Against the Different Gospel — the Same God Heresy we have identified in this chapter — put forth by Islam and promoted by unwitting Christians, the Holy Apostle Paul warns us today most urgently:

"As we said before, so say I now again: If any preach any other gospel unto you than that which you have received, let him be anathema" (Galatians 1:8-9).

"Now the Spirit expressly says that in the latter times some will depart from the Faith, giving heed to deceiving spirits and doctrines of demons, speaking lies in hypocrisy" (1 Timothy 4:1-2 ).

And the Beloved Disciple and Evangelist, John warns just as severely: 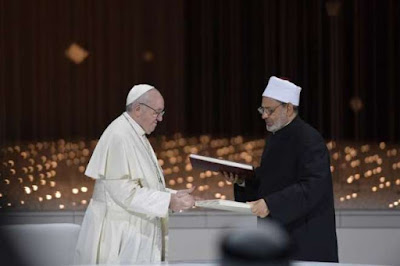 Pope Francis, who has previously called for a “one world government” to “save humanity”, has now signed a historic covenant with leaders of the world’s major faiths, pushing us much closer to a one-world religion, one of the major goals of the New World Order.

According to the document produced by Pope Francis and published on the Vatican’s official website, all religions must be considered equal, and Islam is as acceptable to God as Christianity.

Disturbingly, world religious leaders are also now coming together as one to preach from the same hymn sheet as Pope Francis, instructing their sheep to accept the final components of the New World Order’s one world government.

The historic interfaith covenant was signed by leaders of the world’s major faiths in the Middle East this month, and despite the extraordinarily high-profile nature of the attendants, the mainstream media has entered almost complete blackout mode and is refusing to report on the story.

Sheikh Ahmed al-Tayeb, the most important imam in Sunni Islam, arrived at the signing ceremony in Abu Dhabi with Pope Francis “hand-in-hand in a symbol of interfaith brotherhood”, exactly as foretold in prophecy regarding the rise of the Antichrist.

But this wasn’t just a ceremony for Catholics and Muslims. The reality is much darker than that.

According to a British news source, the signing of this covenant was done “in front of a global audience of religious leaders from Christianity, Islam, Judaism and other faiths”…

The pope and the grand imam of al-Azhar have signed a historic declaration of fraternity, calling for peace between nations, religions and races, in front of a global audience of religious leaders from Christianity, Islam, Judaism and other faiths.

Pope Francis, the leader of the world’s Catholics, and Sheikh Ahmed al-Tayeb, the head of Sunni Islam’s most prestigious seat of learning, arrived at the ceremony in Abu Dhabi hand-in-hand in a symbol of interfaith brotherhood.

As an important aside, the Guardian story linked immediately above also includes these expressions of taqiyya:

Sheikh Tayeb, who addressed the pope as “my dear brother”, said millions of Muslims had paid the price for the actions of “a handful of criminals” following the 9/11 terrorist attacks.

The media had portrayed all Muslims as “savage barbarians” and had “installed fear in the hearts” of people in the west, he said. “All religions agree that God forbids killing.”


Of course, the media portrayed Muslims as victims who lived in fear of a "backlash" from American Christians which never came. And, regarding the Sheikh's claim, "All religions agree that God forbids killing," this is simply untrue regarding Islam, which mandates violent jihad against non-Muslims. One example out of hundreds of the Islamic teaching on jihad is found in the book 'Reliance of the Traveler', which is based on the Koran and the Hadith (sayings and traditions of Muhammad):


Jihad means to war against non-Muslims, and is etymologically derived from the word mujahada signifying warfare to establish the religion.

The scriptural basis for jihad, prior to scholarly consensus (def: b7) is such Koranic verses as:

and such hadiths as the one related by Bukhari and Muslim that the Prophet said:

“I have been commanded to fight people until they testify that there is no god but Allah and that Muhammad is the Messenger of Allah, and perform the prayer, and pay zakat. If they say it, they have saved their blood and possessions from me, except for the rights of Islam over them. And their final reckoning is with Allah”;

and the hadith reported by Muslim,

“To go forth in the morning or evening to fight in the path of Allah is better than the whole world and everything in it.”

Jihad is a communal obligation. (o9.1)

The caliph makes war upon Jews, Christians, and Zoroastrians... until they become Muslim or else pay the non-Muslim poll tax. (o9.8)

The caliph fights all other peoples until they become Muslim. (o9.9)

Returning to the NewsPunch article:

In other words, there was a concerted effort to make sure that all of the religions of the world were represented at this gathering.

According to the official Vatican website, a tremendous amount of preparation went in to the drafting of this document, and it encourages believers from all religions “to shake hands, embrace one another, kiss one another, and even pray” with one another…

The document, signed by Pope Francis and the Grand Imam of al-Azhar, Ahmed el-Tayeb, was prepared “with much reflection and prayer”, the Pope said. The one great danger at this moment, he continued, is “destruction, war, hatred between us.” “If we believers are not able to shake hands, embrace one another, kiss one another, and even pray, our faith will be defeated”, he said. The Pope explained that the document “is born of faith in God who is the Father of all and the Father of peace; it condemns all destruction, all terrorism, from the first terrorism in history, that of Cain.”


There is a lot of language about peace in this document, but it goes way beyond just advocating for peace.

Over and over again, the word “God” is used to simultaneously identify Allah and the God of Christianity. Here is just one example…

We, who believe in God and in the final meeting with Him and His judgment, on the basis of our religious and moral responsibility, and through this Document, call upon ourselves, upon the leaders of the world as well as the architects of international policy and world economy, to work strenuously to spread the culture of tolerance and of living together in peace; to intervene at the earliest opportunity to stop the shedding of innocent blood and bring an end to wars, conflicts, environmental decay and the moral and cultural decline that the world is presently experiencing.


On top of that, the document also boldly declares that “the diversity of religions” that we see in the world was “willed by God”…

Freedom is a right of every person: each individual enjoys the freedom of belief, thought, expression and action. The pluralism and the diversity of religions, colour, sex, race and language are willed by God in His wisdom, through which He created human beings. This divine wisdom is the source from which the right to freedom of belief and the freedom to be different derives. Therefore, the fact that people are forced to adhere to a certain religion or culture must be rejected, as too the imposition of a cultural way of life that others do not accept;


In essence, this is saying that it is the will of God that there are hundreds of different religions in the world and that they are all acceptable in His sight.

We know that the elite want a one world religion, but to see the most important clerics from both Catholicism and Islam make such a dramatic public push for it is absolutely stunning.