"We in the West have not experienced [persecution] very much... but I think we're going to. I think it's coming to this country."

Pastor Brunson was imprisoned for his Christian Faith in rapidly re-Islamizing Turkey, whose President Recep Tayyip Erdoğan has designs on restoring the former supposed glory of the Ottoman Caliphate.

Having returned from his ordeal in an authoritarian Islamic state, Pastor Brunson sees America with fresh eyes and a clear mind.

Let us heed his warnings and prepare ourselves for the trials ahead. 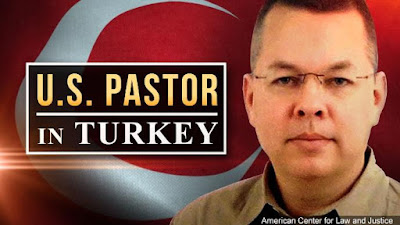 Pastor Andrew Brunson lived as a missionary pastor in Turkey for decades until being detained in October 2016, following an alleged failed coup attempt against Turkish President Recep Tayyip Erdoğan. His arrest sparked a diplomatic spat between Turkey and the U.S. in which President Trump involved himself personally.

During an interview at the Western Conservative Summit, held annually by the Centennial Institute at Colorado Christian University, Brunson claimed that the Judeo-Christian basis for American values is eroding.

"First of all, I think it's coming to the U.S., that there will be persecution," he said. "I was isolated for a few years, and coming back to the states was almost like coming back to a different country in many ways. And I'm really astounded at the speed with which, I think, the U.S. is imploding."

"There are any number of issues where it seems that it's no longer enough for a person of faith to get along with, or to serve, or to treat well someone they disagree with," he continued. "And I think that the political business, media, celebrity class, and also academia, it seems that there's much more of a demand that people of faith approve of, that they validate, that they celebrate things that they actually disagree with."

"Persecution is nothing new," Brunson said, explaining how Christianity is being "wiped out from the Middle East."

"The thing is, that we in the West have not experienced [persecution] very much," Brunson continued. "It's very unusual for a Westerner to be arrested for his faith. So we haven't experienced it, but I think we're going to. I think it's coming to this country."

After his tense final trial in a Turkish courtroom in October 2018, the judges issued a sentence of three years, one month, and 15 days, minus time served, as well as a fine, but allowed Brunson to return home. Within 24 hours, he was meeting with President Trump in the Oval Office, where he asked God to grant the president "supernatural wisdom."

"I think he has a big heart and that he genuinely cares about setting people free — people like me," Brunson said of Trump.