SIGN OF THE AGE: 'Muslims destroying Christian crosses all over the world'

"Islamic hostility to the cross is an unwavering phenomenon — one that crosses continents and centuries, one that is very much indicative of Islam's innate hostility to Christianity." — Raymond Ibrahim

In my book, Facing Islam, I discuss how Islamic eschatology, based of course on the Koran and the Hadiths about Muhammad, preaches a false Jesus, the Muslim prophet "Isa," who will return to destroy Christianity and "break the crosses":

In Islam, Prophet Isa is expected to return, but to condemn the Christians’ misunderstanding of him as divine and to literally destroy Christianity and judge all non-Muslims; the Koran universally brands all unbelievers as “the vilest of creatures” (Sura 98:6).

The Prophet Isa will be a “good Muslim,” and will direct his followers to the Mahdi, the Muslim messiah, before taking a subservient position somewhat behind the Mahdi. Isa will “fight the people for the cause of Islam. He will break the cross, kill the swine and abolish jizya” and establish the rule of Allah throughout the world. (Hadith from Sunan Abu Dawud, Book of Battles, 37:4310)

The breaking of crosses is a potent symbol of Muslim belief in Islam's global supremacy in the end times. Thus the demolition of churches and crosses, or converting churches into mosques, is a classic trait of Islam's treatment of Christians wherever it has conquered for fourteen centuries now. In our days, Muslims are even taking to breaking crosses in cemeteries, as seen in the infamous YouTube videos of 2012.

In Syracuse NY we recently saw the "breaking of the crosses" on a huge scale; a venerable Roman Catholic church was converted into a mosque, the crosses removed from the spires, and 10,000 crosses in the interior covered over in a hugely symbolic victory for Islam (facilitated by the Roman Catholic archdiocese agreeing to sell the church to a Muslim group in the first place).

See also Raymond Ibrahim's recent article, 'Islamic Hate for the Christian Cross', and my own piece,  'Islam's Hatred of Holy Icons — and what that means for Persecuted Eastern Christians'. 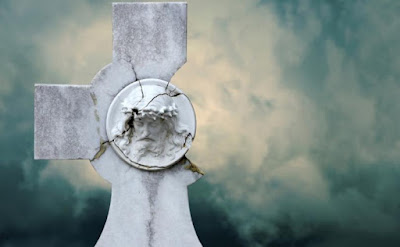 Muslims destroying Christian crosses all over the world, and no one reports it


June 10, 2019 (American Thinker) — A Muslim migrant in Rome recently stabbed a Christian man in the throat for wearing a crucifix around his neck. The assailant, a 37-year-old Moroccan, is accused of attempted homicide; "religious hate" is cited as an "aggravating factor" in the crime.

This is hardly the first "religious hate" crime to occur in the context of the cross in Italy. Among others,


What is it about the crucifix that makes some Muslims react violently? Islamic hostility to the cross is an unwavering phenomenon — one that crosses continents and centuries, one that is very much indicative of Islam's innate hostility to Christianity.

Muhammad reportedly "had such a repugnance to the form of the cross that he broke everything brought into his house with its figure upon it."


For starters, not only is the cross the quintessential symbol of Christianity — for all denominations, including most forms of otherwise iconoclastic Protestantism — but it symbolizes the fundamental disagreement between Christians and Muslims. As Professor Sidney Griffith explains, "[t]he cross and the icons publicly declared those very points of Christian faith which the Koran, in the Muslim view, explicitly denied: that Christ was the Son of God and that he died on the cross." Accordingly, "the Christian practice of venerating the cross ... often aroused the disdain of Muslims," so that from the start of the Muslim conquests of Christian lands there was an ongoing "campaign to erase the public symbols of Christianity, especially the previously ubiquitous sign of the cross."

This "campaign" traces back to the Muslim prophet Muhammad. He reportedly "had such a repugnance to the form of the cross that he broke everything brought into his house with its figure upon it," wrote one historian (Sword and Scimitar, p. 10). Muhammad also claimed that at the end times, Jesus (the Muslim "Isa") himself would make it a point to "break the cross."

Modern-day Muslim clerics confirm this. When asked about Islam's ruling on whether any person — in this case, Christians — is permitted to wear or pray before the cross, Sheikh Abdul Aziz al-Tarifi, a Saudi expert on Islamic law, said, "Under no circumstances is a human permitted to wear the cross," nor "is anyone permitted to pray to the cross." Why? "Because the prophet — peace and blessings on him — commanded the breaking of it [the cross]."

Islamic history is a reflection of these sentiments. For instance, the aforementioned Sheikh al-Tarifi also explained that if it is too difficult to break the cross — for instance, a large concrete statue — Muslims should at least try to disfigure one of its four arms "so that it no longer resembles a cross." Historic and numismatic evidence confirms that, after the Umayyad caliphate seized the Byzantine treasury in the late seventh century, it ordered that one or two arms of the cross on the coins be effaced so that the image no longer resembled a crucifix (Sword and Scimitar, p. 54).

Testimonies from the very earliest invasions into Christian Syria and Egypt of Muslims systematically breaking every crucifix they encountered abound. According to Anastasius of Sinai, who lived during the seventh-century Arab conquests, "the demons name the Saracens [Arabs/Muslims] as their companions. And it is with reason. The latter are perhaps even worse than the demons," for whereas "the demons are frequently much afraid of the mysteries of Christ," among which he mentions the cross, "these demons of flesh trample all that under their feet, mock it, set fire to it, destroy it" (Sword and Scimitar, p. 27).

Reminiscent of the recent drawing of a cross in fecal matter on a French church, in 1147 in Portugal, Muslims displayed "with much derision the symbol of the cross. They spat upon it and wiped the feces from their posteriors with it." Decades earlier in Jerusalem, Muslims "spat on them [crucifixes] and did not even refrain from urinating on them in the sight of all." Even that supposedly "magnanimous" sultan, Saladin, commanded "whoever saw that the outside of a church was white, to cover it with black dirt" and ordered "the removal of every cross from atop the dome of every church in the provinces of Egypt" (Sword and Scimitar, pp. 171, 145, 162).

Lest Muslim hostility to the cross still seem aberrant — limited to some obscure saying of Muhammad or "ancient history" — below is a very partial list of examples of how the crucifix continues to throw even "everyday" Muslims into paroxysms:

Egypt: A young Coptic Christian woman named Mary was mauled to death when her cross identified her as a Christian to Muslim Brotherhood rioters. Similarly, 17-year-old Ayman, a Coptic student, was strangled and beaten to death by his Muslim teacher and fellow students for refusing to obey the teacher's orders to cover his cross.

Pakistan: When a Muslim man saw Julie Aftab, a Christian woman, wearing a cross around her neck, he attacked her, forced battery acid down her throat, and splashed it on her face — permanently damaging her esophagus, blinding her in one eye, and causing her to lose both eyelids and most of her teeth.

Turkey: A 12-year-old boy in Turkey wearing a silver cross necklace in class was spit on and beaten regularly by Muslim classmates and teachers.

Malaysia: A Christian cemetery was attacked and desecrated in the middle of the night by unknown persons in the Muslim-majority nation. Several crosses were destroyed, including by the use of "a heavy tool to do the damage." Separately, a Muslim mob rioted against a small Protestant church due to the visible cross atop the building of worship. It was quickly removed.

Maldives: Authorities had to rescue a female Christian teacher after Muslim "parents threatened to tie and drag her off of the island" for "preaching Christianity." Her crime was to draw a compass — which was mistakenly taken for a cross — as part of a geography lesson in class.


As Islam's presence continues to grow in Europe, it should come as no surprise that attacks on crosses are also on the rise. Aside from the aforementioned attacks in Italy, the following occurred either in France and Germany, where attacks on churches and crosses have become endemic:


Such is the history and continuity of Islamic hatred for the cross — that symbol that represents the heart of the Christian faith, namely the death and resurrection of Christ, two events Islam vehemently denies.

The jihad on the cross began with Muhammad, was carried out by early caliphs, and continues to this day by jihadis of the world, not to mention the occasional "everyday" Muslim.
__________________

For more on the long history of jihad on the Christian cross, see Raymond Ibrahim's recent book, Sword and Scimitar: Fourteen Centuries of War between Islam and the West.