Below is a nice visual, a valid checklist graphic I adapted from CatholicVote.org, which sums up the issues which should concern us as Orthodox Christians.

The only thing I really wish to add is an observation about President Obama. I think it is fair and accurate to characterize him as an 'antichrist' figure. But this day and age, there are lots of those. Of perhaps greater concern is what I suggested to someone several weeks ago: Barack Obama is not merely an 'antichrist', he is an 'anti-Constantine'.

By this I mean that Obama, in everything he has done and said, shows himself to be inclined in his heart towards Islam, desiring at the same time to advance the agenda of the secularists, atheists and neo-pagans, and in direct opposition to Christian orthodoxy. Obama is quite literally the spearpoint, the figurehead of the contemporary anti-Christian coalition, whose very purpose is not merely to defeat Christianity in the public arena, but to force, tempt, and coerce Christians to deny the Lord Jesus Christ and two-thousand years of Orthodox Faith.

This is why the HHS mandate exists, to try to break the will and 'spine' of Christian opposition, and force under threat of law Christian organizations and Christian men and women, businesses and families, to value this world, material well-being and universal health care over the Gospel and the Kingdom of Heaven. If re-elected, Obama's presidency could be looked back upon as the moment when the leader of a Western Christian nation, the global hyper power, the 'Rome' of its day, turned away from Christianity, much as Constantine turned away from paganism. Who knows what 'edicts' might issue forth from a second Obama term. I hope we don't find out.

Constantine saw the sign of the Cross with the words, "In this sign conquer." Obama looks at the Cross and hears a small voice whispering, "Conquer this sign."

A Mitt Romney presidency would buy us some time to get our own house in order, and to launch out into the highways and byways of the Americas with the Orthodox Gospel of Jesus Christ. There will likely be persecutions coming soon, but under Romney, we may hope to gain a little time to gird ourselves for the long haul. 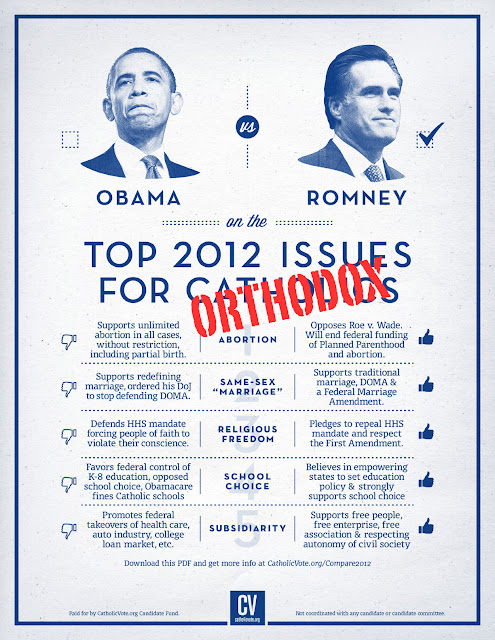