New Martyr Father Daniil Sysoev of Moscow
Confessor and Defender of Orthodoxy, and Apostle to the Muslims
†Nov. 19, 2009 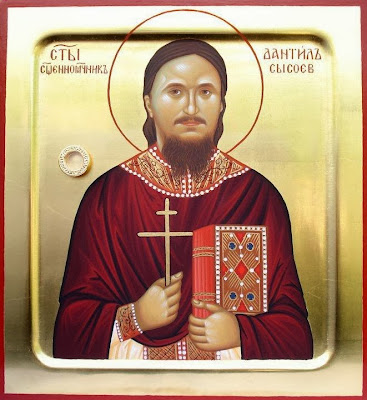 With the rising wave of genocidal persecution of Christians by Muslims, we can properly begin speaking of the 'New Martyrs of the 21st Century under the Sword of Islam'. One of the most important of these New Martyrs, if not the pre-eminent, is the righteous Priest-Martyr Fr. Daniil Sysoev of Moscow, who was killed by a Muslim in front of the altar at the church he founded.

Fr Daniil was not any ordinary casualty of Islam's renewed war on Christians in the early third millennium after Christ's First Coming in the Flesh. He was a towering figure in the Russian Orthodox Church, a theologian, writer, evangelist and missionary, who engaged in open debate with Muslims, and converted scores of them from Islam to the Orthodox Gospel, including a number of Wahhabi extremists.

His creative and energetic method of training and sending forth Orthodox street evangelists and missionaries should be a model for all Orthodox in how to spread the Gospel in our decaying age of the New Sodom and Gomorrah.

For his profound faith and tireless efforts, he has earned the titles of Confessor, Evangelist, Apostle to the Muslims, and Pillar of Orthodoxy in the 21st Century. That his zealous but loving and peaceful missionary work among Muslims enraged some of them to resort to murder in order to silence him, proves the strength and validity of his witness to Christ, and seals his life's work with the pure blood of holy martyrdom.

The purpose of this page is to provide a representative collection of essential resources on New Martyr Fr. Daniil Sysoev, to promote the veneration of Father Daniil as a Saint of the Church, and to inspire others to follow his example, take up their crosses, and labor for our Lord Jesus Christ.

'When they kill me, don't cry for me, but pray for me.' - Remembrances of Fr. Daniel Sysoev - "When we pray for the righteous, this prayer returns to us—our love returns to us. We have gained a martyr in Heaven, a confessor of Christ, and an intercessor before God for us sinners."

New Martyr Fr. Daniil Sysoev remembered with Paschal hymns in church where he was killed (with Videos) - "According to the now-annual tradition, Fr. Daniel’s memory was celebrated with a series of Divine services in the Church of St. Thomas and later at his grave... Notably, the panikhida was followed by the singing of the Paschal Stichera and the Paschal Troparion 'Christ is Risen!' which matched the feeling of triumph in Christ that pervaded the tiny church." 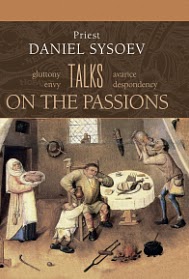 Can One Consider the Death of Fr. Daniel Sysoev to be a Martyrdom?
by Hieromonk Job Gumerov

Death is the last event in a person’s earthly life. For a missionary, death is the last homily, the last message preached, the last witness for Christ, Whom the missionary loved with complete readiness to sacrifice his or her life for the sake of the triumph of the Faith. Father Daniel Sysoev[1] had prepared himself for this sacrifice long before...  Read the full article. 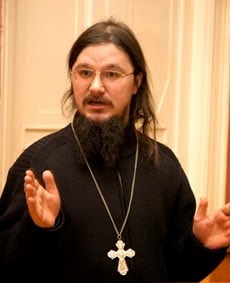 Serbian Conversations, Part 1 - An Interview with Fr. Daniil Sysoev and Dcn. Yuri Maximov
From the introduction by Dcn Yuri Maximov:


To shortly describe Fr. Daniel, he walked before God. And although that, in the firstplace, is the state of a soul completely directed to God, it even found its expression literally in his walk, not even mentioning his actions and words.

He walked with a light step, like a person who knows where he is going and why, one who is calm in the present and that does not worry about the future because he has entrusted all his cares to the Lord, Who is as close to him as a Loving Father. Read the full article and interview.

This interview concentrates on Orthodox missionary work, and is exceptionally challenging.

True Christianity is having pity for the perishing people. Fear to be punished by the Lord for burying one’s talent and desire to receive great reward in heaven-these are what must move a missionary. We should walk with God as the Lord said of Enoch, Enoch walked with God and…God took him (Gen. 5:24). Just that walking with God is the root of missions. In such a case you can see that both prayer and missions is, generally, the same thing.

By my own experience, I can say that when you preach you are on the very edge. The Lord reminds you that you are walking before Him and if you want to fall into sin, you immediately get hit in the head-the Lord does not allow you to fall. But even if you have fallen, the Lord will pick you up and not let you become trapped in sin because, truly, He will remind you through His Word which you are saying.

What does a missionary need to do first of all? The Lord commanded us, ye shall be witnesses unto me both in Jerusalem, and in all Judea, and in Samaria, and unto the uttermost part of the earth (Acts 1:8). Therefore, it is our business to be witnesses of Christ, which means to exclusively preach the Holy Gospel—not to preach Russianness, Serbness, Americanness, or whatever but to only preach the Lord Jesus Christ and Him crucified. Speaking in such a way you will be judging yourself... Read the full interview... 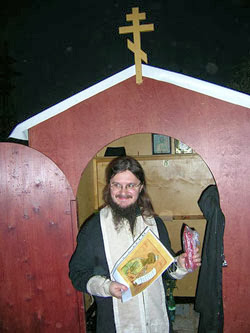 Orthodox Priest Murdered in Moscow for his anti-Muslim stance


(Pravda, Moscow, 11/20/2009) Orthodox Priest Daniil Sysoyev was assassinated in Moscow on the night of November 19. The crime was most likely committed for religious reasons. The priest might have fallen victim to Islamic radicals or sectarians, investigators say.

The unidentified assassin was wearing a doctor’s mask when he attacked the priest, Interfax reports. The criminal entered Holy Apostle Thomas Church in the south of Moscow on Thursday night, at about 10:40 p.m. It was a well-built tall man, eye-witnesses said...

The man rushed into the church and shouted: “Who is Sysoyev here?” The 35-year-old priest came forward, the attacker pulled out a gun with a silencer, and shot him in the neck and in the head. The assassin left the crime scene walking – he was not running... Read the full article. 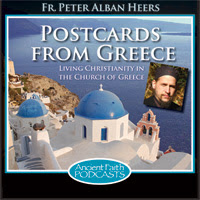 Orthodox Word #268, 'The Blood of the Martyrs is the Seed of the Church'
The Life and Martyric Death of the Righteous Missionary, Father Daniel Sysoev


You Wish to See Many Miracles? - You Should Become a Missionary or a Martyr!


Fr. Daniel's Autobiography and the Interview with Him on the Occasion of the Opening of the Missionary Centre