New Martyr Fr. Daniil Sysoev remembered with Paschal hymns in church where he was killed (with Videos)

"According to the now-annual tradition, Fr. Daniel’s memory was celebrated with a series of Divine services in the Church of St. Thomas and later at his grave... Notably, the panikhida was followed by the singing of the Paschal Stichera and the Paschal Troparion 'Christ is Risen!' which matched the feeling of triumph in Christ that pervaded the tiny church."


Fr. Daniil Sysoev remembered with Paschal hymns in church where he was killed


The memory of Fr. Daniel Sysoev was celebrated and prayers were offered for the repose of his soul yesterday and today in the Church of the Apostle Thomas in south Moscow, which Fr. Daniel founded himself. The ever-memorable Priest Daniel was shot in his church late in the evening of November 19, 2009, and died in the hospital early the next morning.

Fr. Daniel is remembered for his fervent missionary work through which he brought many former Muslims, pagans, atheists, Protestants, and others to the faith. He received many death threats for his work but he fearlessly continued in his service to the Lord until a Muslim from a radical Caucasus-based group shot him in his church. 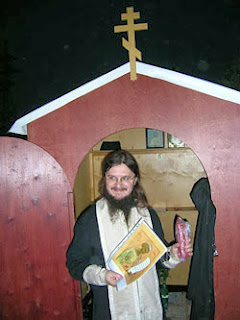 According to the now-annual tradition, Fr. Daniel’s memory was celebrated with a series of Divine services in the Church of St. Thomas and later at his grave. Vespers and Matins were celebrated yesterday evening at 5:00 followed by an abbreviated panikhida.

A full panikhida for the repose of Fr. Daniel’s soul was celebrated later at 11:00 with a packed church joining in the prayers. Among the celebrants were Fr. Daniel’s own father, Fr. Alexei Sysoev, Apostle Thomas rector Fr. Ioann Popadinets, and Hieromonk Athanasy (Deryugin) of Sretensky Monastery.

Notably, the panikhida was followed by the singing of the Paschal Stichera and the Paschal Troparion “Christ is Risen!” which matched the feeling of triumph in Christ that pervaded the tiny church.  View video here...


Those present who had known Fr. Daniel remembered him as a “fearless” missionary who would engage anyone in spiritual conversation about Jesus Christ and the Orthodox Church. He was full of spiritual energy and spiritual fire, some commented, never tiring of laboring in the vineyard of Christ.

Following the panikhida, the Midnight Office and Divine Liturgy were celebrated, which was new to this year’s schedule. Many people stayed for the Liturgy, communing of the precious Body and Blood of Christ, which Fr. Daniel encouraged Orthodox Christians to partake of more frequently.

Fr. Ioann offered a short homily at the end of the Divine Liturgy, encouraging all to follow the example of Fr. Daniel’s podvig, which shows how necessary it is to carry our cross and to show obedience. “Fr. Daniel carried his cross. Maybe it didn’t last long, but it was very bright,” he said.

The rector also noted that just the day before he had received a letter from a group of Romanians who loved the works of Fr. Daniel and were grateful for his continuing guidance for them in difficult moments in their lives, thus showing that veneration of Fr. Daniel is spreading throughout the Orthodox world.

Following the Divine Liturgy, the gathered faithful had the blessing of venerating the epitrachelion that Fr. Daniel was wearing when he was martyred.

A morning Liturgy was celebrated today as well, followed by a panikhda at Fr. Daniel’s grave at 2:00 PM at Moscow’s Kuntsevo Cemetery. In previous years, the people spontaneously began to sing the magnification to Fr. Daniel, manifesting their veneration of him as a true saint of Christ’s Church.

The video below shows the faithful singing the magnification to Fr. Daniel in 2015: