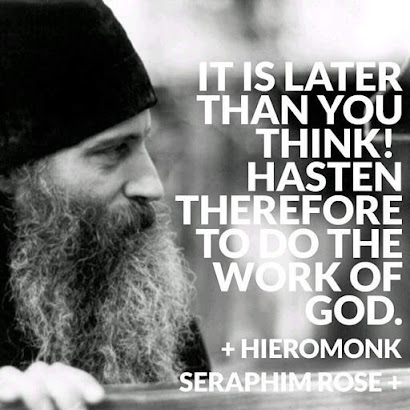 Recent years have seen a wealth of Blessed Father Seraphim's writings and talks uploaded to YouTube.

There are several recordings of Father Seraphim himself delivering some talks, but these are rare, and most of these YouTube videos feature someone reading the text. Some years back the trend was for such videos to use text-to-speech software to avoid the many hours of dictation involved, but such computer-generated recordings, with their soulless, robotic, AI voice, do violence to the text, and present Father Seraphim's teachings in the most ironic manner imaginable. They quickly become very difficult to listen to as a result.

The most recent offerings, several highlights of which are posted below, are well done readings by the dedicated hosts of these various YouTube channels, for whom, we can only assume, these labors are a holy podvig, and we give thanks for the efforts of the channels Orthodox Wisdom, Orthodox Reactionary, and others.
In addition, there are numerous videos which present excerpts of Father Seraphim's teachings in scrolling text against a photographic backdrop accompanied by low volume Greek or Russian Orthodox chant, as seen on the Gregory Decapolite and Nicodemos Hagiorite channels. These presentations have enormous impact on the soul, and somehow impart what Father Seraphim called "the savor of Orthodoxy" even in spite of this post-modern technology, format and platform.
We offer these links for your prayerful edification . . .
Orthodoxy and the Religion of the Future (12 videos)
Nihilism: The Root of the Revolution of the Modern Age (7 videos)
God's Revelation to the Human Heart (2 videos)
Orthodox Survival Course (21 videos)
Fr. Seraphim Rose - Articles & Teachings (5 videos) Three presentations, including:

• The Royal Path - True Orthodox in an Age of Apostasy

• Orthodoxy in the USA

• The Holy Fathers of Orthodox Spirituality