Although "churches were destroyed both by the opposition forces and the government army of President Bashar al-Assad... the report accuses only ISIS militants of desecration of Christian crosses... it is impossible to describe all the cases of attacks on Christian churches." 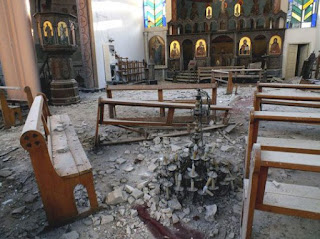 63 Christian churches have been destroyed during the years of war in Syria. The human rights organization, “Syrian Network for Human Rights” (SNHR), has published a report, entitled “Targeting Christian Places of Work in Syria”, reports Sedmitza.ru.

Authors of the report state that during the four years of war, churches were destroyed both by the opposition forces and the government army of President Bashar al-Assad. According to the 21-page report, directed against the legitimate regime, 14 churches were burned down by the opposition, 7 churches – by extremist groups (ISIS, Al-Nusra Front), while another 40 fell victims of the “ruthless” regime of B. al-Assad.

The report mentions one incident of deliberate desecration of a church in Kasab by the government troops. However, according to “World Watch Monitor”, islamists from “Al-Nusra” are responsible for that crime.

In spite of the consistent criticism of the Syrian government, SNHR admits that the majority of the churches “destroyed by the government forces” were situated on the territories controlled by the opposition.


SNHR also claims its experts verified every single photograph and video provided by local inhabitants and media. The group notes that it is impossible to describe all the cases of attacks on Christian churches.

“Christians and their places of worship are suffering as much as the whole of the Syrian nation. Missiles and bombs do not differentiate the religious from the non-religious,” the experts say.

However, the report accuses only ISIS militants of desecration of Christian crosses. They are accused of breaking down four crosses and converting two churches into military bases. Among the crimes committed by IS militants are ransacking of churches and destruction of icons.

SNHR is blaming the opposition, the extremist groups, and the government forces for committing military crimes by means of “intentional targeting” of churches and is adding that “this was not random destruction.”

The organization is also convinced that using churches as military bases is a violation of international law.