ISIS Leader: ‘Islam Is the Religion of War'

“O Muslims, Islam was never for a day the religion of peace. Islam is the religion of war... there is no might nor honor nor safety nor rights for you except in the shade of the Caliphate.” —Caliph Abu Bakr al-Baghdadi, Leader of the Islamic State 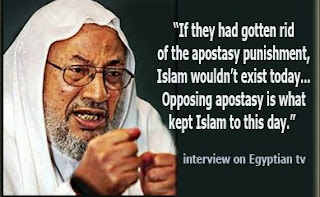 Those whose thinking is not clouded by political correctness or by the well-intentioned but misguided notion that avoiding direct criticism of Islam will help pacify the growing multitudes of militant Muslims, agree with al-Baghdadi: Islam is the religion of war.

In fact, Islam uses war-like threats — including the death penalty for apostasy — to keep its devotees in line. Yusuf al-Qaradawi, head of the Muslim Brotherhood and one of the most respected leaders of the Sunni world, recently admitted as much on Egyptian television saying, "If they [Muslims] had gotten rid of the punishment [often death] for apostasy, Islam would not exist today."


ISIS Leader: ‘Islam Is the Religion of War' 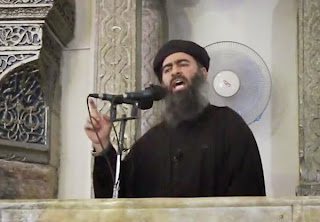 ISIS leader Abu Bakr al-Baghdadi has released a call to arms which asks Muslims everywhere to physically join ISIS in the area it now controls or simply take up the struggle against unbelievers wherever they are.

The title of the message “March Forth Whether Heavy or Light” comes from a verse in the Koran which calls on believers to “strive with your wealth and your lives in the cause of Allah.” In Baghdadi’s view that striving is ISIS’s war against unbelievers.

“O Muslims, Islam was never for a day the religion of peace. Islam is the religion of war,” al-Baghdadi says, according to an English language transcript of the speech promoted by ISIS-affiliated social media accounts. The transcript, which was posted online at Downrange, portrays Islam’s Muhammad as a warrior:

Where are you in relation to your Prophet (peace be upon him), whom you claim to emulate, and who spent his whole life (peace be upon him) as a mujāhid for the cause of Allah, fighting His enemies? His lateral incisor tooth was broken in battle, his forehead was wounded, two rings from his chainmail cut his cheeks, his helmet was broken on his head, and blood ran down his face.

Baghdadi frames the necessity of war against unbelievers as a religious duty but also as a necessity, saying, “the Jews, the Christians, and the rest of the disbelievers will not approve of you nor abandon waging war against you until you follow their religion and apostatize from yours.” The only place of safety in this global war between Muslims and unbelievers, Baghdadi says, is with ISIS:

The final pages of the letter are devoted to praise for the so-called “lions of the Caliphate” who are already fighting for ISIS around the world. In addition to numerous areas within Iraq and Syria, Baghdadi mentions fighters in Libya, Algeria, Tunisia, Yemen, and West Africa.

Last month, sources claimed Baghdadi had been seriously injured by an airstrike in Iraq sometime in March. Baghdadi was reportedly recovering but unable to maintain daily control of the terrorist group, however, those reports were not confirmed by U.S. officials. The audio message released Thursday is being viewed by some analysts as proof that Baghdadi (injured or not) is still leading the group….