• Latest measure is part of authorities’ “efforts to implement sharia law fully.”
• Sharia law rulings apply to all Muslims AND non-Muslims.
• The Sharia movement led to demolition of 20 Christian churches in 2012 alone. 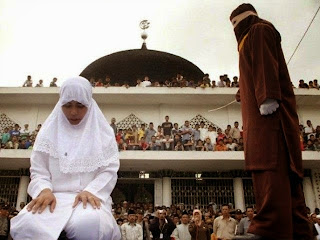 Proponents of stricter Islamic regulations in Indonesia have scored another victory with the passage of sharia measures mandating the separation of sexes in educational institutions and certain social situations.

On May 5, the North Aceh Parliament imposed a strict separation between the sexes in educational institutions, including middle and high schools, colleges and universities. The separation extends to both classroom and extracurricular activities on school property and will go into effect in a year.

The president of the North Aceh province, Fauzan Hamzah, said that the latest measure is part of authorities’ “efforts to implement sharia law fully.”

Drawing its inspiration directly from Islamic law, the new measures mandate the prohibition of mixed classes in the whole territory. The new qanun (local law) enacted Tuesday will require a substantial reorganization of educational practices in the region.


The Regency will continue to allow coed classes in elementary schools, but mandates absolute separation from seventh to twelfth grade. The new law states that universities are “strongly recommended” to study and take lessons in single-sex classes.

Among other provisions included within the same qanun is a ban against males and females traveling on the same motorbike, unless the two are husband and wife. An exception to the ban is made where the transport is carried out “on an emergency basis.”

“Unmarried people sitting closely together on a motorcycle is clearly against Islamic sharia as it could lead to sinful acts,” Hamzah said.

Fauzan Hamzah also explained that the rules serve to reduce the cases of adultery, which include “underground” prostitution and extra-marital relations. The school requirements also aim at strengthening young people’s attention to their studies. Students will attend sessions of Islamic prayer after school, while older students will carry out their devotions outside the school in the appropriate places of worship.

Another provision of the new measure forbids retailers from exposing mannequins in shop windows, or figures that evoke the animal world.

Indonesia is the world’s most populous Muslim nation, and often the scene of attacks or acts of intolerance against minorities, including Christians, Ahmadi Muslims, or people of other faiths.

The Aceh province, one of the earliest centers of Islam in Southeast Asia, has some of the strictest applications of Sharia law in the entire country, following a peace agreement between the central government and the Free Aceh Movement (GAM). The province has progressively adopted more extreme Islamic provisions in local law.

In April 2012, a regent in Aceh ordered the demolition of 20 places of Christian worship, which was interpreted by many as a signal of growing intolerance toward religious minorities. The order mandated the closure and destruction of 17 Protestant churches, two Catholic churches, and one place of worship belonging to followers of a local nondenominational faith.

The decree said that the churches lacked the necessary permits and ordered members of the different Christian congregations to tear down the churches by themselves, but added that if the church members refuse to comply, the administration itself would demolish the buildings.

In February 2014, the Aceh provincial administration approved the Qanun Jinayat, obliging every Muslim and non-Muslim in Aceh to follow sharia, the Islamic legal code.

“The qanun does indeed oblige everyone in Aceh to follow sharia without exception,” said councilor Abdulah Saleh, who was involved in the deliberation of the qanun in the council.

The decision to toughen the laws, regulations, norms, and behaviors has met with resistance from a large share of the local population.

Among the decisions challenged by the people of Aceh are prohibitions against women wearing jeans or tight skirts, dancing in public, and celebrating Valentine’s Day.

“There are some clauses banning women from dancing in front of men because doing so could incite negative perceptions and sometimes trigger sexual arousal,” said Hamzah.

On April 24, an unmarried couple was subjected to caning by order of the Bener Meriah Regency administration in Aceh after they were found guilty of fornication. The caning was carried out in public after Friday prayers at Al-Amin Pante Raya grand mosque in Bukit District, in accordance with the sharia law.