Japan: The Land Without Muslims

"In Japan, Islam is perceived as a strange religion, that any intelligent person should avoid."

[Note: Some readers, as usual, did not read the article before posting comments. The article does not claim that there exist no muslims at all in Japan. It merely states that the country makes it difficult for Islam to grow and spread due to the wise Japanese conclusion that Islam is not compatible with their culture] 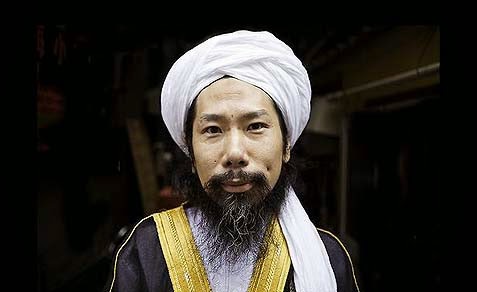 There are countries in the world, mainly in Europe, that are presently undergoing significant cultural transformations as a result of Muslim immigration. France, Germany, Belgium and Holland are interesting examples of cases where immigration from Muslim countries, together with the Muslims’ high fertility rate, effects every area of life.

It is interesting to know that there is a country in the world whose official and public approach to the Muslim matter is totally different. This country is Japan. This country keeps a very low profile on all levels regarding the Muslim matter: On the diplomatic level, senior political figures from Islamic countries almost never visit Japan, and Japanese leaders rarely visit Muslim countries. The relations with Muslim countries are based on concerns such as oil and gas, which Japan imports from some Muslim countries. The official policy of Japan is not to give citizenship to Muslims who come to Japan, and even permits for permanent residency are given sparingly to Muslims.

Japan forbids exhorting people to adopt the religion of Islam (Dawah), and any Muslim who actively encourages conversion to Islam is seen as proselytizing to a foreign and undesirable culture. Few academic institutions teach the Arabic language. It is very difficult to import books of the Qur’an to Japan, and Muslims who come to Japan, are usually employees of foreign companies. In Japan there are very few mosques. The official policy of the Japanese authorities is to make every effort not to allow entry to Muslims, even if they are physicians, engineers and managers sent by foreign companies that are active in the region. Japanese society expects Muslim men to pray at home.


Japanese companies seeking foreign workers specifically note that they are not interested in Muslim workers. And any Muslim who does manage to enter Japan will find it very difficult  to rent an apartment. Anywhere a Muslim lives, the neighbors become uneasy. Japan forbids the establishment of Islamic organizations, so setting up Islamic institutions such as mosques and schools is almost impossible. In Tokyo there is only one imam.

In contrast with what is happening in Europe, very few Japanese are drawn to Islam. If a Japanese woman marries a Muslim, she will be considered an outcast by her social and familial environment. There is no application of Shari’a law in Japan. There is some food in Japan that is halal, kosher according to Islamic law, but it is not easy to find it in the supermarket.

The Japanese approach to Muslims is also evidenced by the numbers: in Japan there are 127 million residents, but only ten thousand Muslims, less than one hundredth of a percent. The number of Japanese who have converted is thought to be few. In Japan there are a few tens of thousands of foreign workers who are Muslim, mainly from Pakistan, who have managed to enter Japan as workers with construction companies. However, because of the negative attitude towards Islam they keep a low profile.

There are several reasons for this situation:

First, the Japanese tend to lump all Muslims together as fundamentalists who are unwilling to give up their traditional point of view and adopt modern ways of thinking and behavior. In Japan, Islam is perceived as a strange religion, that any intelligent person should avoid.

Second, most Japanese have no religion, but behaviors connected with the Shinto religion along with elements of Buddhism are integrated into national customs . In Japan, religion is connected to the nationalist concept, and prejudices exist towards foreigners whether they are Chinese, Korean, Malaysian or Indonesian, and Westerners don’t escape this phenomenon either. There are those who call this a “developed sense of nationalism” and there are those who call this “racism”. It seems that neither of these is wrong.

And Third, the Japanese dismiss the concept of monotheism and faith in an abstract god,  because their world concept is apparently connected to the material, not to faith and emotions. It seems that they group Judaism together with Islam. Christianity exists in Japan and is not regarded negatively, apparently because the image of Jesus perceived in Japan is like the images of Buddha and Shinto.

The most interesting thing in Japan’s approach to Islam is the fact that the Japanese do not feel the need to apologize to Muslims for the negative way in which they relate to Islam. They make a clear distinction between their economic interest in resources of oil and gas from Muslim countries, which behooves Japan to maintain good relations with these countries on the one hand, and on the other hand, the Japanese nationalist viewpoints, which see Islam as something that is suitable for others, not for Japan, and therefore the Muslims must remain outside.

Because the Japanese have a gentle temperament, and project serenity and tranquility toward foreigners, foreigners tend to relate to the Japanese with politeness and respect. A Japanese diplomat would never raise his voice or speak rudely in the presence of foreigners, therefore foreigners relate to the Japanese with respect, despite their racism and discrimination against Muslims in the matter of immigration. A Japanese official who is presented with an embarrassing question regarding the way the Japanese relate to Muslims, will usually refrain from answering, because he knows that a truthful answer would arouse anger, and he is both unable and unwilling to give an answer that is not true. He will smile but not answer, and if pressed, he will ask for time so that his superiors can answer, while he knows that this answer will never come.

Japan manages to remain a country almost without a Muslim presence because Japan’s negative attitude toward Islam and Muslims pervades every level of the population, from the man in the street to organizations and companies to senior officialdom. In Japan, contrary to the situation in other countries, there are no “human rights” organizations to offer support to Muslims’ claims against the government’s position. In Japan no one illegally smuggles Muslims into the country to earn a few yen, and almost no one gives them the legal support they would  need in order to get permits for temporary or permanent residency or citizenship.

The fact that the public and the officials are united in their attitude against Muslim immigration has created a sort of iron wall around Japan that Muslims lack both the permission and the capability to overcome. This iron wall silences the world’s criticism of Japan in this matter, because the world understands that there is no point in criticizing the Japanese, since criticism will not convince them to open the gates of Japan to Muslim immigration.

Originally published at Middle East and Terrorism under the title, A Country without Muslims. Translated into English by Sally Zahav.
__________________________________
About the Author: Dr. Mordechai Kedar (Ph.D. Bar-Ilan U.) Served for 25 years in IDF Military Intelligence specializing in Arab political discourse, Arab mass media, Islamic groups and the Syrian domestic arena. A lecturer in Arabic at Bar-Ilan U., he is also an expert on Israeli Arabs.