Pressure continues to build for converting Hagia Sophia into a mosque in rapidly re-Islamizing Turkey. 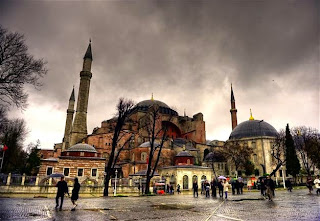 Hundreds of people demanded that the historic Istanbul Hagia Sophia museum be converted into a mosque during a rally in Istanbul on May 24.

People gathered outside Istanbul’s Hagia Sophia, in the historical Sultanahmet district, with some carrying signs that read: “Hagia Sophia needs to be reopened as a mosque,” and “Let our lives be sacrificed for Islam.”

The protest was led by many Turkish nongovernmental organizations, including the Humanitarian Relief Foundation (İHH).

Designed as a Christian basilica in the sixth century by Anthemios of Tralles and Isidorus of Miletus, Hagia Sophia is now a UNESCO World Heritage site.


Hagia Sophia remained a center of Orthodox Christianity until 1453, when the city was conquered by Ottoman Turks under Sultan Mehmed II, known as the Conqueror of Istanbul. After 916 years of service as a church, he ordered Hagia Sophia to become a “victory mosque,” symbolizing the Muslim conquest. The mosaics of the church were covered with plaster and were successfully restored in the 20th century.


Hagia Sophia was used as a mosque for 482 years. Following the Ottoman Empire’s collapse, it was converted into a museum by republican officials in 1935.

I'd say 10s of thousands looking at the video: