The Turkish Muslims are holding the shuttered Halki Seminary hostage in order to extort Greece to capitulate and enable the building of mosques in Athens and Thessaloniki. Allowing any mosques in either city would set a dire precedent, and would only bring strife, crime and open jihad to the already struggling Hellenic state.

For background on Turkey's efforts to establish a beachhead mosque in Greece, see Greek Parliament Surrenders to Islam, Orthodox Bishop and Citizens oppose mosque in Athens, as well as my posts here, here and here.

For more on the historic Halki Seminary, see here, here and here.

The Greek Orthodox were conquered and enslaved by Muslims once already. Let's hope and pray they hold firm against this form of stealth jihad. For resources on resisting mosque expansions, see my post, Challenging Mosques: Tools for Education and Legal Resistance.


Turkey offers to allow restoration of Halki Seminary in exchange for opening a Mosque in Thessaloniki
Pravoslavie — May 12, 2015 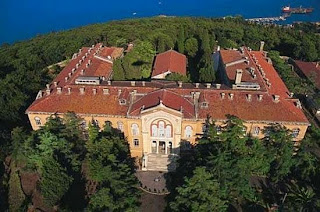 (Ankara, May 11, 2015) The Orthodox seminary on the island of Halki (Turkey) may be restored in exchange for opening of a mosque in Thessaloniki, Greece. This condition was laid down by the Turkish President Recep Tayyip Erdogan.

According to Blagovest-info, this information was spread by the Hürriyet Turkish newspaper with the reference to editor-in-chief of one history journal who had discussed the matter with Erdogan in person. The Turkish President said that he was ready to give his consent on reopening of the Orthodox seminary on Halki; however, he added, Greece was not intending to open mosques on its territory at all. Later Metin Kulunk, Member of the Erdogan’s Justice and Development Party, specified that the President meant the Fethiye Cami Mosque in Athens, and not a mosque in Thessaloniki.


Closure in 1971 of the Orthodox seminary on Halki (one of the Princes Islands in the Sea of Marmara near the coast of Istanbul) deprived the clergy of the Patriarchate of Constantinople of most of the theological preparation in Turkey. Lack of an Orthodox theological school on the territory of Turkey is worsening the position of the Patriarchate of Constantinople in general: according to the Turkish laws, only citizens of Turkey have a right to hold top posts in the Ecumenical Patriarchate, and now they can obtain a theological education only abroad.

The seminary on Halki was founded in 1844 by the Ecumenical Patriarch German IV. For the period between 1844 and 1971 the theological school issued 930 certificates of degrees. Although the majority of its students were members of the Patriarchate of Constantinople, there were also Orthodox Christians from other countries among them, as well as Catholics and Protestants who attended postgraduate courses.

In 1964 the authorities prohibited acceptance of foreign students to the seminary, and in 1971 the theological school was closed completely.