This is one of the key stories I missed during my sabbatical this past winter. Extremely important and quite an eye-opener. In places it is downright prophetic. A must read, including this concluding quote about the final phase of the plan:


"There is certainly no good reason to think Western leadership will stop the final phase from occurring: a unified, aggressive, expansionist, and eventually possibly even nuclear armed caliphate preparing to terrorize its neighbors on a grand scale — just like its historic predecessor did for centuries." 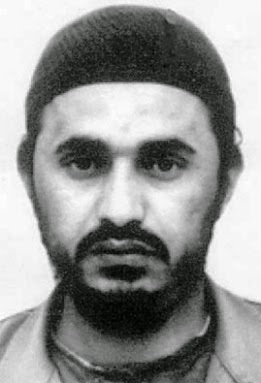 Although the birth of the Islamic state and the herald of the caliphate are often regarded as some of 2014’s “big shockers,” they were foretold in striking detail and with an accurate timeline by an al-Qaeda insider nearly one decade ago.

On August 12, 2005, Spiegel Online International published an article titled “The Future of Terrorism: What al-Qaeda Really Wants.”  Written by Yassin Musharbash, the article was essentially a review of a book written by Fouad Hussein, a Jordanian journalist with close access to al-Qaeda and its affiliates, including the late Abu Musab al-Zarqawi, who pioneered the videotaping of beheadings “to strike terror into the hearts” of infidels (Koran 3:151).

As Hussein explained in the introduction of his book Al Zarqawi: Al Qaeda’s Second Generation: “I interviewed a whole range of al-Qaeda members with different ideologies to get an idea of how the war between the terrorists and Washington would develop in the future.”

And in fact the book details the master plan of al-Qaeda—in its “second generation” manifestation known as the “Islamic State” which follows much of Zarqawi’s modus operandi—to resurrect a caliphate.  This plan is sufficiently outlandish that Yassin Musharbash, the author of the Spiegel article reviewing Hussein’s book, repeatedly casts doubt on its feasibility.  Thus al-Qaeda’s plan is “proof both of the terrorists’ blindness as well as their brutal single-mindedness”; there is “no way” al-Qaeda can follow the plan “step by step”; “the idea that al-Qaeda could set up a caliphate in the entire Islamic world is absurd”; and the following “scenario should be judged skeptically.”

Yet it is all the more remarkable that much of this plan—especially those phases dismissed as infeasible by Musharbash (four and five)—have come to pass.

In what follows, I reproduce the seven phases of al-Qaeda’s master plan as presented in Musharbash’s nearly ten-year-old article (in bullet points and italics, bold for emphasis), with my commentary interspersed for context.  Phases four and five are of particular importance as they describe the goals for recent times, much of which have come to fruition according to plan.

Much of this is accurate and makes sense.  Sadly, if any eyes were opened after the 9/11 attacks on American soil, they weren’t Western eyes—certainly not the eyes of Western leadership, mainstream media, and academia.

But to many Muslims, the strikes of 9/11 were inspiring and motivating, giving credence to Osama bin Laden’s characterization of America as a “paper tiger.”

A few years after the Islamic strikes of 9/11, Americans responded by electing a man with a Muslim name and heritage for president, even as he continuously empowers in a myriad of ways—including banning knowledge of Islam — the same ideology behind the strikes of 9/11.

Meanwhile, the average Muslim relearned the truths of their religion, namely that the “infidel” is an existential enemy and jihad against him is a duty, as al-Qaeda and others had successfully shown. 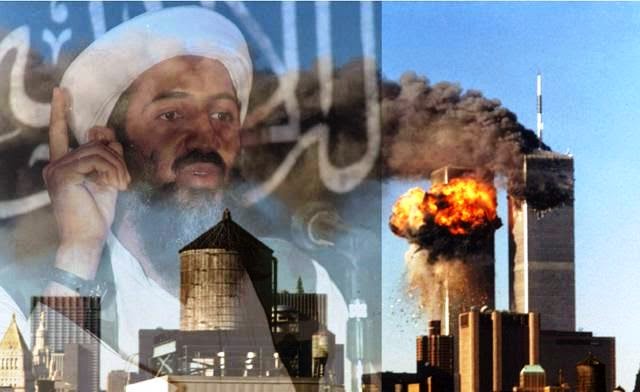 This too is accurate.   Among other things, the “Islamic community,” the umma, began to be more visible and vocal during this time frame, including through a rash of attacks and riots following any perceived “insult” to Islam, growing demands for appeasement, and accusations of “Islamophobia” against all and sundry.

If there weren’t any spectacular terror attacks on the level of 9/11, young Muslim men were quietly enlisting and training in the jihad—or in western parlance, “radicalizing.”  Al-Qaeda went from being an “organization” to a “movement”—international “radicalization.”  Most importantly, Iraq, as the world now knows, certainly did become the “center for all global operations” with an “army” of jihadis set up there.

Much of this third phase as described and transpired seems to have been an extension of phase two. In retrospect, there certainly appears to have been a focus on Syria, even if the jihad started there one year behind schedule (2011).  And many of the jihadis were “already prepared” and “some are in Iraq.”   None of this was a surprise, of course, as U.S. intelligence always indicated that if American forces withdrew from Iraq, the jihadis would take over.

This is immensely prophetic.  Recall that the timeline given (2010-2013) coincides remarkably well with the so-called “Arab Spring,” which culminated with Islamic terrorists and their allies taking over the leadership of several Arab countries formerly ruled by secularized autocrats: Egypt, the Muslim Brotherhood (which plays Dr. Jekyll to al-Qaeda’s Mr. Hyde); Libya, al-Qaeda/Islamic jihadis; ongoing Syria, al-Qaeda/Islamic jihadis (or their latest manifestation, the Islamic State, al-Qaeda’s “second generation”), etc.

It should be remembered that in each of these nations—Egypt, Libya, Syria—the Obama administration played a major role in empowering the jihadis, though in the name of “democracy.” 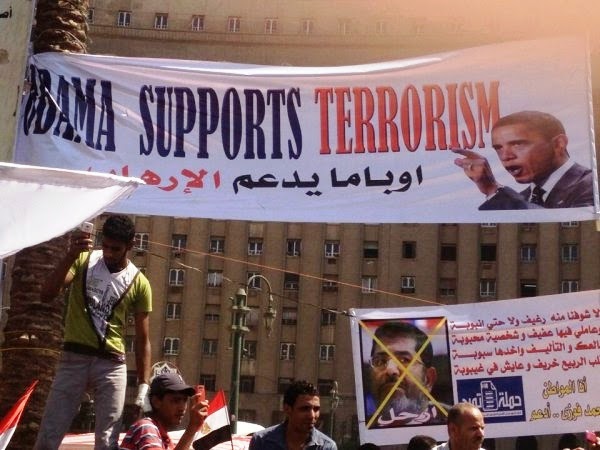 Again, right on time: the “Islamic State” declared itself the “caliphate” in 2014, with many Muslim organizations and persons around the world pledging their allegiance, if not imitating their slaughter, with inspired “lone wolves” already beheading “infidels” in Western nations.

And if the administration helped empower jihadis during the “Arab Spring” and in the name of “democracy” in Egypt, Libya, and Syria, it helped the creation of the Islamic State by withdrawing U.S. military forces that were keeping al-Qaeda at bay in Iraq.

“To begin withdrawing [military forces] before our commanders tell us we are ready would be dangerous for Iraq, for the region and for the United States.  It would mean surrendering the future of Iraq to Al Qaeda.  It would mean that we’d be risking mass killings on a horrific scale.  It would mean we allow the terrorists to establish a safe haven in Iraq to replace the one they lost in Afghanistan.  It would mean we’d be increasing the probability that American troops would have to return at some later date to confront an enemy that is even more dangerous.”

All of these predictions have proven remarkably prescient—not because Bush was a prophet but because U.S intelligence clearly understood the situation in Iraq, and briefed Obama on it just as it did Bush. Yet, in 2011, Obama declared the Iraq war a success and pulled out American troops, leaving the way wide open for the jihadi master plan of resurrecting the caliphate to unfold.

This needs clarification.  While many assume that the “fight between the believers and the non-believers” is between Muslims and non-Muslims, this is not always the case.

Soon after the announcement of the caliphate, the Islamic State made clear that it was in the phase of waging jihad on “apostates” and “hypocrites,” meaning all the “apostate” or “infidel” Arab leaders like Bashar al-Assad, as well as Muslim populations that are insufficiently “Islamic.”

It is for this reason that the new caliph took on the name of “Abu Bakr”—the name of the first historic caliph (632-634) whose caliphate was characterized by fighting and bringing back into the fold of Islam all those Arabs who broke away after Muhammad died.   Afterwards, when all the Arab tribes were unified under the banner of Islam, the great historic conquests, or jihads against neighboring “infidels,” took place. 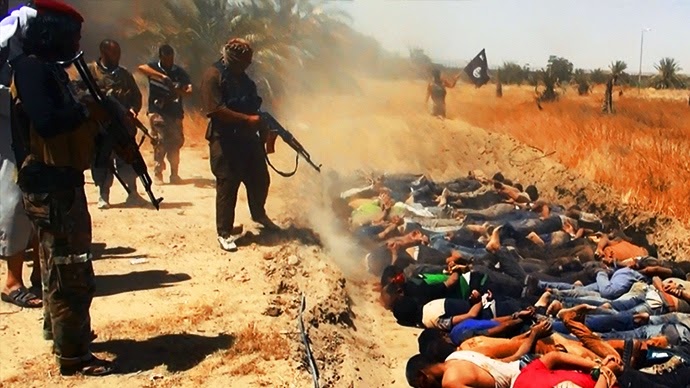 Phase seven remains to be seen, as it is has another five years to go.

As for the world being “so beaten down by the one-and-a-half billion Muslims,” actor Ben Affleck reflected this sentiment recently when he kept apologizing for Islam by saying Muslims “are a billion and a half.”

At any rate, considering that the preceding phases have all largely come to pass—with a passive West doing nothing to prevent them, that is, when not actively aiding them—there is certainly no good reason to think Western leadership will stop the final phase from occurring: a unified, aggressive, expansionist, and eventually possibly even nuclear armed caliphate preparing to terrorize its neighbors on a grand scale—just like its historic predecessor did for centuries.