End of Days: A Lamentation for Constantinople

The great clouds of Christian martyrs of the 20th and early 21st centuries join the heroic witnesses of the Imperial City of the Eastern Roman (Byzantine) Empire.

May 29 is the anniversary of the capture and desolation of the great Christian city of Constantinople by the forces of Islam in 1453.

We live in an age of global upheaval, of titanic forces and epochal change. After the bloody twentieth century, which saw 50 million or more Orthodox and Eastern Christians martyred for their faith in Jesus Christ, now we see a new wave of genocide committed by Muslims against Christians at the start of the twenty-first. A new harvest of holy martyrs joins the ranks of the saints in the heavens...

Many young people today may see Islam become the world’s largest religious group and dominant military-political force during their lifetime, and Europe may itself soon fall or capitulate to the pressures of millions of Muslim immigrants within their borders, and tens of millions more without.

The United States seems to have lost its way, conniving and plotting — and when the cost is not too high waging open warfare — against Orthodox Christian nations like Russia, Ukraine, Greece, Serbia and Romania. Christians here at home are now the targets of a perfect storm of neo-pagans, liberals, and the LGBT mob. We are mindful of the words of our Lord Jesus Christ:

"If the world hates you, you know that it hated Me before it hated you.
If I had not done among them the works which no one else did, they would have no sin; but now they have seen and also hated both Me and My Father.
But this happened that the word might be fulfilled which is written in their law, ‘They hated Me without a cause'."
— John 15:18-24-25

We live in dire times, not dissimilar to the gathering darkness which preceded the defeat of Constantinople in the fifteenth century. For the Christian citizens of the Great City, it must have felt like the ‘End of Days’.  It feels like that now, at times.

The Fall of Constantinople is a sign for us, that it can happen here, now. That our earthly cities can and will be swept away by the enemies of Christ. Yet we are called to stand firm in the Faith, knowing that Jesus Christ has already conquered, and that He will not forsake us.

In somber commemoration of this dark event, below are two accounts of the Muslim Turks’ crime against God and His people. May we be moved to deep repentance, faith and steadfast courage by the noble examples of our brothers and sisters, martyrs and confessors of so long ago. 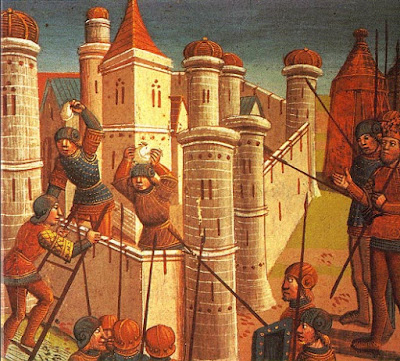 Several thousand of the survivors had taken refuge in the cathedral: nobles, servants, ordinary citizens, their wives and children, priests and nuns. They locked the huge doors, prayed, and waited. {Caliph} Mahomet {II} had given the troops free quarter. They raped, of course, the nuns being the first victims, and slaughtered.

At least four thousand were killed before Mahomet stopped the massacre at noon. He ordered a muezzin {one who issues the call to prayer} to climb into the pulpit of St. Sophia and dedicate the building to Allah. It has remained a mosque ever since.

Fifty thousand of the inhabitants, more than half the population, were rounded up and taken away as slaves. For months afterward, slaves were the cheapest commodity in the markets of Turkey.

Mahomet asked that the body of the dead emperor be brought to him. Some Turkish soldiers found it in a pile of corpses and recognized Constantine {XI} by the golden eagles embroidered on his boots. The sultan ordered his head to be cut off and placed between the horse's legs under the equestrian bronze statue of the emperor Justinian. The head was later embalmed and sent around the chief cities of the Ottoman empire for the delectation of the citizens.

Next, Mahomet ordered the Grand Duke Notaras, who had survived, be brought before him, asked him for the names and addresses of all the leading nobles, officials, and citizens, which Notaras gave him. He had them all arrested and decapitated. He sadistically bought from their owners {i.e., Muslim commanders} high-ranking prisoners who had been enslaved, for the pleasure of having them beheaded in front of him. 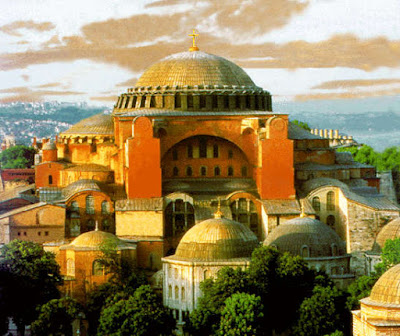 In the city everyone realized that the fateful moment had come. In the city, while the bells of the churches rang mournfully, citizens and soldiers joined a long procession behind the holy relics brought out of the churches. Singing hymns, men, women, children, soldiers, civilians, clergy, monks and nuns, knowing that they were going to die shortly, made peace with themselves, with God and with eternity.

When the procession ended the Emperor met with his commanders and the notables of the city. In a philosophical speech he told his subjects that the end of their time had come. In essence he told them that Man had to be ready to face death when he had to fight for his faith, for his country, for his family or for his sovereign. All four reasons were now present. Furthermore, his subjects, who were the descendants of Greeks and Romans, had to emulate their great ancestors. They had to fight and sacrifice themselves without fear. They had lived in a great city and they were now going to die defending it. As for himself, he was going to die fighting for his faith, for his city and for his people... He thanked all present for their contribution to the defense of the city and asked them to forgive him, if he had ever treated them without kindness.

Meanwhile the great church of Saint Sophia was crowded. Thousands of people were moving towards the church. Inside, Orthodox and Catholic priests were holding mass. People were singing hymns, others were openly crying, others were asking each other for forgiveness. Those who were not serving on the ramparts also went to the church, among them was seen, for a brief moment, the Emperor. People confessed and took communion. Then those who were going to fight rode or walked back to the ramparts.

From the great church the Emperor rode to the Palace at Blachernae. There he asked his household to forgive him. He bade the emotionally shattered men and women farewell, left his Palace and rode away, into the night, for a last inspection of the defense positions. Then he took his battle position.

The excesses which followed, during the early hours of the Ottoman victory, are described in detail by eyewitnesses... Bands of soldiers began now looting. Doors were broken, private homes were looted, their tenants were massacred. Shops in the city markets were looted. Monasteries and Convents were broken in. Their tenants were killed, nuns were raped, many, to avoid dishonor, killed themselves. Killing, raping, looting, burning, enslaving, went on and on... The troops had to satisfy themselves.

The great doors of Saint Sophia were forced open, and crowds of angry soldiers came in and fell upon the unfortunate worshippers. Pillaging and killing in the holy place went on for hours. Similar was the fate of worshippers in most churches in the city. Everything that could be taken from the splendid buildings was taken by the new masters of the Imperial capital. Icons were destroyed, precious manuscripts were lost forever. Thousands of civilians were enslaved, soldiers fought over young boys and young women. Death and enslavement did not distinguish among social classes. Nobles and peasants were treated with equal ruthlessness.

The Sultan entered the city in the afternoon of the first day of occupation. Constantinople was finally his and he intended to make it the capital of his mighty Empire. He toured the ruined city. He visited Saint Sophia which he ordered to be turned into a mosque. What he saw was desolation, destruction, death in the streets, ruins, desecrated churches…

by Dionysios Hatzopoulos
Professor of Classical and Byzantine Studies, and Chairman of Hellenic Studies Center at Dawson College, Montreal, and Lecturer at the Department of History at Universite de Montreal, Quebec, Canada.