“Peace be upon all auspicious prophets of God, from Adam, Noah and Abraham to Moses, Jesus and Mohammed Mustafa...” —Prayer read at Westminster Abbey, England


A curious, and at times troubling analysis (as when he says "there's no real problem" with thanking Allah, the © name of the false, Islamic deity), by the Anglican archbishop, but thankfully, he strongly makes several critical points in his conclusion.

Of all the disturbing news about Islam in the UK, because of its theological nature, this one may be Britain's virtual death knell. 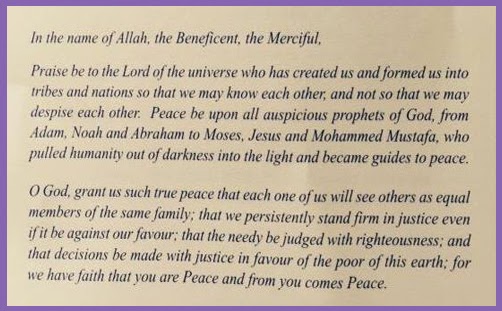 That wasn’t quite how the prayer was rendered in Westminster Abbey during the service of commemoration and thanksgiving marking the centenary of the Gallipoli campaign – a bloody and disease-ridden battle of attrition during the First World War, which helped to forge the national identities of both Australia and New Zealand (not to mention the rise of Mustafa Kemal [aka Atatürk] and the establishment of the modern state of Turkey). In the presence of the Queen, the great and the good gave thanks to God for the ‘Anzac spirit‘ of ‘endurance, courage, ingenuity, good humour, larrikinism, and mateship’, with which the British feel undoubted kinship, and for the sacrifice of which by so many we remain eternally grateful.

God was thanked in the Abbey, and so was Allah. There’s no real problem with that, for Allah is simply Arabic for ‘The God’, and the term used by many millions of Arabic Christians throughout the centuries in reference to ‘The God that made the world and all things therein, he, being Lord of heaven and earth‘ (Acts 17:24). We may quibble over conflicting doctrines and cavil over contradictory revelations, but if St Paul can address a meeting of the Areopagus and exhort the incipient virtue in the ignorance of Athenian religiosity, whether you call the Creator of the universe ‘God’, ‘Jehovah’, ‘YHWH’, ‘I Am’ or ‘Allah’, you are acknowledging (in mirrors darkly) the One who does not live in temples built by human hands, and the One who gives everyone life and breath and everything else.

But this is the prayer the congregation heard: 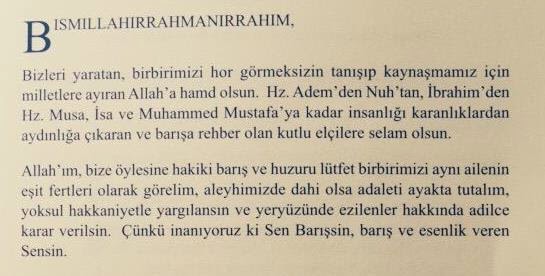 It’s hard to be offended by something one cannot understand. And there can be no offence at all caused by any exhortation of God in Turkish, for God is not an Englishman. But in the translated succession of prophets is a comprehensible assertion of Islamic theology which errs (to put it mildly), and may cause some theological disquiet (putting it milder still). The succession of prophets “from Adam, Noah and Abraham to Moses, Jesus and Mohammed Mustafa” is chronological: the first four are common to the prophetology of Judaism, Christianity and Islam; Jesus as a prophet is common to Christianity and Islam (with disparity over priest and king); and Mohammed is a prophet of Islam alone (indeed, ‘The Prophet’). ‘Mustafa’ is an epithet ascribed by Muslims to Mohammed: it means ‘The Chosen One’ (and note that the Abbey did not offer a translation of this term, which, rendered in English during a Christian service, would have caused undoubted offence).

For Christians, of course, it is Jesus who is the Anointed of God; the Christ; the Messiah; the Chosen One. ‘Behold my servant, whom I have chosen; my beloved, in whom my soul is well pleased: I will put my spirit upon him, and he shall shew judgment to the Gentiles‘ (Isa 42:1 cf Mt 12:18). When He was baptised, ‘..the Holy Ghost descended in a bodily shape like a dove upon him, and a voice came from heaven, which said, Thou art my beloved Son; in thee I am well pleased‘ (Lk 3:22).

[By way of reminder, Jesus Christ is not merely the "Anointed of God," but the very Son of God Himself, the Word (Logos) of God and Second Person of the Holy Trinity, Who at a specific time and place in human history became incarnate, and was crucified and buried, and Who rose from the dead on the third day, and ascended to the right hand the Father... and Whose Kingdom shall have no end. The Virgin Mary is not merely Christokos, she is Theotokos!]


In Islamic theology, Mohammed was ‘The Prophet’ who came to fulfil and complete the partial revelations of all preceding prophets. Muslims believe that his coming was prophesied by Jesus: ‘But when the Comforter is come, whom I will send unto you from the Father, even the Spirit of truth, which proceedeth from the Father..‘ (Jn 15:26). The ‘Comforter’ or ‘Advocate’ (NIV) whom Christians believe to be the Holy Spirit is, for Muslims, Mohammed. So when he is declared in Westminster Abbey to be ‘The Chosen One’, it is not simply a benign multifaith expression of ecumenical respect in a commemorative service of reconciliation: it is a dogmatic affirmation of a perfected prophethood to which Jesus is subordinate, and His divinity thereby denied.

It may not be very PC or neighbourly or conducive to interfaith relations to say it, but Mohammed was a false prophet (Jer 14:14-16; 1Jn 4:1; Acts 4:12; 2Cor 11:3f). By rejecting the crucifixion and denying the resurrection of Christ (who is not the ‘Chosen One’), Islam espouses ‘another Jesus’, ‘another spirit’ and ‘another gospel’. They are and ought to remain free to proclaim their religiosity, however false and erroneous it may be. But not, please God, in The Collegiate Church of St Peter (aka Westminster Abbey), which is a Royal Peculiar of the Supreme Governor.