So called "art" which presents offensive depictions of Christ and His Most Pure Mother, the Holy Theotokos (Greek: "Birthgiver of God"), is part of the Western cultural persecution of Christianity, one waged "more by sneer than by spear," as I heard Fr. Thomas Hopko (of beloved memory) put it in a talk. 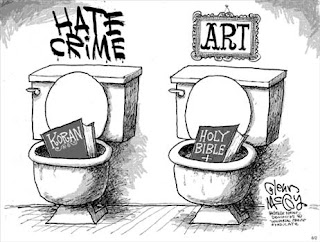 The hypocrisy is stark and absolute: “Under Times standards, we do not normally publish images or other material deliberately intended to offend religious sensibilities” — unless it offends a group that is not committing mass murder and threatening more over such images. This is, as I wrote yesterday, still more mainstream media canonization of the assassin’ veto. The mainstream media is signaling that terrorism works: threaten to kill us, and we will do what you want. That will only bring more terrorism.

The New York Times’ hypocrisy regarding displays of “offensive” religious imagery runs unabated, as shown in a Scott Reyburn article in Friday’s Arts section on the sale of Chris Ofili’s controversial painting “The Holy Virgin Mary,” which shows the Virgin Mary clotted with elephant dung against a porn-collage background — and accompanied by a photograph of the offensive work.

Yet when the paper refused to reprint a cartoon of Muhammad that appeared in the Paris satirical magazine Charlie Hebdo that resulted in the January 2015 massacre of 12 magazine staffers, it offered this smug, cowardly justification:

Under Times standards, we do not normally publish images or other material deliberately intended to offend religious sensibilities. After careful consideration, Times editors decided that describing the cartoons in question would give readers sufficient information to understand today’s story.

Not fear of violent reprisal, but fear of “causing offense.” So why does Ofili’s dung-clotted Virgin Mary get a pass?…
_____

Because no one will kill you over it.