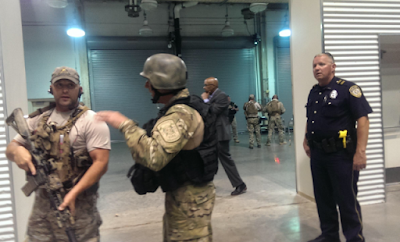 GARLAND, Texas — Shots rang out this evening at the Curtis Culwell Center in Garland, Texas during the Mohammed Art Exhibit and Contest. A law enforcement officer was shot and both suspects have been killed. Officers on the scene said that it is possible that explosives are in the area.
Attendees were immediately forced into lockdown by police, including three Breitbart News reporters. Sources say event organizer Pamela Geller and keynote speaker Geert Wilders, a Dutch politician, are safe. Breitbart Texas was conducting a live video interview with Geller at the moment of the attack.

UPDATE, 7:02 AM:
ABC News reports one of the shooters has been identified as Elton Simpson, who an FBI official stated had been investigated for terrorism in the past. Court records from 2011 show Simpson identified as an “American Muslim.”

UPDATE, 4:28 AM:
UPDATE ON POLICE INCIDENT 4:28AM:Most of the perimeter has been released. Bomb Squad and Garland Fire Rescue has cleared the location and the FBI is currently investigating the incident.

A vehicle was detonated by the Bomb Squad.

Naaman Forest Blvd is still closed. It's unknown at this time when the scene will be cleared.

The next press release is scheduled at the Garland Police Department at 10AM.
Posted by Rowlett/Sachse Scanner on Monday, May 4, 2015

UPDATE, 3:11 AM: Police are still investigating the scene of the shooting.

UPDATE, 1:52 AM: Geert Wilders thanks security for thwarting the attack. 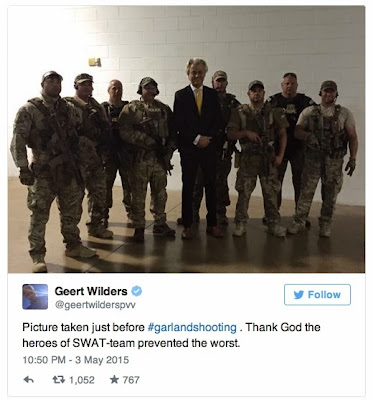