Pakistani Christian leader receives threats from Muslims, told to ‘stop building churches or we will kill you'

Muslims warn, "This is an Islamic nation. We cannot allow church building. Either you convert to Islam or you leave this country! Stop building churches or you’ll pay the consequences!"


Pakistani Christian leader receives threats from Muslims, told to ‘stop building churches or we will kill you'

by Shafique Khokhar, AsiaNews, May 11, 2015
via Jihad Watch and The Religion of Peace 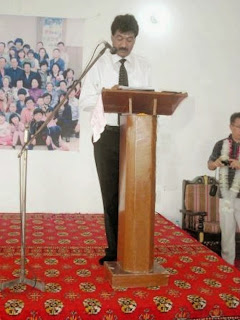 Lahore (AsiaNews) – For the past three months, Javed David, a Christian leader in Lahore, has been receiving death threats from a group of unidentified people because of his involvement in the construction of several churches in the area.

Three of his associates – John Akram, Ata-ur-Rehman and Saman Joy Alexander – have also been threatened. David is president of a Christian association, ‘Hope for the Light Ministries’.

The latest incident occurred on 4 April, the day before Easter, but the Christian leader spoke to AsiaNews about only today.

“I had been to church in Sheikhupura to attend a meeting with colleagues,” he said. “It was 8 o’clock in the evening when we left to return to Lahore. We were about to reach the main road when a motorbike drove up and blocked the way. Maybe they were following us. The two bikers were wearing a helmet. One of them came up to my window and spoke to me. ‘We know what you are doing here,’ he said. ‘Stop building churches. Convert to Islam, which is the true religion. Otherwise we will make a horrible example of you.”


A similar incident occurred on 22 February, after he visited another church under construction. “On that occasion too, I was going home,” he noted, “when a motorcycle stopped in front of me. The driver knocked on the window and threw in a piece of paper. I did not open it before I got home. It said, ‘This is an Islamic nation. We cannot allow church building. Either you convert to Islam or you leave this country! Stop building churches or you’ll pay the consequences!”

“Right now we were shocked and frightened,” Ata-ur-Rehman Saman said. “Previously, when we bought land to build the church in Sheikhupura, we met resistance from some members of the local Muslim community, but then it all worked out. The head of the local madrassa laid the first brick. Both communities live in peace there, although we have seen rising religious intolerance.”

“My family and I are scared and worried because I continue to receive threats,” Javed David said. “Where can we go to enjoy religious freedom? This is our country; we have lived here for generations.”

“After the tragedy in Youhanabad, circumstances have changed and now there is more fear,” he added. “Still, I dedicated my life to Christ and I shall continue to serve His people, no matter what happens.”