VIDEO: Raymond Ibrahim — The ongoing war between Islam and Europe

In the following video, Hanne Nabintu, historian of religions, interviews Raymond Ibrahim on the history of Islam and the West.  Topics include the original (but forgotten) Arab conquests, the (demonized) Crusades, and why the modern West’s notion of “history” is immensely skewed. 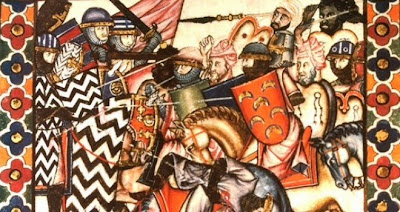 Interview with scholar Raymond Ibrahim on the Middle East and vital facts of history that we often hear little about in the media today. We often forget that during the early Islamic conquest a high number of Christian nations in the Middle East were taken over by Islam. Egypt, Syria, Algeria, Marocco - these were Christian lands at the time.

Europe itself was under siege for several hundred years, - only Scandinavia, Germany and the British Isles were exempt from the Muslim effort to take Europe. We forget that the Crusades were originally a European reaction to the horrors that was done to Christians, both pilgrims and the indigenous Christians in the Middle East as a result of the Muslim Conquests.

Scroll down for video...


We tend to hear much about that which was not so good about the Crusades, but little about the Islamic horrors that led to the European Crusader reaction in order to save the lives of Christians in the Middle East. We are forgetting history as a result of the politically correct, radical leftwing and liberal teaching that permeates the curriculum and teachings in schools today: History is twisted, vital facts not presented and the valuable European contribution to civilization demeaned.