Update on this story. which gives some historical background. 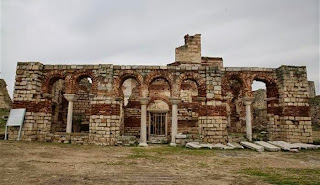 
Foundations General Director Adnan Ertem argues that the building was a “sanctuary that was consecrated as a mosque….  It is a foundation that can be put into service in line with its foundational charter. Thus its function will be preserved.”

Enez’s Hagia Sophia, the name of the ancient church, is located inside the city of Ainos, along the border with Greece and stationed atop a hill, visible to all.

Another several-hundred-year-old church, Hagia Sophia in Trabzon along the Black Sea, although a museum for many years, was reopened in July 2013 as a mosque.

For many Muslims, the ultimate Islamic triumph will come when the primary Hagia Sophia in Istanbul (Constantinople), which is currently a museum, is transformed into a mosque—as Turkish leaders recently threatened when Pope Francis acknowledged the Armenian Genocide.