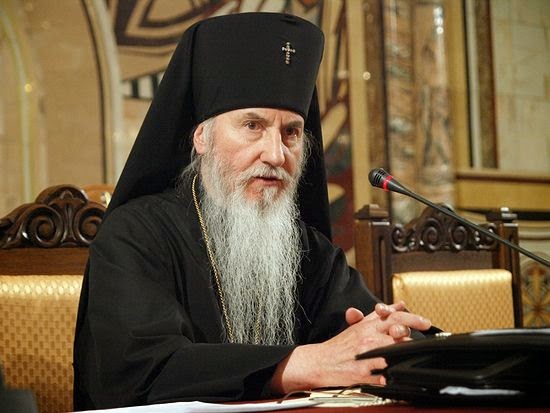 Islam is at its core anti-human... Reading the Quran, you will see that all of this [extremism] lies at the foundation of Islam. One must look truth in the eye: this is all anti-human, it is directed against humanity...

Yes, there were times when Muslims tried to live in peace with their neighbors, they even acknowledged that we Christians are people, too. But for many, those times have passed, and now they reveal who they really are.  — Archbishop Mark (Arndt) of Berlin (Full citation below.)


How refreshing and encouraging to read clear, direct truth from an Orthodox Christian hierarch, in which he does not offer such false platitudes as the following:


“Christians and Muslims are two lungs of one Eastern body,” the Greek Orthodox Patriarch said, “and we condemn anything that harms the reputation of the forgiving Islamic religion, with which we have experienced the peace and fraternity.” (Daily Star)

Fight against those who believe not in Allah, nor in the Last Day, nor forbid that which has been forbidden by Allah and His Messenger and those who acknowledge not the religion of truth [i.e. Islam] among the people of the Book [Jews and Christians], until they pay the jizya with willing submission, and feel themselves subdued. (Quran 9:29)

“I have been commanded to fight people until they testify that there is no god but Allah and that Muhammad is the Messenger of Allah, and perform the prayer, and pay zakat. If they say it, they have saved their blood and possessions from me, except for the rights of Islam over them. And their final reckoning is with Allah.” (Saying of Muhammad, from authorized Hadith on jihad from Sahih Bukhari)

Numerous examples of false statements about Islam can be cited from many Orthodox hierarchs, including from Ecumenical Patriarch Bartholomew, who has written of a “dialogue of loving truth” with Islam, of Orthodoxy having for centuries “coexisted peacefully” with Islam, and of an “interfaith commitment... still felt and lived by Greeks [and] Turks.” ( Ecumenical Patriarch Bartholomew, Encountering the Mystery, Doubleday, 2008, pp xxxvii, 196, 174.)

Yet he writes this in spite of fourteen centuries of Islamic jihad against Christians, the enslavement of the Greek Orthodox after the conquering of Constantinople in 1453, and the blood-stained parade of neo-martyrs from the 15th to 19th centuries (including dozens of Ecumenical Patriarchs); in spite of the Turkish Muslim genocide against Orthodox Christians from 1894 to 1922, in which over 4 million Greeks, Armenians and others were killed; in spite of the Turkish Muslim pogroms against the Greek Orthodox (e.g., Istanbul, 1955) up through the present day, which includes the conversion of the great Hagia Sophia Church of Constantinople into a mosque, together with numerous other 'Hagia Sophia' churches throughout Turkey.

Bartholomew and other bishops who seek to cover over the anti-human bloodlust inherent in Islam do not help, they merely confuse and demoralize the faithful, who see for themselves what Islam is all about. The faithful need to be strengthened in their faith against all the apocalyptic attacks being waged against them from every side, including by adherents of the false religion of Muhammad.

Even Russian Orthodox hierarchs — so staunch and upright in so many other ways — are prone to making the most patronizing pronouncements about Islam. For example, Patriarch Kirill of Moscow recently said that extremism is not taught by Islam, but is fueled by a "lack of religious awareness:"

“The religious feelings of people, in particular, Muslims, are now exploited to cause these people to commit radical actions. Many people indeed genuinely take the horrible path of terrorism, thinking that by doing so they serve God..." However, Islam does not teach anything of the sort and this interpretation is caused by “a complete lack of religious awareness.” (Source.)

With so many gross falsehoods about Islam's supposedly peaceful nature being put into the air by Orthodox bishops, pastors and teachers, it is, therefore, all the more necessary to share as widely as possible the correct teaching on Islam, especially when it is put forth in such a forthright manner by a highly respected Orthodox hierarch like Archbishop Mark of Berlin.

Even more significant is that His Eminence's remarks were made in the context of a larger discussion on contemporary monasticism and the difficulty modern Christians have in forcing themselves in prayer, repentance and praxis. While many of our hierarchs have great difficulty forcing themselves to admit or teach the truth about Islam, Archbishop Mark speaks with authentic apostolic fervor, and his words resonate with those of modern new-martyrs such as Fr Daniil Sysoev of Moscow and confessors such as Fr Daniel Byantoro of Indonesia.

- How should Christians react to the terrible epidemic of the genocide of our brothers and sisters in Christ in Syria, Metochia, Kosovo and Serbia? Is this active Islamization or the actions of radical extremists, bandits who only assume the mantle of Islam? His Holiness Patriarch Kirill of Moscow and All Russia, during a Liturgy in Christ the Savior Cathedral in Moscow read to his Russian flock the epistle of the Antiochian Patriarch, in which he painfully called to the whole world for help, stressing that the situation is at such a horrifying stage that help is needed not only through prayers to God, but in action. But in Christian society the reigning opinion is that we can help exclusively by prayer.

- I reject the expression “help exclusively by prayer.” That we Christians are only capable of prayer is a false notion. Of course, prayer is our foundation and greatest strength. But if we think that all we can do is pray, we will go astray. Yes, we must pray, but we must also understand that people are often forced by circumstances to soften one’s language. If the Antiochian Patriarch says this, he bases it on the experience of his own nation, where Christians and Muslims always lived in peace. I think that it is incorrect to say that there are only extremists at work there.

Reading the Quran, you will see that all of this lies at the foundation of Islam. Extremism exists, of course. Other Eastern hierarchs openly state that they have known about this particular aspect of Islam all their lives. I often serve in Jerusalem. There, for instance, on the feast of the Holy Trinity, right next to the church a muezzin cries from his tower that they believe in the One God Who has no children, no Son and Holy Spirit, etc. He has no compunction to do so, though these people are not really extremists. What is this? Open, unabashed propaganda against Christianity! They know full well what they do, spewing these slogans during the main Christian holiday of the Pentecost, the celebration of the birth of the Church Herself.

Islam is at its core anti-human. Look at Ramadan—this is the mortification of the human being, of the human body. I saw how people were taken to hospitals during their observance of Ramadan. All day they eat nothing, drink nothing even during baking heat, and at night the cram there stomachs to the point of losing consciousness—it is madness! One must look truth in the eye: this is all anti-human, it is directed against humanity.

Yes, there were times when Muslims tried to live in peace with their neighbors, they even acknowledged that we Christians are people, too. But for many, those times have passed, and now they reveal who they really are.

- In other words, when some say that what is happening in Syria and other fundamentally Christian nations, it is only political, not a religious war against Christianity, it is untrue? Regardless, can we say that the Christians who are murdered for their faith today are martyrs.

- There is an intentional war being waged against Christians. Kosovo was the first in the list of such genocide from Christian territory. Then Chechnya. Understand what happened, a Christian nation was simply given away to the Muslims. The destruction of churches continues, tortures, wild fanaticism, murder. Kosovo, Chechnya, Syria, Egypt…

- The next goal for these people, whether they are extremists or not, is to declare Russia Muslim. What are we to do, strengthen our prayers?

- The most important thing is to be real Christians. This means constant participation in the Mysteries of the Church. If the Lord grants someone the crown of martyrdom, it means the person earned it and must accept it with dignity.