Horror as Turkish is made an ‘official EU language’

. . . before ANY voters support membership! 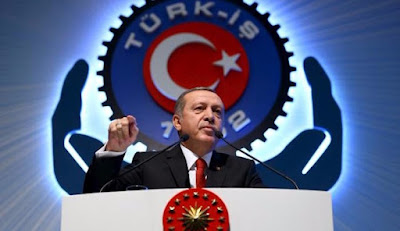 This essentially guarantees that Turkey will be admitted into the European Union, which will mean that it will — because of its population — immediately become its dominant member, and be able to set EU policy. It will enable millions of Muslims, including jihad terrorists, to enter Germany, France, Britain and other European countries with no checks. It will, in other words, hasten the conquest and Islamization of Europe.

“Horror as Turkish is made an ‘official EU language’ before ANY voters support membership,”

TURKISH is to become an official language of the European Union, as the Islamic nation draws closer to being admitted as a fully-fledged EU member.

Not a single voter from the EU’s 28 member states – which have a total population of 508 million – has yet to vote in favour of Turkish membership.

But MEPs voted 375 – 133 to back the initiative by President of Cyprus Nicos Anastasiades, who asked the Dutch EU Presidency to add Turkish to the bloc’s 24 official languages in order to boost attempts to reach a reunification agreement on the Mediterranean island.

The move, expected to add £25m to the EU’s annual budget, has infuriated critics who last night said it was further proof that Turkey’s accession to the EU was “all but guaranteed”….