UPDATE: I'm deeply humbled to discover that Mr. Steyn himself picked up my post from Jihad Watch (where it was originally posted) and quoted it at his site. I strongly recommend reading my post below, watching the 6 minute video clip to see Mr. Steyn's strong and honorable example of righteous anger on behalf of raped and victimized women and children in Europe. Then click over to Mark Steyn's follow-up post where he provides the much needed service of fact checking for naysayers who are trying to claim that Muslim migrant sexual assaults of native Europeans is simply not happening. Shame on them for defending Islam, and bravo to Mark Steyn for defending the weak and vulnerable. 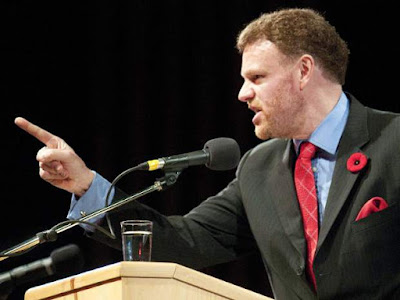 I am ashamed to admit I didn't grasp the importance of the Munk Debate held last week in Toronto. But now I do, and I feel it is my duty to share this particular exchange so as to try to win some hearts and minds over to the side of sanity, prudence and caution when it comes to the question of mass Muslim refugee resettlement and immigration to Europe and North America.

Many Christians may feel inclined to be in favor of the motion. Coptic Bishop Angaelos of England certainly does. But in spite of whatever sentimental feelings we may harbor in reaction to the genuine suffering of millions of displaced persons in the Middle East (the direct result of United States policy in toppling legitimate governments and aiding Muslim extremist groups), it is important for us to consider the disastrous effects of mass resettlement of Muslim refugees in Western societies. It sounds altruistic, until it is your daughter or niece or nephew who has been gang raped by a mob of Muslim men or blown apart by Muslim terrorists. Just check the headlines from the last several months to see the extent of the Muslim migrant crisis.

Or consider this: even in Jesus' parable of the Good Samaritan, the kindly Samaritan does not take the injured wayfarer into his own home, but treats his wounds and sets him up in an inn, providing money to the innkeeper for his care. Likewise, the solution Western governments should provide is not mass immigration but the creation of refugee safe zones with proper accommodations, food, lodging, medicine, etc.


The Munk tradition is to poll the audience before and again after the debate. The first poll was 77% in favor of the motion, 23% opposed. After the debate, the pro side dropped to 55% and the con leapt up to 45%, a huge, 22% shift, revealing how a dynamic elaboration of the facts of the case can persuade people of the dangers of welcoming mass numbers from an alien culture into Western societies.

Barbara Kay writing at the National Post described what she considered to be the point at which the opinion of the room began to shift towards the "con" position:


To some audience members... Steyn dwelt excessively on the sexual crimes we’ve all read about in Cologne, Hamburg, Malmö and elsewhere. So it apparently seemed to Arbour and Schama, because they mocked Steyn for it in their rebuttals. Arbour sneered at both Steyn and Farage as “newborn feminists” (she got a laugh), while Schama disgraced himself with “I’m just struck by how obsessed with sex these two guys are, actually. It’s a bit sad, really.” (That got a very big laugh.) I took one look at Steyn’s glowering face after that remark — Schama will regret having said it to his dying day, I know it — and I kind of felt sorry for those two liberals, because I knew what was coming.

Steyn slowly rose and riposted, in a tone of withering contempt, “I wasn’t going to do funny stuff. I was going to be deadly serious. (But) I’m slightly amazed at Simon’s ability to get big laughs on gang rape.” Vigorous applause. He went on, “Mme Arbour scoffs at the ‘newfound feminists.’ I’m not much of a feminist, but I draw the line at a three year old … and a seven year old getting raped.” Vigorous applause.

I think that was the moment those of the audience who did change their minds got it...


Watch the video immediately below to get the full impact of Steyn's response. The expressions of the audience behind him reveal their shocked reaction to his thundering recitation of mass rapes of innocent European children by Muslim migrant savages in public parks, swimming pools, and even in a city hall.

Virginia Hale at Breitbart News presents a fine synopsis of the evening, highlighting this archetypal example of the blindness of the EU's immigration policy, cited by Steyn:

Revealing the horrifying realities on the ground in Europe, as a result of the presence of more than a million refugees, Steyn described how “a fortnight after acing a training course on treating women with respect” a 15 year old Afghan dragged a Belgian caterer at a refugee centre down to the basement and raped her.


The dark irony, duly noted by Steyn, is that Mme Arbour was "the first prosecutor to charge rape as a crime against humanity and the author of several reports on rape as a 'weapon of war'." As Mark Steyn puts it in the exchange below, citing Arbour's influence in the Sudan genocide, "rape is not about sex, but about power."

In other words, according to Mme Arbour's own definitions, when Muslims rape European women and children — in public places in their home towns — it needs to be seen as an act of war, and indeed a war crime, and should be dealt with as such.

“There is no one on this side of the argument saying that all Muslims are bad” but that their arrival in such large numbers has resulted in the “once-sleepy city of Malmo” now being the “rape capital of Europe.”

Responding to Simon Schama’s assumption that, because previous waves of migrants had assimilated, this wave would be no different Farage echoed his shocking claims last year of some Muslim migrants posing a threat to the security of European nations, differentiating the current refugee crisis from “any other migratory or refugee wave in the history of mankind” in that “never before have we had a fifth column living in our communities that hates us, wants to kills us and wants to overturn our complete way of life.”

Tragically, most people don't know what is happening, but as the Munk debate proved, when we have the opportunity to present the truth, we have a very strong likelihood of winning people over to the side of reason and righteousness and the defense of Western civilization. The debate win by Steyn and Farage swayed the audience from almost 80% in favor of mass Muslim immigration to a nearly even split with the opposed.

The pro side was happy to talk about “your tired, your poor, your huddled masses,” because they’re abstract images, which liberals like... They’re feel-good words but that shouldn’t make the poet who wrote them in 1883 the author of global refugee legislation in 2016.

A civilized culture, which takes centuries of painstaking collaborative work to create, can be easily destroyed, and quickly. This is a reality conservatives understand, but liberals, consumed by guilt for past collective sins, and morally disarmed before the Other, choose to ignore. The Munk debate illuminated this important distinction, and for a change, realism won.

Mark Steyn closes his rebuttal by asserting that the diabolical epidemic of Muslim migrants mass raping European children in public places cuts to "the heart of the question." Indeed it does, for the 21st century West is finally being confronted with precisely why conquered Christians in the 7th century considered the invading Muslims a chastisement for their sins, Islam to be religion non grata and Muhammad the forerunner of the antichrist.

The lesson from all this? The god of Islam is a false god, Muhammad a false prophet, and Muslim culture is hopelessly corrupted by its spiritual roots. Christians must not assent to the "Same God Heresy." To do so is to blaspheme the Holy Trinity, confuse th faithful and lead many into apostasy.