“'What is happening to us today began 1,300 years ago.' In the 7th century, the genocide of Christians began, then in the darkness, now in the media spotlight. The agenda of Islam has remained always the same, namely to expel the Christians from the Middle East."

A brave, faithful and honest Orthodox bishop fearlessly speaks the truth about Islam. May we heed his warnings and reject the "Same God Heresy."

“What is happening in the Middle East will happen in Europe,”
(translated from «Was im Nahen Osten geschieht, wird auch in Europa passieren»), Tages Anzeiger, April 14, 2016 (thanks to Jihad Watch): 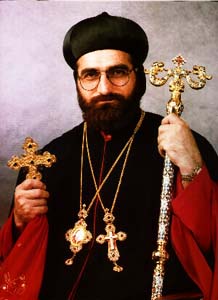 Isa Gürbüz, the Syrian Orthodox Church leader in Switzerland, calls Christians to be vigilant. The agenda of Islam is to take power.

“In 20 or 30 years there will be a Muslim majority in Europe. Half of European women will then wear a hijab.” This prediction doesn’t come from Michel Houellebecq or Thilo Sarrazin, but from Dionysos Isa Gürbüz, the Syrian Orthodox bishop in Switzerland. He resides in the idyllic Lake Zug Arth Capuchin monastery, with two monks and two nuns. From the monastery Mor Avgin, as it is called today, he oversees the 10,000 Syrian Orthodox faithful in Switzerland and 4,000 in Austria.

Isa Gürbüz is busy preparing for the Easter services, which are celebrated in his church in late April. Then his coreligionists will flock in the hundreds to Arth. Together they will pray, sing and debate – in the Aramaic native language, the sacred language that Jesus spoke. The Syrian Orthodox Church is the oldest of all. In her home in the former Mesopotamia, today Syria and Iraq, they are persecuted. “Arth has therefore become a center for the preservation of our endangered religion and culture,” says Gürbüz.

The fate of the Christians preoccupies the bishop.

Easter joy may not come easily for the bishop. He is too busy with the fate of Christians in the Middle East: “What today has caused thousands to join the terrorist groups of IS, Taliban or al-Qaida, is the extension of the genocide of 1915.” At that time nearly two million Christians – Aramean, Syrian and Greek Orthodox – perished, and millions converted to Islam. The Bishop continues: “What is happening to us today began 1,300 years ago.” In the 7th century, the genocide of Christians began, then in the darkness, now in the media spotlight. The agenda of Islam has remained always the same to him, namely to expel the Christians from the Middle East. Also in the coming years, the spirit of terror will reign there.

The 51-year-old bishop comes, as do most Syrian Orthodox Christians living in Switzerland, from the eastern part of Turkey, which formerly belonged to Syria. Living at Turkey’s border with Syria at the beginning of the century were still 230,000 Syrians; today there are virtually none left. Turkey is the enemy of Christians, says Isa Gürbüz. He was first a monk at the famous monastery of Mor Gabriel, left in 1989, and then went Southeast to teach Syrian and liturgy at the theological seminary in Damascus. In 1997, he became the first Syrian Orthodox bishop in Germany, before he came to Arth a decade ago….

…Isa Gürbüz can hardly imagine a future Syria without Assad. A better man is not easy to find, he said. Before the war, Syria was the only country in the Middle East where Christians were left undisturbed to live their faith. “If Assad is eliminated, the same thing could happen as in Iraq, where after the fall of Saddam Hussein, democracy failed and Islamist groups took over the reins.” The Arab Spring was for Isa Gürbüz just a game, an interlude. “Because Islam ultimately accepts no democracy, but wants to impose Sharia law.”

The bishop is traumatized by the persecution in the Middle East, so that for him it is a matter of urgency to call for vigilance, especially to churches that are intent on political correctness. It is naive to think that the millions of refugees who are now coming to Europe via Turkey will all adapt and live with the Christians in Europe in peace. Also among the refugees there are terrorists. “Why have the Gulf states, the Emirates and Qatar not taken any refugees?” Because it is their agenda to convert Europe to Islam.

Isa Gürbüz already sees Eurabia in the mind’s eye: the number of Muslims with many children will grow rapidly, will take power and will begin the persecution, he believes. “What is happening today in the Middle East will happen here in Europe.” He do not call for hatred, insists the bishop. Only for him, 1,300 years of history of persecution have taught him not to trust Muslims. He sees the beginnings of fateful proselytizing in Europe by Wahhabi Saudi Arabia and the Turkish Ministry of Religion Diyanet, in mosques in this country….