Islamic State is 'beheading, raping, and selling' Christians while Obama does nothing, asserts Justice Group

The American Center for Law and Justice is pressing the Obama Administration to act swiftly to stop the genocide of Christians and other minorities in the Middle East, highlighting the administration's inaction on several fronts. But action is unlikely to be forthcoming.

As Raymond Ibrahim has shown, reporting of Muslim persecution of Christians does not fit "The Narrative" which the Obama Administration holds to, that Islam is innocent and there is no religious dimension to the strife in the Middle East and Africa. Therefore the plight of Christians will likely continue to be ignored by the U.S. government as a matter of Obama's anti-Christian, pro-Islam policy.

Such is the political dimension of this new age of martyrdom in which we live. 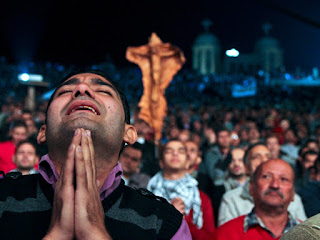 The American Center for Law and Justice is urging President Barack Obama to defend Christians who are suffering intense persecution from Islamic State terrorists, especially by naming an ambassador to fill the vacant mission of Special Envoy to Promote Religious Freedom of Religious Minorities in the Near East and South Central Asia.

The ACLJ has drafted a petition appealing to the Obama Administration to act swiftly to stop the genocide of Christians and other minorities in the Middle East. The petition has already garnered more than 93,000 signatures.

The organization reminds the administration that ISIS is “beheading, raping, and selling Christians” and that hundreds of thousands of Christians have been forced to flee or die. But while ISIS tracks down Christians for sale and slaughter, the Obama Administration and other Western leaders stand by idle.

For more than a year, the justice group states in an article on Thursday, “President Obama has failed to appoint an Ambassador to lead a Special Envoy to Promote Religious Freedom of Religious Minorities in the Near East and South Central Asia.”

“While Christians and other religious minorities are decimated in that region, the Obama administration leaves this vital position unfilled. This is why the ACLJ has urged them to fill this spot and will continue to do so,” it said.

Just this week, in fact, the Catholic relief agency Aid to the Church in Need announced that “Christians have become a form [of] currency in this tragedy.” They report that many Arab Christians are being abducted and held for ransom as a means of funding ISIS.  One priest’s family managed to scrape together the $120,000 ransom put on his head, but once they paid the sum, they were mailed his cut-up body parts in a box, the ACLJ notes.

The Islamic State has seized significant territory across Iraq and Syria, and for more than a year now has been heavily targeting Christians and other religious minorities.

“Despite President Obama’s insistence that there is no need for greater U.S. involvement with ISIS,” the letters states, “these jihadists continue to gain more influence, money, and power.  Every day, we see new accounts of Christians & Yazidis begin captured, women being enslaved, and mass murders being committed by ISIS.”

“If this is not the kind of evil that our government is established to stop, then one must ask what is,” the ACLJ said. “This evil must be stopped.”

When the Obama Administration when it intended to appoint a special envoy to protect religious minorities in the Middle East and South Central Asia—even though Congress passed legislation over a year ago creating the post—the White House responded that it does not know.

“We have no personnel announcement to make at this time,” said Alistair Baskey, a spokesman for the White House’s National Security Council told CNSNews.com in response to queries as to when the post will be filled and why there has been such a long delay in filling the position.