Must Read Book: HOUSE OF WAR: ISLAM’S JIHAD AGAINST THE WORLD, by Gregory Davis 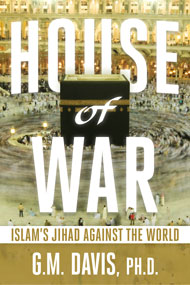 This is a timely publication which provides a penetrating examination of Islam, its religious and political dimensions, and the "clear and present danger" to Christians and Western Civilization which arises from its ideology. It is a relatively slim volume (208 pages), yet is densely packed and rock-ribbed, and makes for a great introduction or handy reference on the threat of Islam.

What is perhaps most amazing is that, although this work was first published several years ago in hardcover, and therefore lacks any specific reference to ISIS (the Islamic State Caliphate) or certain other jihad terrorist groups which formed more recently, it is shockingly contemporary, as jihad ideology itself is essentially unchanged from the days of its founder, Muhammad. As one reads 'House of War', one experiences a steady flash of light bulbs turning on, of "Aha! moments", as the true goals and motivations of Muslim extremists are detailed from the supremacist sacred texts of Islam.

The author, Gregory Davis, is an Orthodox Christian, and a dear friend and encourager to me. The original edition of this book, and his documentary film, Islam: What the West Needs to Know, were two of my early sources which spurred me on to write Facing Islam and launch this blog. I cannot commend Greg's work highly enough.

Order two copies and share one with that interested soul looking to understand Islam. Publisher's description and link to order below.

Over the past several decades, countless wars and terrorist attacks have been perpetrated by various groups and individuals claiming to act in the name of Islam. Yet Western leaders of virtually every stripe and party have consistently affirmed their belief that, despite the violence done in its name, Islam is a "religion of peace."

The critical question is, who is right? Do Muslims who wage violent jihad against unbelievers fundamentally misunderstand their own religion? Or are Western leaders taking refuge in a comfortable fiction while shielding themselves from an exceedingly difficult truth?

With the West engaged in military operations in multiple Islamic countries and with growing Muslim minorities at home, the answer is of critical importance to the future of Western Civilization.


Relying primarily on Islam's own sources, "House of War: Islam's Jihad Against the World," formerly "Religion of Peace? Islam's War Against the World" and now available in paperback, cogently demonstrates that Islam is a violent, expansionary ideology that seeks the subjugation and destruction of other faiths, cultures and systems of government.

Islam is as much a system of government as it is a religion, and it seeks to extend its own peculiar legal code, Sharia law, over the entire world. Islamic doctrine divides the world into two conflicting realms: the House of Islam, where Islamic law holds sway, and the House of War, the rest of the world on which war must be waged until Islam is triumphant. The "peace" that Islam seeks is a world united by the Islamic faith and Sharia law in which all other faiths and political regimes have been suppressed or eliminated. "Jihad" is the violent struggle against the House of War world to bring it into "submission" (the Arabic meaning of the word "Islam") to Islamic rule.

Westerners have been indoctrinated to believe that the jihadists they see on television are extremists who have twisted their religion to serve a violent purpose. In fact, their actions are right out of orthodox Islam and are grounded in the Koran and the life of Muhammad.

By delving into the Islamic writings, Davis reveals the fastest-growing religion in the world for what it is: a violent, expansionary ideology that poses an existential threat to Western Civilization – a fact to which Western leaders remain determinedly blind.

“A very important work at a very important time. Anyone interested in understanding the growing violence on the world scene today must read this book. Its message for America and the West is, ‘Wake up before it's too late.’" – Gary Bauer, president, American Values

“A valuable, well-argued contribution to the public understanding of Islam . . . [House of War] conveys in a short space what the West needs to know about Islam: that its violent aspects are not the result of deviance but of orthodoxy.” – Robert Spencer, director, www.JihadWatch.com

“This book provides a timely reality check. . . . The refusal of the elite class to open its eyes to reality and protect Western nations from the threat is the biggest betrayal in history.” – Serge Trifkovic, author of "The Sword of the Prophet" and "Defeating Jihad"


G.M. Davis is an author and filmmaker. He graduated from the University of Rochester in 1997 with a B.A. in political science, and from Stanford in 2003 with a Ph.D. in the same area of study. In 2005, he produced and directed the feature documentary "Islam: What the West Needs to Know."

WND Exclusive Autographed Edition
Also available in a special "Autographed Edition." Signed books are precious treasures. An autographed book from your favorite author can turn an item of personal value into a cherished keepsake and a wonderful addition to any book collection.