“Wake up! The cancer is at your door. They will destroy you. We, the Christians of the Middle East are the only group that has seen the face of evil: Islam...


“Please, if there’s anyone who still thinks ISIS doesn’t represent Islam, know that they are wrong. ISIS represents Islam one hundred percent.”

Let us all try to do something — whatever we can — in the face of the tsunami of evil wiping away our Christian brothers and sisters in the Middle East, Egypt and North Africa, Pakistan, Indonesia, throughout the entire Islamic world. Let us pray for them, even as we start to heed the warnings and cries of the new confessors and martyrs like Fr Douglas al-Bazi, who daily follow Christ to their Golgotha, bearing their unimaginable cross!

Speaking in 1980, Blessed Hieromonk Seraphim (Rose) of Platina had this to say about Golgotha:

It is a law of the spiritual life that where there is Golgotha—if it is genuine suffering for Christ—there will be resurrection. This resurrection first of all occurs in human hearts, and we do not need to be too concerned what outward form it might take by God’s will...

Our inward, spiritual resurrection is what we should be striving for, and the events in Russia give us hope that there will yet be a resurrection of true, suffering Christianity, not only in Russia, but wherever hearts have not become entirely frozen. But we must be ready for the suffering that must precede this...

Are we in the West ready for this? Golgotha does not mean the incidental sufferings we all go through in this life. It is something immense and deep, which cannot be relieved by taking an aspirin or going to a movie. It is what Russia has gone through and is now trying to communicate to us. Let us not be deaf to this message. By the prayers of all the New Martyrs, may God give us the strength to endure the trials coming upon us and to find in them the resurrection of our souls. 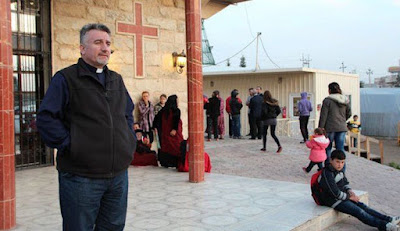 Rome. “Please, if there’s anyone who still thinks ISIS doesn’t represent Islam, know that they are wrong. ISIS represents Islam one hundred percent.” Father Douglas al Bazi, an Iraqi Catholic parish priest in Erbil, raised his voice during an intervention at the Meeting in Rimini, with a choice of words – in a provocative way and in hard tones – that few had ventured use so far.

He carries on his own body the scars of the torture he underwent nine years ago, when a band of Jihadists kidnapped him for nine days, keeping him in chains and blindfolds along with a broken nose from being kneed: “For the first four days they didn’t even give me anything to drink. They would walk past me saying ‘Father, do you want some water?’ All day long they would listen to the reading of the Koran to let the neighbours hear what good believers they were.”…

Father Douglas Al Bazi is in charge of two refugee shelters for Christians who survived the advance of the black horde – not far from Ankawa. After the marking of houses with the “n” of the Nazarene plus the Christians displaced on the Nineveh plain, a year ago, “from morning to night we receive thousands of refugees” and the exodus continues. “I’m proud to be an Iraqi, I love my country. But my country is not proud that I’m part of it. What is happening to my people is nothing other than genocide. I beg you: do not call it a conflict. It’s genocide”, said the priest, who doesn’t want to hear anything about “moderate Islam”:

“When Islam lives amidst you, the situation might appear acceptable. But when one lives amidst Muslims, everything becomes impossible. I’m not here to instigate you to hate Islam. I was born amid Muslims and I have more friends among them than I have with Christians. But people change and if we go to my country, no-one will be able to distinguish the light from the darkness. There are those who say: 'but I have lots of Muslim friends who are very nice'. Yes, certainly! They are nice over here! Over there the situation is very different!”

A situation in which regard the vice-President of the French Conference for Imams also had some tough words to say. Hocine Drouiche, also the Imam of Nimes, intervened last July at the European Parliament: “In the world, Christians are being persecuted, hunted down, deprived of work, imprisoned, tortured and murdered. All means are being used to force them to deny their faith, including the ritual of collective rape, considered in some states a form of penal sanction. Owning a Bible has become a crime, religious worship is prohibited and there has been a return to the times of Masses in the caves and the first martyrs”. And the fault, Drouiche had added in a discourse which had not been highlighted very much by the European media”, is contemporary Islam”, which is much closer “to sectarianism rather than a universal, open religion”.

“I believe in the end they will destroy us”

Father al Bazi’s account is of one who runs the risk of being murdered on the street every day: We never know if coming out of the church we’ll be able to go into it again alive. In Baghdad they had the church explode right in front of me. They shot me on the legs with a AK-47, a type of Kalashnikov, and probably sooner or later they’ll kill me”. Yet his faith is solid: “When they put me in chains, during my kidnapping, they tightened a big padlock on my wrists. On the chain there were ten extra rings, which I used to recite the Rosary. I have never prayed it so earnestly as I did in that situation”. “I – added Father Douglas – don’t implore your help. I’m not frightened just as my people aren’t frightened either. I believe they’ll destroy us in the end. But I also believe that we will have the last word. Jesus told us that we need to carry our own crosses, and that is what we in the Middle East are doing. Yet the most important thing is not the carrying of the cross, but following it. And following it means accepting, challenging and committing oneself right to the very end”.

“We need to have patience and carry the cross each day, but we also must react”, said Father Ibrahim Alsabagh, parish priest in Aleppo, echoing him, and reported how the city is now “divided in tens of parts, each one of them in the hands of a different group of Jihadists. Our Church of St. Francis is sixty metres from the firing line. They have already hit many churches, we don’t know when it will be our turn”. Here is why Father Douglas, at the end of his intervention, launched a warning to the feeble West:

“Wake up! The cancer is at your door. They will destroy you. We, the Christians of the Middle East are the only group that has seen the face of evil: Islam”….