The Importance of St Herman for Orthodox Christians in America Today 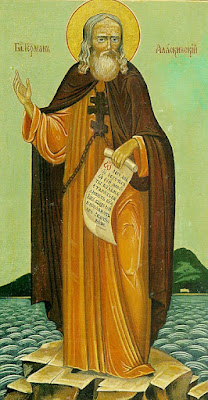 In 1794, along with nine other monastics he was sent to Alaska to evangelize the natives there. In time St. Herman would become the sole survivor of the original missionaries.

Throughout his long life he cared for the natives of the Kodiak area, nursing them in their illnesses, educating them, and defending them from the abuse of the Russian fur-traders. By his meekness and firm faith he won the love and respect of all who came to know him, and inspired many to follow Christ.

Eventually settling on nearby Spruce Island, he lived a mostly eremitic life, while also establishing an orphanage for the children of parents who had died during epidemics.

By the power of God, St. Herman was able to see into the hearts of others, as well as into the future. He worked miracles during his life, such as stopping a forest fire and a tsunami by his prayers. To this day he remains a wonderworker, healing the souls and bodies of those who ask for his intercessions before the throne of God.

St Herman on 'The Way of a Christian'

"A true Christian is made by faith and love of Christ. Our sins do not in the least hinder our Christianity, according to the word of the Savior Himself. He said: I am not come to call the righteous, but sinners to repentance; there is more joy in heaven over one who repents than over ninety and nine just ones. Likewise concerning the sinful woman who touched His feet, He said to the Pharisee Simon: to one who has love, a great debt is forgiven, but from one who has no love, even a small debt will be demanded. From these judgements a Christian should bring himself to hope and joy, and not in the least accept the torment of despair. Here one needs the shield of faith.

"Sin, to one who loves God, is nothing other than an arrow from the enemy in battle. The true Christian is a warrior fighting his way through the regiments of the unseen enemy to his heavenly homeland. According to the word of the Apostle, our homeland is in heaven; and about the warrior he says: we wrestle not against flesh and blood, but against principalities, against powers, against the rulers of the darkness of this world, against spiritual wickedness in high places (Eph.6: 12)].

"The vain desires of this world separate us from our homeland; love of them and habit clothe our soul as if in a hideous garment. This is called by the Apostles the outward man. We, traveling on the journey of this life and calling on God to help us, ought to be divesting ourselves of this hideous garment and clothing ourselves in new desires, in a new love of the age to come, and thereby to receive knowledge of how near or how far we are from our heavenly homeland. But it is not possible to do this quickly; rather one must follow the example of sick people, who, wishing the desired health, do not leave off seeking means to cure themselves."

The Importance of St Herman for Orthodox Christians in America Today

When we really stop to reflect upon what Blessed Father Herman accomplished in Alaska—and what his significance is for us today—we should be stunned by his humility, his selflessness, and his simple and pure dedication and obedience to his original mission to bring the Orthodox Faith to his new land.

The greater part of his forty-plus years in Alaska he lived alone, tirelessly caring for the native Alaskan peoples who, seeing the Love of Christ embodied in their beloved "Apa" (grandfather) became themselves pious and faithful Orthodox Christians. We should be similarly moved and converted in our hearts by Elder Herman's witness. As one North American monastic writer (Schema-Hieromonk Ambrose (Young)) has put it:

"So what is the lesson the Lord wants American Orthodox like us to learn from St. Herman? He was a meek and humble monk, not even a priest, but a strong witness against injustice and a confessor of the true Faith. These are the qualities, I believe, that Orthodoxy in America must emulate. But so far, we aren't. We are obsessed with jurisdictional administrative issues, while the inner life of the Church—which leads to repentance and deification through humility—is largely neglected at the official, organizational, level...

"We need a 'revival' inspired by St. Herman!"


Therefore, let us persevere in our faith and in doing good, being inspired in the depths of our hearts by our beloved Elder and Wonderworker, St Herman of Alaska, that we may embody his teaching:

"From this day, from this hour, from this minute,
let us love God above all,
and strive to fulfill His holy will!"


Learn more about the amazing life of St Herman through books, articles, icons and videos on this special resource page...