Islam's war against Christianity continues to advance. In this report you see it all: Muslims conquering, destroying Christian sites, taking of captives, offering the "three choices" — convert to Islam, pay the jizya, or death." And tens of thousands of Muslims from all over the world are flocking to the Middle East to join the Islamic State because they see it adhering to pure Islam. 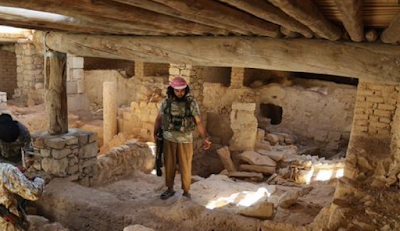 Many were the Ways of Life that have passed away before you: travel through the earth, and see what was the end of those who rejected Truth. (Qur’an 3:137)

This is one of the foundations of the Islamic idea that pre-Islamic civilizations, and non-Islamic civilizations, are all jahiliyya — the society of unbelievers, which is worthless. Obviously this cuts against the idea of tourism of ancient sites and non-Muslim religious installations. V. S. Naipaul encountered this attitude in his travels through Muslim countries. For many Muslims, he observed in Among the Believers, “The time before Islam is a time of blackness: that is part of Muslim theology. History has to serve theology.” Naipaul recounted that some Pakistani Muslims, far from valuing the nation’s renowned archaeological site at Mohenjo Daro, saw its ruins as a teaching opportunity for Islam, recommending that Qur’an 3:137 be posted there as a teaching tool.

Islamic State (Isis) militants have bulldozed parts of the ancient monastery of Mar Elian in Qaryatain, a strategic town located in the central Syrian province of Homs which has been seized from forces loyal to president Bashar al-Assad earlier this month. IS-linked Twitter accounts posted pictures of the destruction of the monastery, which was founded in 432 on the claimed spot of St. Elian’s death, for “worshipping a God other than Allah”.

According to the UK-based Syrian Observatory for Human Rights (SOHR), IS also transferred dozens of Assyrian Christians, who were kidnapped after the capture of Qaryatain, near its northern Syria de facto capital of Raqqa.

Mar Elian is also the place where priest Jacques Mourad was abducted back in May. Mourad was known to help both Christians and Muslims and was preparing aid for the arrival of hundreds of refugees from Palmyra….

The jihadist group captured Qaryatain, which lies south-west of Palmyra Roman ruins and 85km from Homs, after heavy clashes with regime forces. Then the group abducted about 230 Syriac Orthodox and Syriac Catholics. Of those captured, 48 have been released and 110 were transferred to Raqqa, according to SOHR. The Christians would be given the choice of conversion to Islam or paying “jizya”, a tax on non-Muslims.

Earlier in March, IS blew up part of the ancient monastery of Mar Behnam in Iraq near the predominantly Christian town of Qaraqosh, south-east of Mosul. Photos released by IS members on social media show the 4th-century monastery’s tomb complex of Mar (Saint) Behnam and Mart (Saint) Sarah reduced to rubble.The monastery was also founded in the 4th century and built on the tomb of Berhnam and his sister Sarah, who were converted to Christianity by St Matthew. IS fighters stormed the monastery in July 2014 and expelled its resident monks.

“They’re doing this gradually. They scared the people away and now they’re destroying these people’s heritage. I don’t understand: why would you do that? Why destroy something it’s not yours?,” al-Jeloo said. “No palace, monastery, church, ruins is ours to destroy. It’s the world’s property. That’s why I’m concerned the world’s community is not doing enough to stop Isis.”

In March, an IS-linked Twitter account posted pictures of what appears to be jihadists smashing crosses and defacing statues, Christian murals and paintings at St George Chaldean Catholic monastery near Mosul. The monastery, located on the Ba’werah neighbourhood on a hill north of Mosul on the other side of the Tigris river, was founded by the Assyrian Church of the East in the 10th century but rebuilt as a seminary by the Chaldean Catholic Church in 1846.

Also in March, IS militants reportedly bulldozed the 2,000-year-old city of Hatra, and the Nimrud archaeological site near Mosul. On 26 February, the jihadist group published a video showing militants destroying artefacts in a Mosul museum and at the Nergal Gate to ancient Nineveh.