Orthodox Christians may wish to study and share this fine summary of the linkage between mosques and outbursts of Muslim jihad terror attacks. We must face and admit the undeniable fact that there is murderous evil at the core of Islam. It is commanded in the Quran, was lived by Muhammad, is preached in the mosques, and is the cause behind the new age of martyrdom we have entered into. 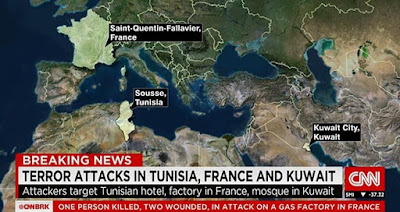 On June 26, Saif Rezgui walked on to a beach in Tunisia and opened fire on German, British, and Irish sunbathers in front of the Imperial Marhaba resort hotel, killing 39 and wounding dozens more. If various world leaders are to be believed, the massacre had nothing to do with Islam. In response to the attack which left thirty British citizens dead, Prime Minister David Cameron said the terrorism “is not in the name of Islam. Islam is a religion of peace.” A day later, Australian Prime Minister Tony Abbott assured the world that “what’s being done by Daesh [the Islamic State] has nothing to do with God, it has nothing to do with religion.”

There was one notable exception to the usual nothing-to-do-with-Islam mantra. Immediately after the attack, Tunisia’s prime minister, Habib Essid, ordered the closing of 80 mosques.

Of course, the leader of a 98 percent Muslim country can’t be expected to understand Islam nearly as well as the leaders of Britain and Australia. Nevertheless, Essid’s action provides food for thought. Mosques, after all, do have something to do with Islam. “Some mosques continue to spread their propaganda and their venom to promote terrorism,” Essid reportedly said. “No mosque that does not conform to the law will be tolerated.”

According to a Reuters report, Rezgui was “a dedicated student from a stable family who enjoyed partying and practiced break dancing.” Until, that is, “he appeared to have come into contact with extremist preachers about six months ago.”

Where do you meet extremist preachers? In extremist mosques, of course—the same sort of places attended by the two terrorists who two months previously had killed 21 foreign tourists at the Bardo Museum in Tunis. According to Reuters, “the two Bardo gunmen were also radicalized in their local mosques by hardliners.”

Another indication that the beach massacre might have had something to do with Islam is that Rezgui only targeted foreigners. As he pursued the tourists, he shouted to Tunisians to “get out of the way.” Might that have had something to do with the fact that the Tunisians were likely to be Muslims and the tourists were likely not? One other confirmation of the religious motivation for the attack came from the Islamic State. A spokesman for IS praised the attack as an operation against a “bordello”—a reference to the immodest dress of the beachgoers. Apparently, cartoons of Muhammad are not the only thing that hardline Muslims consider as provocation sufficient to warrant murder.

Not all mosques are centers of extremist radicalization. On the other hand, it’s likely that the average Westerner grossly underestimates the percentage of radical mosques. Fr. Samir Khalil Samir, an Egyptian Jesuit who is also an expert on Islam, writes:

In many Muslim countries … the mosques are monitored by the police on Friday. There is a simple reason for this: many political decisions start from the mosque during the Friday khutba [sermon]. Historians of Islam know that many riots and revolutions were launched from the mosques and that jihad is often proclaimed during the khutba.

Not coincidentally, many of the Arab Spring demonstrations in 2011 were set in motion from mosques following Friday prayers. And again, it’s probably no coincidence that Rezgui scheduled his massacre for a Friday during the holy month of Ramadan.

It’s tempting to think that the mosque-mayhem connection is something that’s peculiar to Arab societies, but four separate studies of American mosques revealed that about eighty percent of them provide extremist literature and occasionally feature extremist preachers. While this doesn’t mean that every American mosque is a hotbed of terrorism, it does suggest cause for concern. For example, two very prominent American mosques which have long been thought to be of the moderate mainstream kind are now known to be connected with numerous terrorists, some of them of the high-profile variety. Major Nidal Hasan, the Fort Hood jihadist, was mentored at the Dar Al-Hijra Mosque in Falls Church, Virginia. So were three of the 9/11 hijackers. And the person who was mentoring them was Anwar Al-Awlaki, who later became one of the chiefs of operations for Al-Qaeda in Yemen. Meanwhile, the Islamic Society of Boston has two mosques (one in Boston and one in Cambridge) which were attended by the Tsarnaev brothers and nearly a dozen other known terrorists, including the founder of Boston’s Islamic society, Abduraham Alamoudi, who is currently serving a twenty-three-year prison term for terror-related activities.

Christians assume that mosques, like churches, are simply places of prayer. Many of them are, but many mosques are also places of recruitment and radicalization—staging areas for jihad. Subsequent to the beach massacre, weapons caches were found in forty Tunisian mosques. As a popular Muslim poem puts it, “The mosques are our barracks, the domes our helmets, the minarets our bayonets, and the faithful our soldiers.”

Not all Muslims think of mosques in this way, but as Prime Minister Essid understands, a not insignificant number do. He is not alone in this assessment. As Fr. Samir notes, Muslim governments have historically kept a close eye on mosque activities. Muslim leaders may give lip service to the notion that violence has nothing to do with Islam, but their actions tell a different story. Western leaders need to start paying attention.