Oldest Qur’an fragments in the world discovered in the UK? Maybe, maybe not

Robert Spencer has written a superb analysis of some of the key problems with this story that many of you have likely seen already.

Oldest Qur’an fragments in the world discovered in the UK? Maybe, maybe not
by Robert Spencer, Jihad Watch — July 22, 2015 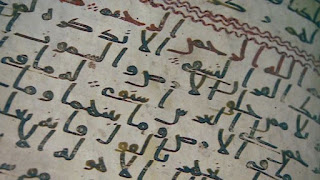 This BBC article is circulating widely, but it raises more questions than it answers, and reveals more about the wishful thinking of the academic and media establishments than it does about the Qur’an.

The article is riddled with academic and journalistic sloppiness. We’re told that the radiocarbon dating shows, “with a probability of more than 95%, the parchment was from between 568 and 645.” Very well, but does the ink date to that time as well? We are not told. Parchment was often reused in the ancient world, with the earlier text erased and written over, and so if a parchment dates from 645, that doesn’t necessarily mean that the text does.

However, it is impossible to discover any more details from this shoddy BBC presentation. The best photo of this manuscript that the BBC provides shows clear traces of another text underneath the main text. It is not clear from the photo whether that is the text from the other side bleeding through on the photograph, or even if there is any text on the other side; nor does the BBC tell us whether or not the parchment shows signs of having been a palimpsest — that is, a parchment that was used more than once for different texts. There is also some red ink in the top lines of the manuscript in the photo but not in the succeeding lines. Has the red ink faded from the other sections, or is it itself evidence of the ink fading? Or is it a later hand filling in areas that had faded away (and possibly altering the text)? The BBC doesn’t tell us, yet this is an extremely salient point. Another recently discovered and much-touted fragment of the Qur’an, now in Germany and dated from between 649 and 675, shows clear signs of alteration, raising the possibility that the Qur’anic text was altered over time. If this is a possibility also for the University of Birmingham manuscript, the BBC should tell us so. But it doesn’t.

What’s more, if the text along with the parchment really dates from between 568 and 645, it may not be a fragment of the Qur’an at all. The Qur’an, according to Islamic tradition, was compiled in its definitive form in the year 653 by the caliph Uthman, who ordered all variant texts burned and the canonical version distributed to all the provinces within his domains. As I show in my book Did Muhammad Exist?, however, there are numerous reasons to doubt this story. The principal one is that if the entire Islamic world had copies of the Qur’an by the mid 650’s, why is it that not until the latter part of the seventh and early part of the eighth century do mentions of the Qur’an begin to appear? The Dome of the Rock inscriptions date from 691; they are made up of many Qur’an verses, but out of their Qur’anic order and some with notable changes in wording. Who would have dared to change the words of Allah? And the first clear reference to the Qur’an as such occurred around the year 710—eighty years after the book was supposedly completed and sixty years after it was supposedly collected and distributed. During a debate with an Arab noble, a Christian monk of the monastery of Beth Hale (of which there were two, one in northern Iraq and the other in Arabia; it is not known in which one this monk lived) cited the Qur’an by name. The monk wrote, “I think that for you, too, not all your laws and commandments are in the Qur’an which Muhammad taught you; rather there are some which he taught you from the Qur’an, and some are in surat albaqrah and in gygy and in twrh.”

By this point Arab armies had conquered a huge expanse of territory, stretching from North Africa, across the Levant, Syria, and Iraq, and into Persia, and yet those eight decades of conquest had produced scarcely a mention of the book that supposedly inspired them. And when the Qur’an finally was mentioned, it appears that the book was not even in the form we now know. Surat albaqrah (or al-Baqara) is “the chapter of the Cow,” which is the second, and longest, sura of the Qur’an. The eighth-century monk thus quite clearly knew of a Qur’an that didn’t contain this sura; he considered surat albaqrah to be a stand-alone book, along with gygy (the Injil, or Gospel) and twrh (the Torah). It is unlikely that the monk simply made an error: who ever mistakes a chapter of a book for a separate book?

In sum, the more one looks at this curious story, the less there is to see. It seems indisputable that an ancient manuscript has been confirmed to be ancient. Has its text been altered? We aren’t told. Is it part of the Qur’an? We can’t be sure. Does it correspond to the modern standard Qur’anic text? We aren’t told. The only thing we can really be sure of about this story is the closing statement from Dr. Muhammad Isa Waley: this “is news to rejoice Muslim hearts.” That may be the primary objective all along.

What may be the world’s oldest fragments of the Koran have been found by the University of Birmingham.

Radiocarbon dating found the manuscript to be at least 1,370 years old, making it among the earliest in existence.
The pages of the Muslim holy text had remained unrecognised in the university library for almost a century.

The manuscript had been kept with a collection of other Middle Eastern books and documents, without being identified as one of the oldest fragments of the Koran in the world.

When a PhD researcher, Alba Fedeli, looked more closely at these pages it was decided to carry out a radiocarbon dating test and the results were “startling”.

The university’s director of special collections, Susan Worrall, said researchers had not expected “in our wildest dreams” that it would be so old.

“Finding out we had one of the oldest fragments of the Koran in the whole world has been fantastically exciting.”


The fragments of the Koran are still legible

The tests, carried out by the Oxford University Radiocarbon Accelerator Unit, showed that the fragments, written on sheep or goat skin, were among the very oldest surviving texts of the Koran.
These tests provide a range of dates, showing that, with a probability of more than 95%, the parchment was from between 568 and 645.

“They could well take us back to within a few years of the actual founding of Islam,” said David Thomas, the university’s professor of Christianity and Islam.

“According to Muslim tradition, the Prophet Muhammad received the revelations that form the Koran, the scripture of Islam, between the years 610 and 632, the year of his death.”

Prof Thomas says the dating of the Birmingham folios would mean it was quite possible that the person who had written them would have been alive at the time of the Prophet Muhammad.

“The person who actually wrote it could well have known the Prophet Muhammad. He would have seen him probably, he would maybe have heard him preach. He may have known him personally – and that really is quite a thought to conjure with,” he says.

Prof Thomas says that some of the passages of the Koran were written down on parchment, stone, palm leaves and the shoulder blades of camels – and a final version, collected in book form, was completed in about 650.

He says that “the parts of the Koran that are written on this parchment can, with a degree of confidence, be dated to less than two decades after Muhammad’s death”.

“These portions must have been in a form that is very close to the form of the Koran read today, supporting the view that the text has undergone little or no alteration and that it can be dated to a point very close to the time it was believed to be revealed.”

The manuscript, written in “Hijazi script”, an early form of written Arabic, becomes one of the oldest known fragments of the Koran.

Because radiocarbon dating creates a range of possible ages, there is a handful of other manuscripts in public and private collections which overlap. So this makes it impossible to say that any is definitively the oldest.

But the latest possible date of the Birmingham discovery – 645 – would put it among the very oldest….

Dr Waley suggests that the manuscript found by Birmingham is a “precious survivor” of a copy from that era or could be even earlier.

“In any case, this – along with the sheer beauty of the content and the surprisingly clear Hijazi script – is news to rejoice Muslim hearts.”