St Paisios of Mount Athos: 'There's a war on today, a holy war. I must be on the front lines.'

"Today's situation can be resisted only spiritually, not by worldly means..."


From an Orthodox Church Bulletin comes this 'word' (scroll to bottom) from the newly glorified St. Paisios the Athonite, which is directly applicable not only to the assault on the Faith, the Family and the Church by secularism, but also to the challenge and threat of Islam.

How many Orthodox Christians are so poorly grounded in their faith as to believe Islam is wholly compatible with Christianity? One of the reasons I wrote my book was to warn those like the young woman in my former parish (whom I write about in my Epilogue), who sincerely believed that because Muslims venerate Jesus, therefore they are virtually one with us. When she began dating a Muslim man, she was scandalized by our priest warning her that if she married a Muslim, she would be denying Jesus Christ and committing apostasy. She could not be dissuaded, and soon turned away from Christ and became a Muslim.

I recall another case of an Orthodox woman of Lebanese descent (whom I have known for many years) with whom I had a shocking discussion following the Divine Liturgy one Sunday. She was relating her views on the historical procession of the monotheistic religions, from Judaism to Christianity to Islam, and asserted that this sequential ordering reflected progressively higher forms of knowledge, with Islam representing the highest and most sublime form of knowledge! This due to Muhammad receiving supposedly divine revelations of the literal words of God.

Apparently this woman failed to be touched by the great mystery of the ultimate revelation: the very Word and Logos of God becoming incarnate, or by our divine calling to be children of God through the indwelling of the Holy Spirit, acquiring the Mind of Christ, the Mind of God Himself. This poor woman, through listening to ideas "in the air" and assenting with her fallen reasoning had given herself over to an anti-Christ false "gnosis" which leads straight to apostasy.

The bizarre cognitive dissonance alone of an Orthodox Christian putting forth such a view was bad enough, but to hear someone say such a brazen and blasphemous heresy immediately after receiving Holy Communion — the very Body and Blood of our Lord, God and Savior Jesus Christ — was one of the most disturbing moments of my Christian life.

Truly the enemy of souls is hard at work, striving however he can to lead people into spiritual delusion. As the Lord teaches us, Satan is the "father of lies" (JN 8:44) and the multifaceted heresy of Islam and our modern world's affirmation of it and all other religions as equally valid paths to God are among his most successful deceptions.

Satan seeks to increase his harvest of souls, drawing as many into perdition as he can. He uses governments, culture, comfort, affluence, political correctness, the desire to be "nice", to get along, and to be liked, to make us timid and ashamed to proclaim and live our faith. He is quite happy and content with Christians who remain silent and do nothing, for, as St Gregory the Theologian warned, "By your silence you can betray God."


But our calling, our task, is to become fully Christian, to become in reality — "ontologically" — what we already are by grace through Baptism and Chrismation. In the words of Fr Seraphim Rose:

Christian compromise in thought and word and negligence in deed have opened the way to the triumph of the forces of the absurd, of Satan, of Antichrist. The present age of absurdity is the just reward of Christians who have failed to be Christians.

It is futile, in fact it is precisely absurd, to speak of reforming society, of changing the path of history, of emerging into an age beyond absurdity, if we have not Christ in our hearts; and if we do have Christ in our hearts, nothing else matters.

Now one cannot be a half-hearted Christian, but only entirely or not at all.


Let us all respond to Fr Seraphim's stirring challenge, and the following words from the newly glorified St Paisios of Mt Athos. Let us do what we can, with God's help. 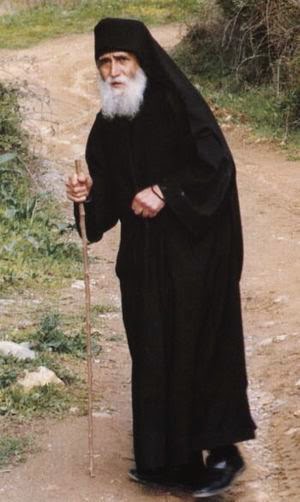 "Today there are many who strive to corrupt everything: the family, the youth, the Church. In our day it's a true witness to speak up for one's people, for the state is waging war against divine law. Its laws are directed against the Law of God.

"Today they're trying to destroy faith, and for the edifice of faith to fall they quietly pull out one stone, then another. But we're all responsible for the destruction; not just those who destroy, but we who see how faith is being undermined and make no effort to strengthen it. As a result the seducers are emboldened to create even greater difficulties for us, and their rage against the Church and monastic life increases.

"Today's situation can be resisted only spiritually, not by worldly means. The storm will continue to rage a bit, will throw all the flotsam, everything unnecessary, onto the shore, and then the situation will become clearer. Some will receive their reward, while others will have to pay their debts.


There's a war on today, a holy war.
I must be on the front lines.

"Today there are many who strive to corrupt everything: the family, the youth, the Church. In our day it's a true witness to speak up for one's people, for the state is waging war against divine law. Its laws are directed against the Law of God.

"But we are responsible for not letting the enemies of the Church corrupt everything. Though I've heard even priests say, "Don't get involved in that. It's none of your business!" If they had reached such a non-striving condition through prayer I would kiss their feet. But no! They're indifferent because they want to please everyone and live in comfort.

"Indifference is unacceptable even for laymen, and all the more so for the clergy. An honest, spiritual man doesn't do anything with indifference. "Cursed be he that doeth the work of the Lord deceitfully," says the Prophet Jeremiah (Jer 48:10). There's a war on today, a holy war. I must be on the front lines. There are so many Marxists, so many Masons, so many Satanists and assorted others! So many possessed, anarchists and seduced ones! I see what awaits us, and it's painful for me. The bitter taste of human pain is in my mouth."

Elder Paisios was a monastic of Mount Athos. An ascetic, he was known by his visitors for his gentle manner and acceptance of those who came to receive his advice, counsel, and blessing. His words of counsel continue to be published.