Alaska is where Orthodox Christian missionaries — monks from Valaam Monastery in Lake Ladoga, north of St Petersburg, Russia — first brought the Orthodox Gospel of Jesus Christ to America in 1794. By the grace of God working through the faith and sanctity of St. Herman, Elder and Wonderworker of Alaska, the Priest-Martyr Juvenaly and others who followed them in the 19th century, Alaska continues to have a vibrant Orthodox presence to this day.

Make no mistake, this new mosque project is not a wonderful fruit of 'multiculturalism' (which, like Islam, is always out to destroy Orthodox Christianity), but as with all mosques, is an early stage of jihad, a frontier outpost in Islam's efforts to dominate the globe.

As you read this article, keep in mind that four separate studies over the last fifteen years consistently show that upwards of 80% of all mosques in the United States teach, preach or support jihad, and the replacing of the US Constitution with Sharia law, documenting also the foreign funding of mosques by Saudi Arabia and other sources of Islamic extremism. Links to the studies and more mosque info here. 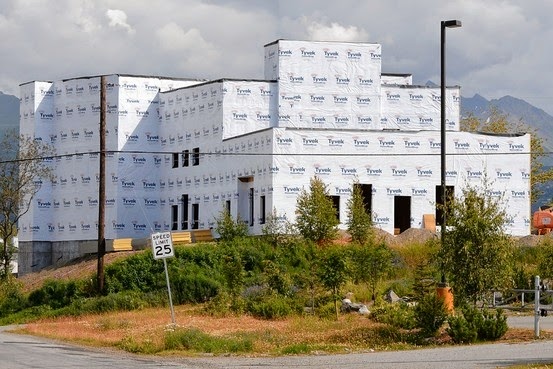 On the edge of this northern outpost an unfamiliar sight is emerging: twin minarets. Alaska’s small but growing Muslim community is building the state’s first newly constructed mosque.

All too familiar for anyone watching the death and destruction Muslims are bringing wherever they go.

“This is our future,” said Osama Obeidi, one of the Muslim-Americans leading the building effort for the Islamic Community Center of Anchorage. “We have second-generation Alaskans now, and new people coming all the time. We need a place to call home.”

The 15,000-square-foot mosque, taking shape near a Sons of Norway Viking Hall, will eventually include a Sunday school and a community center. Heated floors will make worship in the bitter winters more comfortable.

The mosque is perhaps the clearest sign yet that Islam in the U.S. is rapidly pushing beyond traditional population centers such as Detroit and Los Angeles. As the number of American Muslims grows through both immigration and higher-than-average birthrates, domes and minarets are sprouting in areas as varied as the eastern mountains of Kentucky and Louisiana’s parishes.

The building boom reflects American Muslims’ desire for a sense of permanence as their religion shifts from one mainly imported by immigrants to one practiced by their American-born children and grandchildren, Muslim leaders say.

The Muslim population in the U.S. is expected to more than double by 2030, to 6.2 million, according to a 2011 Pew Research Center study. By then, Muslims are expected to represent 1.7% of the U.S. population, making them as numerous as American Jews or Episcopalians today, the study says.

By 2030 it’s likely to double that estimate with Obama’s preference for Muslim refugees and illegally importing millions of people from the Middle East and Africa. The Muslim population has grown it’s fastest since Muslims attacked America on 9/11.

A 2011 survey of U.S. mosques found a 74% increase in the number of Muslim congregations established between 2000 and 2011, rising to 2,106 from 1,209. About 30% of those congregations built new mosques, said the report sponsored by the Hartford Institute for Religion Research and a coalition of Islamic organizations.

Where did the money come from to build all these mosques, many of extravagant size and cost. And what’s being taught in them?

Even as their presence grows, Muslims continue to struggle to find their place in American society. A Pew Research study released in July showed Americans view Muslims “more coldly,” or negatively, than any other major religious group—including atheists—on a so-called “feeling thermometer.”

Though there is at least one other congregation in Alaska worshiping out of an existing space, Anchorage, with a population of about 300,000, has been one of the few sizable U.S. cities that lacked a purpose-built mosque, U.S. Muslim leaders said.
So far the mosque, which has its minaret bases but not yet its towers, hasn’t been met with much opposition, as projects have in some other parts of the country, say local Muslims and police. The only incident of note was when some Bibles were left at the construction site. They were donated to a Catholic school.

Fifteen years ago, Anchorage’s Muslim community was small enough to gather in an apartment for services. About seven years ago, the congregation began renting a 1,200-square-foot storefront in a strip mall. Over the last five years, its numbers have risen, mostly due to refugee-resettlement programs.

The congregation finally scraped together enough money to break ground on the new mosque in 2010. So far, the project has cost roughly $2 million; completion is expected to require another $1.5 million.

The last time we checked in on Alaska they were banning sharia law and had caught a local Muslim whose jihad hit list included members of media, military.